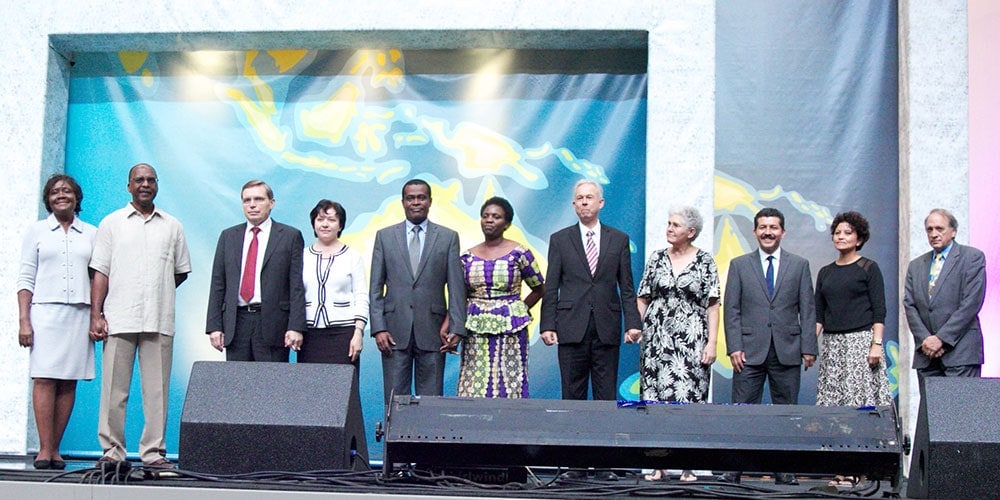 A slimmed-down leadership team of six general vice presidents has been elected to the General Conference and charged with helping implement three mission-oriented goals that the Seventh-day Adventist Church intends to prioritize over the next five years.

“There will be a very strong emphasis on mission,” General Conference president Ted N. C. Wilson said Monday as he assured delegates that the smaller team would be able to help steer the church’s work.

Several delegates still questioned the decision on Sunday and Monday, with one saying it was odd to reduce leadership at a time when the Adventist Church is experiencing unprecedented growth. A vote on the nominations was postponed until Monday so concerned delegates could speak with the Nominating Committee.

Simmons, the first woman to serve as a general vice president of the Adventist Church who was first elected in 2005, said change in organizational leadership structure is always a part of growth.

“We just need the wisdom of God to know what change is for His honor at any given time,” she said in an interview.

The new leadership team will be tasked with pursuing the Adventist Church’s three goals of emphasizing Christ and His righteousness; faithfulness; and the involvement of every church member in evangelism and witness. Wilson identified the three goals as his top priorities after his reelection last Friday, and the new general vice presidents spoke eagerly about fulfilling them.

“All mission is eventually local,” said Lemon, former president of the Mid-America Union Conference in the North American Division.

He said he would like to see the Adventist Church get to the place where its members are so connected in their local communities that a community would feel a huge loss if the church went away.

“I believe we have become rather inward focused to the point that it wouldn’t matter in a number of places around the world if our churches burned to the ground,” he told the Adventist Review. “That is huge.”

He said Adventists have to be more than the hands and feet of Jesus.

“We have to be the boots that get things done in our communities,” he said.

Biaggi, an Argentine national who has lived the past 15 years in Russia as president of the Euro-Asia Division from 2010 to 2015 and division treasurer before that, said he longed to see every church member reach at least one person for Christ per year.

“Then that person would reach another person and fulfill the mission of the church,” he said.

De Los Santos, a Mexican national and former vice president of the Inter-American Division, underscored the importance of humility in serving others.

“I think we need to understand the necessity to be humble before God and to stand before people to serve them,” he said.

Guillermo E. Biaggi served as president to the Euro-Asia Division since 2010, and prior to that served as treasurer of the same from 2000-2010.

Biaggi’s previous church work includes administration and finance throughout several church organizations around the world for more than 40 years.

His leadership in the Euro-Asia Division saw the expansion of evangelism impact in urban centers in dozens of cities across the territory. In addition, Adventist schools increased in number under his leadership from 5 to 26, and a theological seminary in Ukraine was established.

Born in Argentina, Biaggi worked 25 years in the South American Division as university vice president of financial affairs at the River Plate Adventist University, Argentina. He also served as treasurer of the Austral Union Conference and secretary-treasurer of the Uruguay Mission, as well as senior accountant and assistant accountant.

Biaggi, 62, is a certified public accountant, holds bachelor’s degrees in business and theology, and completed a master’s degree in administration and a doctorate in ministry from Andrews University.

He speaks fluent Spanish and English, and understands Portuguese and basic Russian.

Biaggi and his wife, Sybel, have four adult children all working for church organizations. He also has three grandchildren.

Abner De Los Santos served as vice president in charge of member retention in the Inter-American Division since 2010.

Ordained in 1991, De Los Santos, 52, earned a master’s in pastoral ministry from Andrews University and completed a doctorate degree in ministry from the Inter-American Theological Seminary in 2012.

De Los Santos is married to Leticia. The couple has two adult children.

Thomas L. Lemon began his career as a pastor in Maryland and later pastured in Texas. In 1996, he accepted a call to serve as assistant to the president of the Rocky Mountain Conference. He then was ministerial director in Oregon (2002-2006) and president of the Minnesota Conference (2006-2009) before accepting the position of president for the Mid-America Union Conference.

Lemon has served as a member of boards of directors for a number of higher education and health-care institutions, as well as media and outreach ministries.

During his tenure as president of Mid-America Union, Lemon’s stated areas of focus were evangelism, education, and health care.

Lemon’s wife, Jan, is a career educator. The couple has two adult children and four grandchildren.

Geoffrey G. Mbwana was elected as a general vice president for the Seventh-day Adventist General Conference in 2010.

Born on October 20, 1955, in Tanzania, Mbwana spent time in high school and college working as a literature evangelist in India and Sweden. Mbwana graduated from Spicer Memorial College in 1982 with bachelor’s degrees in religion and psychology.

Ella Simmons holds the distinction of being the first woman to serve as a vice president of the Seventh-day Adventist world church. Simmons was elected at the 2005 General Conference Session, held in Saint Louis, Missouri.

An educator throughout her career, Simmons has served as chair for departments of education (Kentucky State University), associate dean (University of Louisville), and professor (Oakwood University, La Sierra University).

Simmons has been a prominent member of accreditation and corporate boards within the church and in the community. She holds a master’s degree from Andrews University and a doctorate from the University of Louisville.

Simmons and her husband, Nord, a retired high school teacher, have two adult sons who are also educators: Darryl and Christopher.

Artur A. Stele was elected as a general vice president for the Seventh-day Adventist world church at the 2010 General Conference Session in Atlanta, Georgia. He was born on January 30, 1961, in Kaskelen, Kazakhstan.

He graduated from Almaty Medical College in Kazakhstan in 1979 with a degree in pharmacy.

In 1986, Stele received a bachelors degree in theology from Friedensau Adventist University in Germany. That same year Stele married Galina, the first woman to graduate from Andrews University with a doctoral degree in ministry.

The couple has a son, Alexander. Stele earned his master’s and doctorate in theology from Andrews University in 1993 and 1996.

Stele’s denominational service includes time spent as academic dean and president for Zaoksky Theological Seminary, as well as president of the Euro-Asia Division. Stele is fluent in Russian, German, and English. 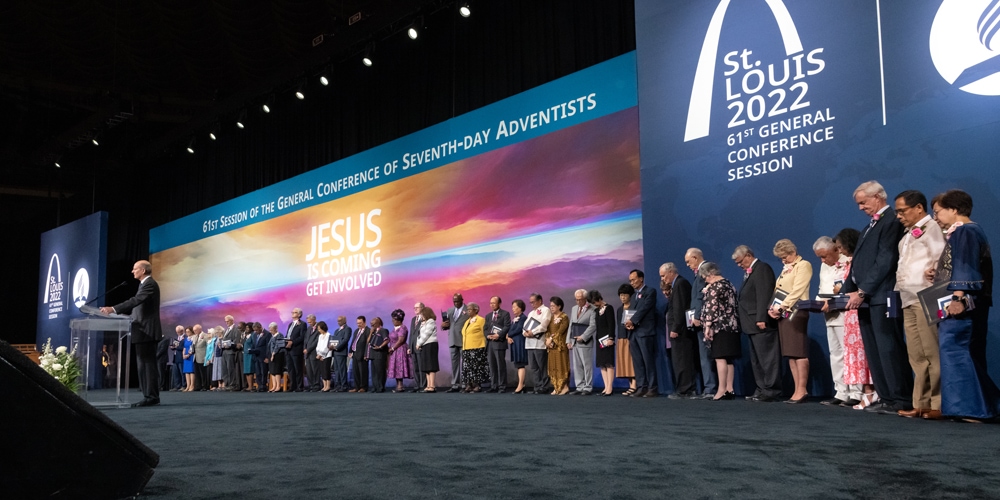