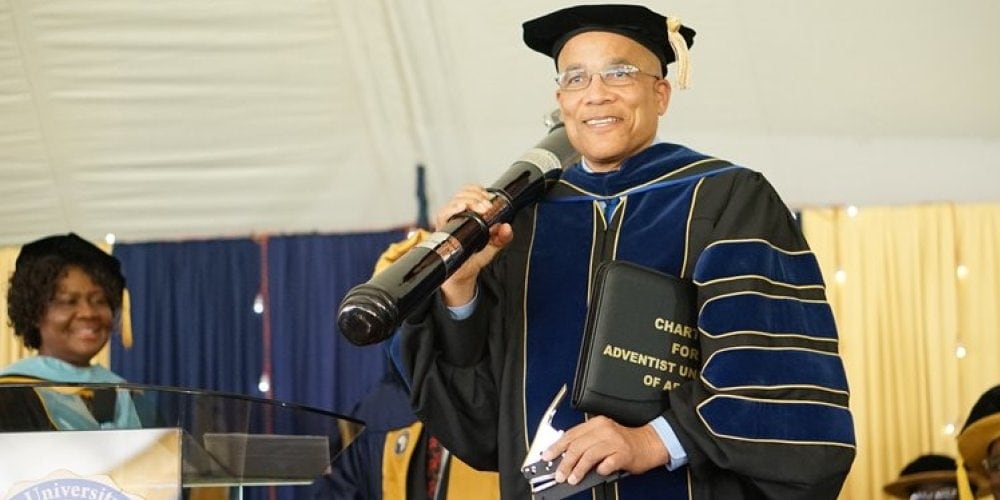 The Adventist University of Africa (AUA) in Kenya has inaugurated Delbert Baker as its new vice chancellor at a two-day celebration attended by church and governmental officials.

Baker was introduced by his son, Benjamin Baker, who serves as the associate director of the Office of Archives, Statistics and Research of the Adventist Church.

In his remarks, the new vice chancellor challenged the university family to join him in pursuing “unstoppable advancement, academic excellence, and adventures under the Almighty.”

During the ceremony, the chancellor of AUA, Blasious Ruguri, said: “We are delighted to welcome Dr. Baker to the vice-chancellorship of one of the greatest Adventist universities in the world. He has an outstanding reputation as both a denominational and academic leader in the Adventist church. We look forward to working with him to help take AUA onward and upward.”

Baker has a Ph.D. in organizational communication. He is also a certified executive leadership coach and a certified trainer in emotional intelligence. He has authored more than 15 books, including From Exile to Prime Minister: The Life and Leadership of Samson Kisekka; Make Us One: Celebrating Spiritual Unity in the Midst of Cultural Diversity; and The Unknown Prophet: The Life and Times of William Ellis Foy.

Throughout the years, Baker has been dedicated to the work of the church, community building, evangelism, and the development of students and leaders with a focus on excellence.

In 1975, Baker married Susan (Lee). Their marriage has formed the foundation of their collective ministry. Susan holds a doctorate in science (Loma Linda University, 1999) and has had a notable career in physical therapy, administration, and education. The Bakers have three adult sons: David, DPT, physical therapist; Benjamin, Ph.D., historian; and Jonathan, MS, human resource professional. They have three grandchildren: Isabella, Zachary, and Jackson; and two additional grandchildren who are scheduled to arrive later this year.

Though based in Kenya, AUA is directly affiliated with the Adventist Church’s world headquarters and offers Adventist graduate-level education throughout Africa. Doctoral programs are taught on its main campus, and other programs — such as theology and business — are taught by revolving faculty on Adventist campuses throughout the continent.