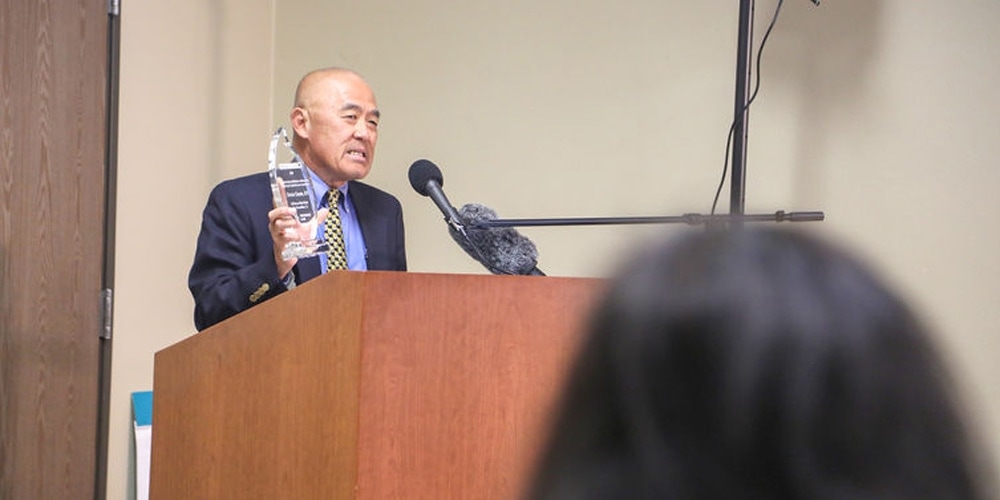 Nurse Dexter Emoto, a post-anesthesia care unit and recovery room nurse at Loma Linda University Health, has been inducted into the national Fresenius Kabi Donation Hall of Fame for his blood donations through the years.

“I’ve always had a passion for helping people, and at the time, I simply hoped someone could benefit from my donation,” he said in reminiscing about the beginning of his journey giving blood.

Emoto has donated more than 113 gallons (about 428 liters), making him one of the highest-giving blood donors in the western United States. That blood has helped nearly 1,500 individuals, according to an estimate by Lifestream, the company that provides lifesaving blood products and services in southern California.

Representatives from Fresenius Kabi, an organization that specializes in lifesaving medicines and technologies, inducted Emoto into its national Donation Hall of Fame for his contributions on November 6, 2019.

Emoto began routinely donating blood at Lifestream in San Bernardino, California, in 1982 after transferring from PUC to Loma Linda University School of Nursing, which is part of the Seventh-day Adventist educational institution in Loma Linda, California.

“I realized I could benefit the patients in my local hospital by donating,” Emoto said. “Almost all of my donations have come to the Loma Linda University Medical Center, where it goes to the patients I care for daily,” he added.

Since graduating from nursing school in 1977, Emoto has worked as a nurse — as well as a mentor for student nurses — with Loma Linda University Health. “I want future nurses to know that the blood they hang [in IVs] is coming from a volunteer,” Emoto said.

“People who give blood do so because they have a passion for helping people. Those donations could save someone’s friend or family member,” he said.