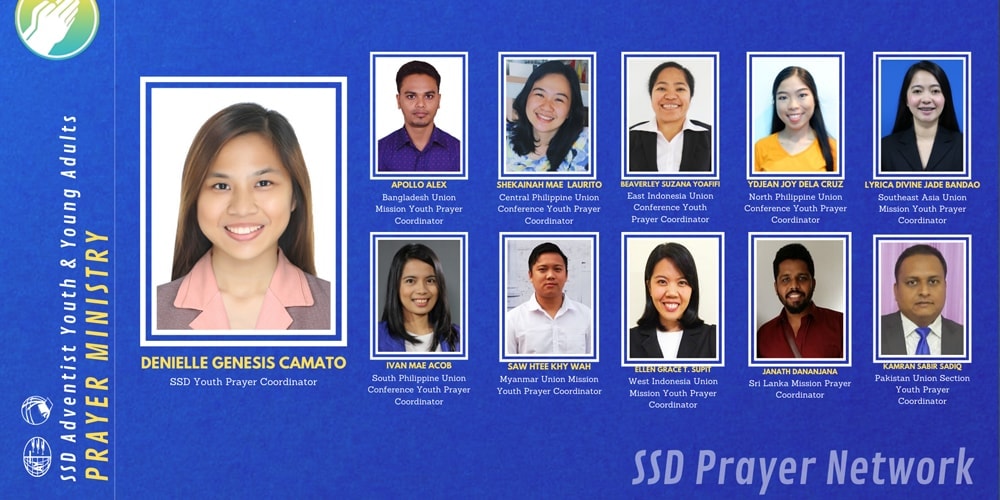 To embrace the prayer revival brought about by the 100 Days of Prayer initiative, the Southern-Asia Pacific Division (SSD) Adventist Youth Ministries (AYM) Committee has voted for the organization of prayer networks.

Prayer networks are an aggregation of Seventh-day Adventist young people distributed across 14 countries within the SSD territory. Their goals are to pray for each other, embrace a prayerful life until Jesus comes, emulate Jesus Christ’s prayer lifestyle, and intercede for the church’s ministries and mission.

Leaders said all young people across the SSD territory are invited to join the network.

In its regular meeting on June 5, 2020, via Zoom, the SSD AYM Committee approved the creation of the AYM Prayer Ministry to oversee the creation and activities of the prayer networks throughout the division territory. The AYM Prayer Ministry envisions strengthening the prayer life of young people. It is tasked with inspiring the youth to develop a close relationship with Jesus, leaders said.

“Regions across the SSD where prayer networks have already been organized are taking the lead in impressing the prayer habit among the young people in their territories,” leaders said. “The aim is to have a youth prayer network in each local church.”

“They are excited to pray because of the prayer network. They are requesting more and more prayer fellowships,” Das said.

“We see people gathering in homes for prayers and worship more regularly than ever,” he said. “There is a sudden change in the atmosphere. Prayer has brought changes in the attitude of many people. The youth are praying for those who are in need.”

Beulah Vidayo, a Prayer Network leader from the North Philippine Union Conference, explained that through the prayer network organization, young people in his region are enjoying more the privilege of praying.

Vidayo said that he has personally experienced God’s miracles in his life and finds it a driving force in his experience going forward.

“I am moved to help other young people to experience claiming God’s promises through this Youth Prayer Network,” he said.

“It’s a huge blessing to be connected to the SSD prayer group that is starting among young people,” Walter said. “I am so thankful for you, for participating in this important work of intercessory prayer, united prayer, which I believe will bring true revival and reformation.”