Where Did We Get The New Testament?

The Spirit has guided, and still guides into truth. 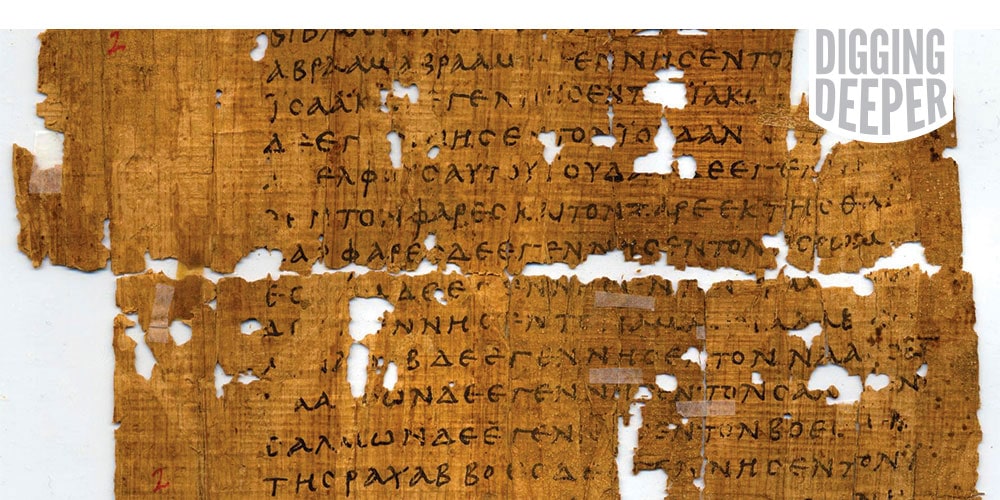 Bishop Athanasius was worried about the church members in his region of Alexandria, Egypt. He had fought tooth and nail most of his life against people who claimed that Jesus was a created being.1 One of the problems was that people were promoting books filled with these and other teachings supposedly written by apostles or great Christian leaders. The situation was confusing people, and Athanasius wanted to put a stop to it.

The bishop in A.D. 367 penned a circular letter that laid out just which books should be accepted as part of the Old and New Testaments. In this letter for the first time we have the list of 27 books together that we call the New Testament.

But such a story raises the question: Did the New Testament as we know it not exist until nearly 320 years after the first Gospel or letter was written?2 If so, doesn’t that call into question how we can be certain that this group of books is ordained by God? While the story of the New Testament is long, it is quite interesting, and actually builds our confidence in God’s protecting hand over His Word.

The New Testament and Christianity arose out of the life, ministry, death, resurrection, and ascension of Jesus Christ. According to our best and earliest evidence, He chose 12 men to be His emissaries (minus Judas and adding Matthias). After His ascension these men became the foundational witnesses of early Christianity. An important addition to their number came a few years later with the conversion of Saul of Tarsus, who became known as the apostle Paul (Acts 9).

As these leaders traveled throughout the Mediterranean world establishing churches, it quickly became apparent that the needs of the churches and mission fields exceeded the resources of time and people available. Paul might be in Ephesus when the church in Corinth needed his counsel. Peter might be in fetters when the churches of Asia Minor were being infiltrated by false teachers. To respond to these problems from a distance, the apostles wrote letters to congregations, individuals, and sometimes believers in a wide area. In addition to this, as Irenaeus,  an ancient church leader, wrote, apostles and their companions wrote out the story of Jesus in what we now call the four Gospels.3 In this way the story of Jesus could be told and studied everywhere.

What did early Christians do with these books? From what we can tell, they treasured them deeply. Far and away, the New Testament is the best-attested document from the ancient world. It has thousands of manuscripts ranging from the smallest fragment of a few verses to entire volumes containing all the books we now call the New Testament. The evidence is overwhelming that these were highly treasured books.

Discerning the truth requires a willingness to follow it wherever it leads.

And no wonder: they were written by eyewitnesses of the greatest events the world has ever seen, and by individuals who talked with the eyewitnesses and documented their stories.4 The apostles spoke with an authority that gripped people’s attention. They claimed that their message came from God Himself: “For we were not following cleverly made up stories when we made known to you the power and coming of our Lord Jesus Christ. On the contrary, we were eyewitnesses of His majesty. He received honor and glory from God the Father when addressed in such a manner by the majestic glory, ‘This is my beloved Son in whom I am well pleased.’ We heard this voice addressing us from heaven when we were with Him on the holy mountain" (2 Peter 1:16-18).5

It was an unforgettable experience, burned into their hearts. They spoke and wrote as men with certainty about what they saw. The authority comes across clearly in their writings. Paul speaks of this power in his letter to Timothy: “All Scripture is God-breathed and is profitable for teaching, for reproof, for correction for training in righteousness, in order that the man of God may be fully qualified, equipped for every good work” (2 Tim. 3:16, 17).6

The apostles believed that their message came from God and was consistent with the Old Testament (Acts 2:14-36), that the same Spirit that worked in the ancient prophets worked in their lives as well, enabling them to share the message of God in a trustworthy manner.7

Early Christians copied these writings of the apostles and began reading them in their church meetings. Justin Martyr, a Christian leader of the second century AD, describes a Christian service: "The memoirs of the apostles or the writings of the prophets are read, as long as time permits; then when the reader has ceased, the president [of the assembly] verbally instructs and exhorts to the imitation of these good things.”8

However, even from the beginning of the Christian church, false teachers and their writings began to crop up.9 In the second century, documents that falsely claimed to be written by apostles and other early Christian leaders promulgated ideas completely contrary to the teachings of the apostles and the early church:  books such as the Gospel of Thomas, the Gospel of Judas, and the Gospel of Peter.10 How was the church to respond to such falsehoods?

To protect the Christians from being led astray by crafty charlatans, early church leaders promulgated three tests of genuine books.11 Was the book written by an apostle or a companion of an apostle (the eyewitness test)? Did the book teach doctrines consistent with the body of beliefs that came down to the church from the Hebrew Scriptures and the apostles’ teachings and writings (the doctrinal test)?12 Was the book used widely by the churches (the consensus test)?13 The main use of these principles was to weed out false writings from those that were genuine. The genuine would be the Canon, the test or rule of all else.

This situation leads to an important concept in describing the origin of the New Testament. Did the church set the Canon, or did it simply recognize that which was canonical? The first position is often known as the Communitarian view of Canon formation. In this perspective the early church had the authority to set the Canon and to teach its members which books to accept and which to reject. The problem with this position is the way that it places the church above the Canon.

In the other view, often known as the Intrinsic Canon view, the church recognized the canonicity of genuine documents because these documents carried the telltale signature of the Holy Spirit’s inspiration, a sense of authenticity inherent within the books. We see this type of perspective in such texts as John 7:17, where Jesus says, “If someone wants to do His will [the Father’s will], he will know about the teaching, whether I speak from God or from myself.” And Paul wrote:  “And we speak these things not by human teaching in wise words, but instead by the teaching of the Spirit, interpreting spiritual things to spiritual people. Now the secular person does not receive the things of the Spirit of God. They are foolishness to him and he is not able to understand them, because they are spiritually discerned” (1 Cor. 2:13, 14).

It is not that God has set some people on a secular path so that there is no hope for them to respond to Him. On the contrary, He is not willing that any should perish but that all should come to repentance (2 Peter 3:9). But discerning the truth requires a willingness to follow it wherever it leads. This is what makes possible the ability to recognize the intrinsic authority of the Scriptures when the Holy Spirit touches our heart. It requires coming under the instruction of the Bible, letting its message clean away that which
does not belong.

The three tests the early church came up with to weed out noncanonical books are consistent with the Intrinsic model of the Canon. Written by an apostle or his companion was a historical necessity for eyewitness testimony. The doctrinal test was a recognition of the books that held the precious treasure of the apostles’ teachings and were consistent with the Hebrew Scriptures. And consensus was a symptom of the recognition of the underlying authority of inspired books. What blessed the churches to grow and thrive was itself a result of the work of the Holy Spirit. As Jesus said: “A good tree cannot produce evil fruit, nor can a rotten tree produce good fruit. Every tree that does not produce good fruit is cut down and cast into the fire. So then, by their fruits you will know them” (Matt. 7:18-20).

Eventually, early lists of books began to circulate, such as the Muratorian Fragment (from the second century A.D.), and Athanasius’ letter (fourth century A.D.), referred to at the beginning of this article. These were simply end products of the lengthy process of people coming to recognize the inherent authority of the books inspired by the Holy Spirit. The process was lengthy, which should give us confidence in the tried and true nature of these books. Forged on the anvil of hard-won experience and trial, the New Testament still speaks to us today with conviction and power.