When the Chalk Dust Settles

Should Adventist education adapt or stay the course? 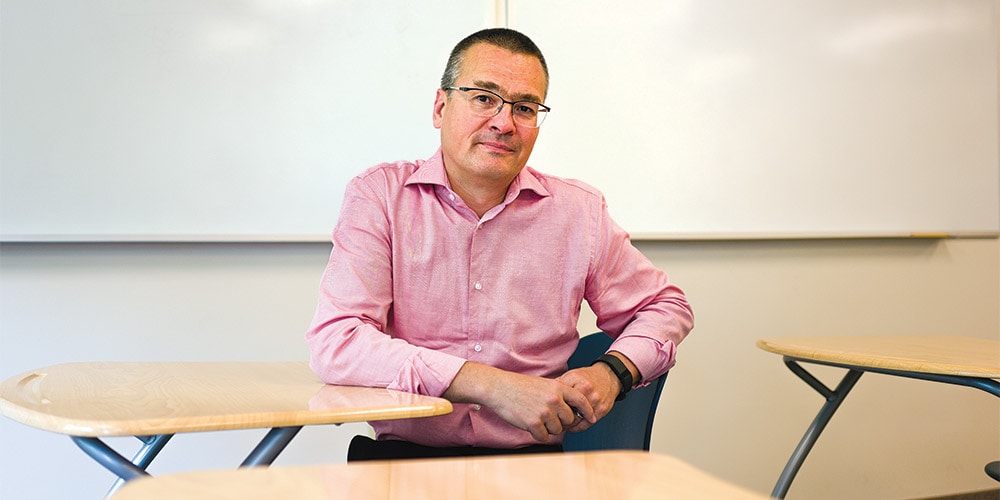 In the highest sense the work of education and the work of redemption are one,” wrote Ellen White more than 100 years ago.1 This statement has become one of the most frequently quoted dictums of Adventist education. Yet I wonder, Are we all agreed on its meaning as we face the challenges of a media-saturated and increasingly secular and complex twenty-first century?

What does this statement mean for a professor in a school of business at an Adventist university?

How does it impact the teaching style of an elementary school or high school teacher in a small one-room Adventist school somewhere around the globe?

I first read this line during a class on Christian education when I started my theological training at Bogenhofen Seminary in Austria. Before coming to Bogenhofen, I had never studied at an Adventist school in my entire school life. In fact, there were no Adventist schools in West Germany when I grew up, except for a boarding academy hundreds of kilometers away from home. Born and raised in Germany, I was the product of a high-quality, secular educational system run by the state. I still vividly remember thinking What’s the fuss about Adventist education? as I sat in class during my first week at Bogenhofen. Mathematics, literature, chemistry, physics, biology, history, or languages do not require Adventist schools and teachers. Or do they?

That one class was transformational—perhaps even more so than other classes that could be considered “more Adventist.” In fact, following the completion of my doctoral dissertation in 1995 I became one of the thousands of worldwide Adventist educators and served as professor of Old Testament and Ancient Near Eastern Studies at a number of Adventist universities and graduate schools around the globe. The Adventist educational bug had bitten me.

Worldview is the underlying operating system that governs our values, choices, and decisions. We have a worldview, even if we have not consciously thought about it. Like a computer operating system, nothing goes without this. So what does worldview have to do with Adventist education?

In a sea of relativism, uncertainty about absolutes, a basic evolutionary philosophy underpinning science and life as a whole, and secularism, the Adventist worldview stands out as a sore thumb. We Adventists believe in Creation (even though I recognize that a growing minority, including at our universities, questions this belief). We believe in a personal Creator and Redeemer who has revealed Himself in Scripture and nature. Even without looking in the mirror, we realize that we are in dire need of redemption. So we gaze at the cross—and beyond. We know that a loving God will make an end to suffering, pain, and sin when He finally returns and gives this dying planet a complete makeover. We recognize that wherever we are, we are part of this cosmic conflict that has been raging on and off screen for millennia. We want to go home.

“What do we do when we cannot find highly qualified Adventist teachers who subscribe to the Adventist worldview?”

Adventist educators who have consciously internalized this worldview will teach differently. For nearly two decades I taught biblical Hebrew and biblical Aramaic to undergraduate and graduate students. I wanted my students to be linguistically proficient and capable translators and interpreters of ancient Hebrew and Aramaic texts. We read biblical texts as well as texts outside the biblical canon. As we learned how to pronounce strange-looking consonants written from right to left, as we analyzed forms and syntax, my students often were surprised at the way a well-known biblical text suddenly got new life by translating it from the original Hebrew. Unscripted, deeply spiritual conversations often began as a result of this, and I was glad to give the time needed. It helped my students connect linguistics to worldview.

Here is a potential problem: What do we do when we cannot find highly qualified Adventist teachers who subscribe to the Adventist worldview? There are parts of the world where Adventist education is growing so rapidly that we struggle to maintain a steady stream of master- or doctoral-level Adventist professors. Furthermore, even qualified Adventist teachers who got their graduate degree at a public university may require a specific course about the integration of faith and learning and the Adventist worldview. There are many ways of doing that, but online offerings (such as from the Adventist Learning Community) seem to be particularly good avenues. We can get students from around the world into the classroom of an Adventist professor teaching about the integration of faith and learning without having to leave home.

A crucial element of Adventist education involves the harmonic development of all parts of a human being, including emotions, intellect, and physical capacities. Once Adventists realized that the work of education and the work of redemption are essentially one (something that took quite awhile according to Adventist historian George Knight), and prodded by God’s special messenger, Adventists began to include physical work in their school systems. Students cleaned dorms; students planted crops; students learned how to fix cars. This offered many advantages. Instead of sitting in front of a book (or screen) for 15 hours, the daily “disruption” of manual labor helped to refresh minds and steady emotions.

When I studied at Bogenhofen between 1984 and 1986, we religiously (I think that’s the right word) had two work afternoons every week. I learned how to clean a large chicken stall (don’t get me started) and perfected my grass racking techniques. Others learned how to set up a computer network or lay Ethernet cables. As the assistant men’s dean I spent quality time working with other students in a variety of places. Not everyone was enthusiastic about this program, but everyone felt refreshed from the change of rhythm and activities.

Many Adventist colleges or universities used to have such programs. Yet government regulations, complex insurance and labor laws, and Zeitgeist have nearly killed it in North American Adventist education at the college level. We need to think creatively about how we can apply the important principle of heart, head, and hand in Adventist education in 2016.

On a recent visit to one of the larger Adventist educational institutions in South America, I felt encouraged by its approach to heart, hand, and head. With more than 5,000 students on its main campus, a traditional work program would be nearly impossible to administer. Yet based on Ellen White’s counsel of practical training (the “hand”), it started a “Fit for Life” program and established a practical skill campus for its students. Each student will have to learn one skill every school year. Practical skill classes include cooking, baking, hair cutting, computer design, gardening, and many others.

While the practical challenges of implementing the biblic
al perspective of the unity of heart, hand, and head are significant, the future of Adventist education requires creative, out-of-the-box thinking to apply these important principles to the twenty-first century.

Who Can Pay for All This?

While I cannot claim expertise on financial matters, let me offer two distinct perspectives. The first is that of a parent paying for three children in Adventist educational institutions. Adventist education is expensive—period. In North America it requires two incomes, even considering the generous educational tuition help offered to church employees. Even though my daughters have canvassed and worked hard in other summer jobs earning money, the times one could work and study at the same time, covering all educational costs, seem to be over. Scholarships offer additional help, and North American Adventist institutions are working hard to keep prices low, but somehow we need to find ways to help our students to graduate without the suffocating burden of major debt.

“Too often we confuse cherished past tradition with eternal principles.”

Here’s my second angle: As a former faculty member of several Adventist universities around the world, I know that our educational staff (on all levels) is not teaching at an Adventist institution to become rich. My monthly salary as a full professor at one of these major universities outside of the U.S. was the equivalent of $400 a month. As a family we managed to live on that, but it was tough. And for many of my colleagues with children in university it was nearly impossible. The balancing act between paying a reasonable salary and keeping Adventist education affordable is difficult. Let’s recognize the financial sacrifices these employees make because they believe in Adventist education.

Missiologists tell us that successful cross-cultural ministry requires careful, Spirit-guided, and principle-based contextualization. My sense is that Adventist education needs to develop this important skill set even further in order to survive. Based on an Adventist worldview and understanding of the wholistic nature of Scripture-based education we are now ready to face the twenty-first century. Or are we? Too often we confuse cherished past tradition with eternal principles.

Innovation and contextualization will have to go hand in hand. Growth may not always be our ultimate goal, even though I can see the benefits of scale on many levels. But as an increasing number of businesses are discovering, more, bigger, larger, or faster is not always better. Many of these businesses have decided that high quality may ultimately top growth. The lessons we are just beginning to learn from this post-growth movement may also be helpful when we think about Adventist education.3 Smaller may actually be better, as it offers opportunities for more personal attention and relationships.

Why Are We Here?

The early history of Adventist education is not marked by ringing successes. Adventist historian George Knight has chronicled some of the ups and downs of these early developments in a movement that expected the imminent return of Jesus. Answering the letter of a reader of the church magazine, James White wrote in a note published on December 23, 1862: “The fact that Christ is very soon coming is no reason why the mind should not be improved. A well-disciplined and informed mind can best receive and cherish the sublime truths of the Second Advent.”4

Once the movement caught the vision of the importance of an Adventist educational system, however, the primary focus was on preparing workers capable of advancing the mission of proclaiming the soon return of Jesus. Mission became the driving force for establishing educational entities. Ask Ferdinand and Ana Stahl how they tackled their tough assignment in the Andes around Lake Titicaca. Against the express will of the governing elite they established educational institutions that empowered the indigenous population and created a path for successful mission work. The results of this strategy can still be felt today.

Mission needs to be the driving force of Adventist education. We don’t principally educate so that our graduates will earn big bucks or get nominated for a Nobel prize. We train wholistically so they can serve Jesus in the marketplace as business managers, teachers, graphic designers, nurses, doctors, physical therapists—and yes—as pastors leading a congregation.

I hope that mission continues to be one of the driving forces of Adventist education. Imagine the impact the tens of thousands of college graduates from institutions around the world could have as tentmakers in the Middle East. Would they be known for their integrity, honesty, creativity, ability to resolve challenges, and their capability of independent and critical thinking? Would they be able to dream big for Jesus and think “around the corner” as they anticipate the blessed hope?

Gerald A. Klingbeil is an associate editor of Adventist Review, and also serves as research professor of Old Testament and Ancient Near Eastern Studies at the Seventh-day Adventist Theological Seminary, Andrews University.