The Violence of Silence

Sometimes silence is not an option. 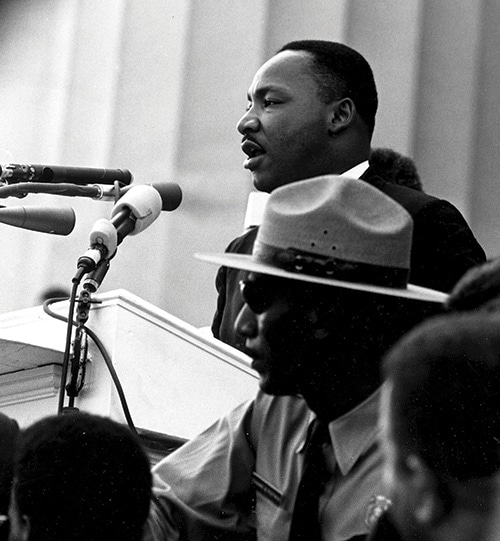 African American civil rights leader Martin Luther King, Jr., is well known for his doctrine of direct action, nonviolent resistance.1 King remarked, “Darkness cannot drive out darkness; only light can do that. Hate cannot drive out hate; only love can do that.” Using this principle, King and his followers advocated for racial desegregation, and voting and civil rights for African Americans in the United States.

While imprisoned for protesting segregation, King from his cell chided his White ministerial colleagues. In his “Letter From a Birmingham Jail” King wrote, “We will have to repent in this generation not merely for the hateful words and actions of the bad people, but for the appalling silence of the good people.”2 This violence of silence can be found both in the Bible and in Seventh-day Adventist history. But the antidote is found in Christ.

The Silence of Peter

It was a night that would forever live in infamy. As Jesus prayed for the sins of His enemies, they came to arrest Him. The growing crowds had gathered around Jesus in the Temple court for the past few days. Fear of losing political power and disagreement about religious doctrine spawned a hatred that would lead to death. Caiaphas used hate speech to rally his threatened base to commit the unspeakable crime of crucifying our Lord. It was an act of religious and political terror. The contrast between love and hate could not have been more stark. The Bible records the trial transcript:

“If we let him go on like this, everyone will believe in him, and then the Romans will come and take away both our temple and our nation. Then one of them, named Caiaphas, who was high priest that year, spoke up, ‘You know nothing at all! You do not realize that it is better for you that one man die for the people than that the whole nation perish’” (John 11:48-50).

Words matter. The words of Christ always inspired toward life. But the words of Caiaphas incited violence and death. So in a darkened garden, armed agents of death came to arrest Jesus, the Prince of Life. Words matter.

Even speech is easier to see than silence. But violent hate speech may not trump the subtleties of violent silence. The violence of silence occurs when one should speak but does not. When one is silent in the face of evil and injustice, or when one hides out of convenience or expediency, then the subtle passivity of silence can be as deadly as the commission of a violent act.

On the night of Christ’s arrest there was not only the violent hate speech of Caiaphas but also the violent silence of Peter’s refusal to speak up for his Lord. When he should have stood with Christ, Peter denied Him. Peter could have given testimony about the One who had healed his mother-in-law and taught him to walk on water, who had raised the dead and opened the eyes of the blind. But no voice of support could be heard..

During the greatest moral crisis of the universe, Peter’s support failed as he convinced himself that if he was not the one slapping Christ he was absolved from guilt. As King remarked, “The ultimate measure of a man is not where he stands in moments of comfort and convenience, but where he stands at times of challenge and controversy.”3

The Silence of the Church

After the enemy attack on Pearl Harbor in 1941, U.S. president Franklin Roosevelt declared that persons of Japanese descent posed a security threat. Between 100,000 to 120,000 persons, including hundreds of Seventh-day Adventists, were placed in internment camps throughout the United States. An Adventist internee, Richard Iwata, appealed to General Conference president J. L. McElhany, to make a statement about the injustice done to Japanese Americans. Iwata wrote, “One principle stands out boldly midst the turmoil of evacuation. . . . The rightful privileges as American citizens [were] suppressed by racial discrimination.”4

The officers’ meeting minutes from six weeks later record this lamentable response: “Agreed, That the chairman be asked to inform Richard Iwata that we do not feel that as a religious organization we can interfere in the matter referred to in his correspondence, since it is essentially of a political or government nature.”5

King’s doctrine critiques such silence. “History will have to record that the greatest tragedy of this period of social transition was not the strident clamor of the bad people, but the appalling silence of the good people.”6

During the rise of the National Socialist Party in Germany prior to World War II, many in the church supported Hitler’s regime as ordained by God. Because of “his personal dedication and his abstinence from tea, coffee, alcohol and meat, practices shared by the Adventists, . . . he was welcomed as a savior.”7 The president of the East German Conference argued that it was bad for the image of the church when some members refused to salute the swastika flag or use the Hitler salute. Eventually the Adventist Church in Germany would lead the German welfare program, support forced sterilization, and exclude persons of Jewish background from its fellowship.8 While there was some resistance to the Nazi regime within the church, many were silent.

Whether the position was born out of expediency, cowardice, or politics, the silence spoke loudly. King’s words offer a stinging rebuke: “He who passively accepts evil is as much involved in it as he who helps to perpetrate it. He who accepts evil without protesting against it is really cooperating with it.”9

In the United States speaking has led to acts of unspeakable violence. During a Sabbath service on October 27, 2018, a man armed with an assault rifle and three handguns shouted anti-Semitic slurs and opened fire inside the city of Pittsburgh’s Tree of Life synagogue. He killed 11 congregants and wounded four police officers and two others.10 Three days earlier, an armed assailant had attempted to gain access to the predominantly African American, First Baptist Church in Jeffersontown, Kentucky. After not gaining access, the White man made his way to a local grocery store, where he targeted and killed two African-American patrons.11

During the same week a series of pipe bombs were sent in the mail to the homes of former presidents Barack Obama and Bill Clinton, as well as sitting U.S. legislators, activists, and political and intelligence leaders.12 On October 2, 2018, ricin particles were detected in mail sent to the Pentagon addressed to Secretary of Defense James Mattis and Chief of Naval Operations John M. Richardson.13

It is possible to argue that these events were merely the brainchild of demented lone wolves. Yet, it is reasonable to recognize each of these incidents as representations of hate. Victims of the threats and attacks were targeted because of their religion, ethnicity, or political affiliation. The awful specter of open bigotry now wanders abroad, fueled and guided, among other things, by vitriolic public discourse. And although the stories rehearsed here arise out of an American context, religious, ethnic, and political bigotry and hostility are not limited to any one country.

For Christians, this is a pivotal moment. It challenges us to speak in the name of the Prince of Peace, to vociferously repudiate the demons of violence and hatred. We must not be silent. We cannot run for cover and pretend that if we choose to ignore it, it does not exist. Nor can we argue that working for love against hate is beyond the purview of Jesus and His church. Nor can we retreat into apocalyptic passivism positing that all these things are just signs of the end and Jesus will fix it all when He returns. The rise of hatred is a sign of the times. Our streets are stained with blood, our children cower in fear, and evil parades with torches of terror in our parks. Real people are dying. If we choose to be silent, our silence is consent to evil.

To call upon our God to act yet refuse to act when God calls upon us is spiritual schizophrenia. Not only is God moved by injustice, but God moves against injustice. We learn from Scripture that in the time of moral and spiritual crisis, God not only moves into action, but also moves people into action.

God called upon Moses to demand of the most powerful ruler in the world the release of the Hebrew captives. God called upon Esther to foil the genocide plot to destroy the Jews perpetrated by racist Haman. These people each came to a moral moment when they had to accept the call of God to speak. Silence would have been violence.

When sin entered the world, God could have remained silent and allowed it to run its deathly course until humanity was self-obliterated. Instead, God intervened and God the Son declared, “Here I am, I have come—it is written about me in the scroll. I desire to do your will, my God; your law is within my heart. I proclaim your saving acts in the great assembly; I do not seal my lips” (Ps. 40:7-9). Into the crisis came the Christ, declaring love in a world of hate, peace in a world of war, hope in a world of despair, life in the face of death. And 2,000 years after His ascension, Christ still speaks above the vitriol of small minded people, and the language of His love looms larger than that of bigotry and hatred.

This is our moral moment. We must heed the call and choose a response. The call may come to each of us in a different way. I dare not be so bold as to limit how God speaks or declare how He must speak to you. But I will be so bold as to say that God does speak and that He always looks for a response.Closing with King’s words: “There comes a time when one must take a position that is neither safe nor politic nor popular, but he must take it because conscience tells him it is right.”14

Dedrick Blue is dean of the School of Religion at Oakwood University.