The Other Side of the Door

Who could be knocking at this time of the morning? 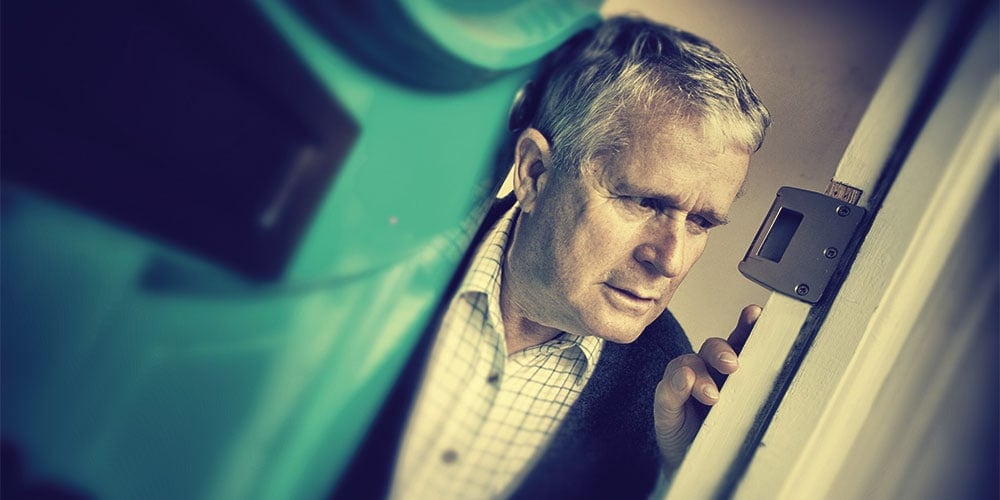 One Sunday morning about 7:30 I was in bed, somewhere between comatose and dreamland. Fortunately, my wife doesn’t sleep as soundly as I do, and she woke me from my slumber. Sure enough, someone was banging on our front door.

We lived on the ground floor in an apartment complex. People had to pass a locked outside gate, and a locked entrance to the stairwell, to get to our front door. The question was not only why but also how someone happened to be banging on our door.

I wasn’t awake enough to process those questions just yet. I stumbled out of bed, slipped a jacket over my pajamas, and made my way to the door.

Outside in the stairwell stood a man who didn’t look particularly happy. He was wearing jeans, socks, but no shoes, and was naked from the waist up. I noticed his red eyes and sensed quickly the stale smell of alcohol. In his right hand he brandished a metal bed frame.

Mark, as he was called, admitted to getting drunk the night before. But he had no recollection as to how he ended up spending the night on the carpet at the top of the apartment stairwell amid some random furniture. He made the assumption, clearly so in his mind, that someone within the complex had played a prank on him. Not only had they left him there the previous evening—they had taken his shoes, his wallet, and his phone.

If those indignities weren’t enough, they had also apparently urinated on his jeans!

I like the idea of being God’s agent to transform messy lives.

So there he was, out to find who had done it and make them pay.

I daresay I do not make a very intimidating figure in my pajamas. Other than being quite tall, I am not very aggressive. Nor was I sure what this visitor was capable of. So, whether by instinct or preference, I spoke to him calmly. I asked him questions. I answered his questions honestly. I even offered some suggestions.

It must have worked. Right before my eyes he began to soften, and even shook my hand when I introduced myself.

I quickly got dressed after closing the door. But Mark was still out there, somewhere, and I couldn’t settle. He was not my responsibility; let’s be clear about that. I don’t know how he got upstairs, but it certainly wasn’t my doing. My door was closed now; couldn’t I leave it that way?

He’d done a fair bit to get himself into this mess, couldn’t he get himself out of it? Maybe he would learn a lesson in the process.

But I couldn’t settle. He was still out there, on the other side of the door.

So back out I went. He was now locked out of the stairwell. He seemed almost more disoriented than 10 minutes earlier. I started talking to him again. He borrowed my phone to call his own number. Lo and behold, his girlfriend answered. It seemed that she was less keen to see him this morning than I had been. That became clear as he handed the phone back for me to talk to her.

He sat down with his back against the wall to rest his broken toe, so I sat beside him. I asked him where he worked. Did he want a drink of water? No. Did I have a cigarette? No.

The sun was warm; maybe that softened him further. When I suggested for the third time that I take him home, he painfully rose to his feet and accepted the offer. Pulling into his driveway about five minutes later, he was almost apologetic that he couldn’t give me anything in return. Not that I needed anything. I could go home now and know that he wasn’t on the other side of the door.

So what neat, tidy moral can I pull from this experience? Well, a few actually.

First, if you hadn’t picked it up already, stay away from alcohol. Keep your brain cells and your dignity.

Second, a wise man once said, “A gentle answer turns away wrath” (Prov. 15:1). How else could a hungover, half-naked man come to the point of being a “friend” in the space of a half hour?

But what most echoed through my mind was the vivid recognition of two intertwined realities. First, how much God wants to connect with a world of messed-up people. How can He possibly do that when they make it so hard for Him? And at what point was Mark going to realize that a night of drinking and its aftereffects isn’t all that it’s cracked up to be? When was he going to figure out that there might be something better?

Those questions bring us to the second reality: God wants to connect with a world of messed-up people for sure, but He wants to do it through us. Yes, the Holy Spirit is active and engaged, working on people’s hearts. And yes, I believe salvation is a transaction that ultimately takes place between individuals and God. But when it comes to demonstrating the better way of life that we so eloquently talk about among ourselves, that is a task given to us.

Maybe someday Mark will have an epiphany. He will wake up somewhere else on a Sunday morning with another headache, another broken toe, and suddenly realize that he has been sold a dud. That maybe he ought to look to God, go to church, read a Bible.

It could happen; but that scenario is usually God’s Plan B. Plan A is to put Mark in proximity with someone who can demonstrate that better way of life and introduce him to it.

I’m not sure if that scares me or excites me. I think it’s supposed to be the latter. Could I have said more to Mark? Did I do enough? Still, I’m glad I didn’t leave Mark on the other side of the door. I’m glad I was able to help him a little.

Maybe in a small way I was able to be a channel for God to connect with Mark. I do like the idea of being God’s agent to transform messy lives.

Who in your life lies on the other side of the door? Are you more comfortable if they stay out there while you keep your place of security? Are you content to leave God with Plan B and settle for that? Or do you want to be an agent for God in changing messy lives also?

Derek O’Hare lives in Kwinana, near Perth, Australia. He works as a hearing specialist and attends the Seventh-day Adventist church in Rockingham.