The Early Church and Compassion

There was a reason early believers were called Christians. 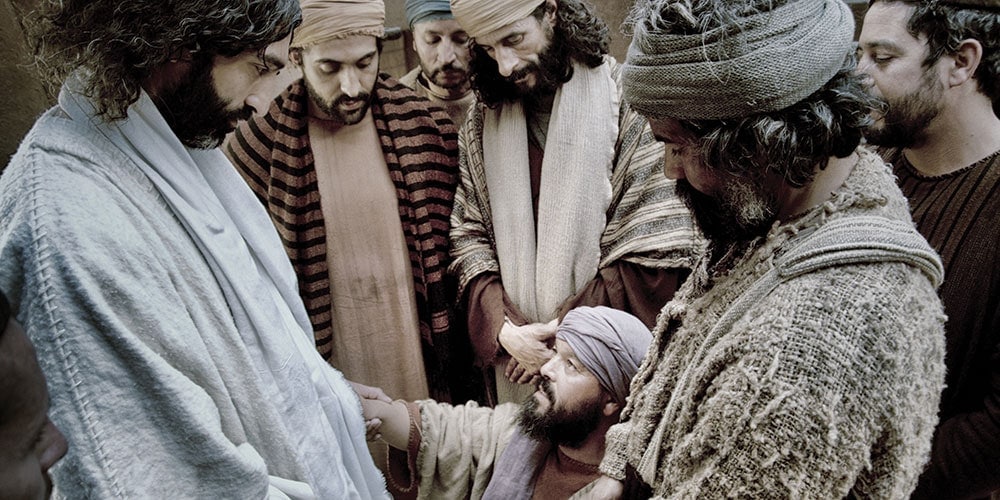 No Hope Without God

But a brilliant confusion has distracted the nations. The theory of accidental development from nothing to something, from something to something conscious, from something conscious to someone responsible, is not a theory of hope. A theory of bullying, maybe, but not of caring. Semblances of caring occur because entities sometimes end up in relations that profit both parties. This mutual self-interest is said to be enlightened. Mostly, the “light” of hope that nations find in that scenario is being remembered by later generations—until life on this planet comes to its whimpering, hopeless end. No logic of pity debilitates the framework of natural selection and the survival of the fittest. “Having compassion one of another” (1 Peter 3:8, KJV) is not part of the macroevolutionary schedule. Instead, it engenders materialistic measurements of life in which society’s less useful may be thought expendable in times of national economic emergency.3

Oddly enough, millions who claim hope in Christ have united Him to this theory of intolerance. But Jesus is the hope of nations because, instead of bullying and exploiting, He constantly opens His hand—“at the proper time”—to make sure we all “are satisfied with good” (see Ps. 104:27, 28). Christ’s kingdom confounded the reigning political power from the beginning. Its principles were incompatible with whatever made sense to Rome. Marullus, of Shakespeare’s first act and scene in the tragedy Julius Caesar, denounces the frenzied populace that hail Caesar’s triumphant entry into Rome and “strew flowers in his way that comes in triumph over Pompey’s blood.” Slaughter is how Caesar achieved conquest. Christianity, in contrast, is not a story of bloodshed, but one of shed blood, the blood of “the messenger of the covenant” (Mal. 3:1), the one who incarnated the message of the covenant and, in delivering that message, confirmed the covenant with His shed blood.

Compassion is always connected to Jesus more than all its other usages combined.

The covenant had been long agreed upon and long misunderstood. Its promises had been variously repeated to multiple historical characters, including a man called fraud, earnestly struggling for moral victory over himself. Until the God whose grace alone granted him his holy victory, rewarded him for it, and changed his name to prince and conqueror (Israel, Gen. 32:28). His father and grandfather had received the covenant before him; as had diluvial Noah, and Edenic Adam.

Fathomed or distorted, the promise was constant: it came stunningly from the Lord Almighty to Jesse’s last son, David: “I have been with you wherever you have gone. . . . Now I will make your name great. . . . I will raise up your offspring to succeed you, . . . I will establish the throne of his kingdom forever. . . . Your house and your kingdom will endure forever . . . ; your throne will be established forever” (2 Sam. 7:9-16). “Forever,” “forever,” “forever!” The Lord Himself would name an everlasting dynasty after the former sheep minder.

Despite the triple forever of the covenant’s Davidic articulation, the infinite dimensions of its promise are never more graphically and profoundly symbolized than when Abram’s—later Abraham’s—God, under cover of night, in the form of  “a smoking firepot with a blazing torch,” passes between portions of animal carcasses He had instructed Abram to lay out on ground promised to him and descendants beyond him (Gen. 15:1-21).

Those pieces of meat the fire passed between spoke of the broken body of God’s incarnate Son as the way God’s covenant would be kept. This did not accord with the ritual protocols. In those ancient agreements unfaithful parties agreed to be slaughtered, as the animals had been, if they violated the terms of the covenant. It is wonder enough that God should name His own everlasting dynasty after a former sheep minder. But the wonder of all wonders, for Adam and me and all humanity, is that the impeccable God should bear torture for guilt that I earned by rebellious disobedience: God’s broken law demands the life of the guilty;4 but God so loves guilty me [and you], “that he gave his one and only Son, that whoever believes in him shall not perish but have eternal life” (John 3:16).

His covenant with humans has never depended on our politics or genetics; or been influenced by our genius for faux scientific racial distinction, or thoroughly scientific biological discrimination. It has always been the promise of His unfailing love to us all, an all-embracing incorporation where “there is no Gentile or Jew, circumcised or uncircumcised, barbarian, Scythian, slave or free, but Christ is all, and is in all” (Col. 3:11).

It has never been less than that, and His “all and in all” leaves no room for more than that. From Adam to Jew and Gentile, God’s covenant with fallen humanity has always been a commitment founded on compassion: “the Lord was gracious . . . and had compassion and showed concern . . . because of his covenant” (2 Kings 13:23).

Jesus came to teach compassion to His church and to the whole world. His first followers learned to care by being with Him. Speaking of the ordination of the 12 apostles, Ellen White comments that “the first step was now to be taken in the organization of the church that after Christ’s departure was to be His representative on earth.”5 That long-term goal depended directly on His immediate intention—that they be with Him (Mark 3:14).

Being with Him was primary. They would also do other things—go out and preach (verse 14); even sensational things—perform exorcisms (verse 15). But most of all they would be with Him. Being with Jesus means being in school: “Come to me. . . . Learn from me” (Matt. 11:28, 29). Jesus called them so He could “send them forth as His witnesses, to declare to the world what they had seen and heard of Him.”6 He knew what they needed to learn: “all their weaknesses and errors were open before Him,”7 and many of their strengths before us: money (Matthew and Judas), thunder (James and John), skepticism (Philip and Thomas), braggadocio (Simon Peter), nationalism (Simon the Zealot). Compassion? Not listed.

Being with Jesus would teach them compassion, for being with Jesus meant being with compassion. A comparison of English Bible versions provides simple instruction on this truth. The word “compassion” appears 18 times in the New American Standard Bible’s New Testament; of those 18 times, Jesus is speaking it or being spoken of 13 times. A selection of other versions shows 14/22, 8/14, 8/12, and 7/10.8 Despite the different translation strategies of these versions, compassion is always connected to Jesus more than all its other uses combined. The King James Version also features a single instance in which, rather than speaking or being spoken of, Jesus is addressed by a father on behalf of his son: his word speaks to Jesus as a source of compassion, and one who may be moved by compassion. The father begs, “Have compassion on us, and help us” (Mark 9:22, KJV). It is the wavering hope of a desperate parent; sentiment couched in uncertainty; tentative insight demanding both clarification and categorical emphasis; help from Jesus: “If [He] can do anything” (verse 22, NIV).

Compassion was a motive force impelling all areas of Jes
us’ ministry.

And what is His response? “When Jesus landed and saw a large crowd, he had compassion on them, because they were like sheep without a shepherd. So he began teaching them many things” (verse 34). “Interrupted as He was, and robbed of His rest, He was not impatient. He saw a greater necessity demanding His attention as He watched the people coming and still coming. . . . He found a convenient place where He could minister to them.”9 He had come to earth to teach the truth about compassion, about the God who long ago had promised that humanity’s faithlessness would never exhaust His compassion. If they would repent, “the Lord your God will . . . have compassion on you and gather you again from all the nations where he scattered you” (Deut. 30:3). And so it was that He, “being full of compassion, forgave their iniquity, and destroyed them not: yea, many a time turned he his anger away, and did not stir up all his wrath” (Ps. 78:38, KJV). In the end, He Himself would incarnate faithful Israel and guarantee, by His sinless and perfect substitution, the application, to whosoever wills, of every blessing and profit of the everlasting covenant (1 Peter 2:24).

Jesus’ disciples did learn compassion. They learned, and taught it to the world. They learned and taught so well that onlookers labeled them Christians—because they all were so much like Jesus the Christ: selling “property and possessions to give to anyone who had need” (Acts 2:45); maintaining a program of daily food distribution (Acts 6:1); institutionalizing mechanisms within the body of Christ that would ensure fair provision for all who were in need (verses 1-6); sharing sacrificially, beyond political and geographic borders, with fellow believers who were in difficulty, sacrificing out of their “overflowing joy and their extreme poverty” (2 Cor. 8:2; see entire chapter).

Early church leader Peter indicates that compassion became Christians’ climactic understanding of following their Lord: “Finally, all of you, . . . be compassionate and humble” (1 Peter 3:8). John showed that apart from compassion, Christian profession is a lie: “If anyone has material possessions and sees a brother or sister in need but has no pity [‘compassion,’ KJV] on them, how can the love of God be in that person?” (1 John 3:17).

Christianity’s legacy of compassion has blessed the globe. As nations everywhere confront current public health challenges, they are acknowledging a Christian heritage that now serves all peoples, all faiths, and all political hues. For it was the Christian response of care for the victims of pestilence long ago that invented hospitals. Today, many hospitals have become centers of care, service, and scientific research. As they participate in pursuit of the next vaccine that will deliver us from current global evil, it is not inappropriate to acknowledge the debt owed to early Christians and to their Lord Jesus Christ, the God who is full of compassion (Ps. 86:15).

Lael Caesar is an associate editor for Adventist Review Ministries.