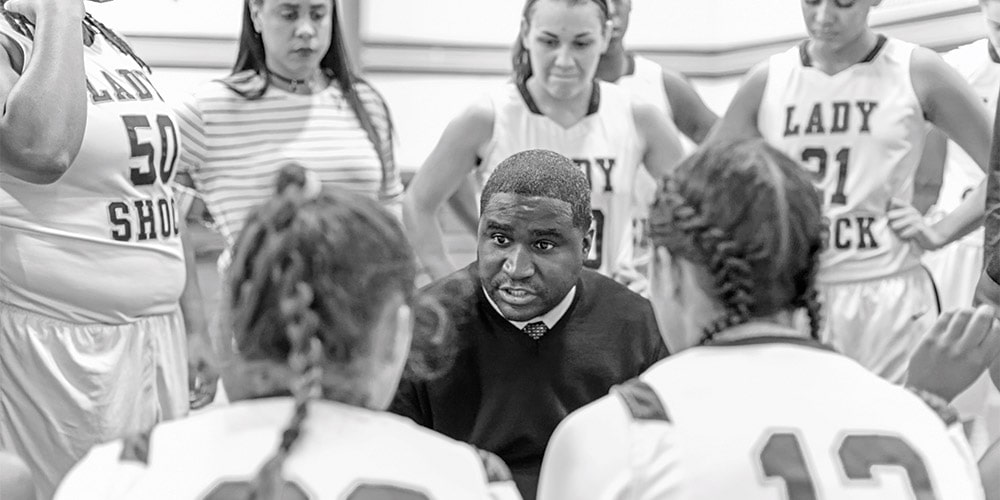 Can a team of highly driven young female basketball players and their equally dedicated coach find a heightened sense of spirituality from their sport? For Washington Adventist University’s basketball team, that seems to be exactly what happened. I sat down with Coach Jered Lyons to talk about it.

Coach Lyons, you coached basketball outside of the Adventist system before coming to Washington Adventist University a few years ago, and you say that your work passion meets your faith here. Tell me about that.

I’ve been fortunate enough, in the places where I’ve worked, to be able to share about my faith, particularly the Sabbath. So I’ve been blessed to have had bosses who have been very understanding and allowed me not to have had to participate in certain areas. But now, to be at a place where you can pray freely, you can talk about Jesus and having a relationship with Him—well, that’s invaluable. It is really hard to describe, because I’ve been places where we have been told not to pray with the team, so to be able to speak freely and openly about my life experiences and share Christ [with my players] is amazing.

I’ve heard you have a unique approach to coaching, bringing your work passion and your passion for Christ together. You also bring a very spiritual sense of guidance to these young women. Talk about that.

Up until this point, I’ve coached on the men’s side. So this was definitely a leap of faith. On the outside looking in, it seems like it’s different. But I think there are a lot of similarities in the fact that a lot of players have come from broken homes and maybe do not have a positive male figure around. There are a lot of things that happen in society that happen, and oftentimes we don’t talk about it. So we try, as those issues come up, to talk about it. There are many issues of racial tension, religious liberty, etc. And for me, at WAU, which is a mission field inside of a mission field, most of my team are not Adventists. So when they come to the school, not only are they learning about what it means to have a relationship with Christ, but they are learning about the Adventist faith as well.

How are these athletes who are not from Adventist backgrounds finding their way to WAU?

We recruit; we recruit year-round. Basically, my philosophy is about being upfront with our recruits and saying, “Hey, this is a Christian environment. [Washington Adventist University] is a Christian university, welcoming all faiths. I’m a Christian coach, so we’re going to share Christian values with you. We’re not going to force you, because at the end of the day Christ wants us to choose to have a relationship with Him.” So I think by being upfront and honest about that during the recruitment process kind of opens their eyes, because it is not something everybody is talking about. It’s unique and different in that sense, and I know some are looking for that. They might not say it, they might not know it, but they’re looking for it.

You’re a Christian coach. What is your coaching style like?

I’m very passionate. I believe Colossians 3:23, which says, “Whatever you do, work at it with all your heart, as working for the Lord, not for human masters.” I’m also very relational, so I want to give them freedom. But I’m passionate, so I do raise my voice. I wouldn’t say I’m any different from any other coach, except in that I’m a little more laid-back. But when the time calls for energy or passion, I do provide that.

How do you encourage your players to come talk with you about issues on and off the court? What are some of the issues they face?

My door is always open. My team members are always hanging around the office, and that’s encouraging, because [it means] they are comfortable. I do feel that God is using me to allow certain conversations, so they come in freely and talk about whatever. One of the themes I’ve been seeing for the past few years is the issues of forgiveness and mending families. We talk about that and God’s desires for families. Because of sin and how it touches everything, including families, we know that God wants to restore families and that that can’t happen without forgiveness. We’ve certainly seen some answered prayers there in regard to that, and I can see some of the young women internalizing that and really thinking about it and taking steps.

How does prayer fit into your practices, before games, with pep talks, etc.?

It’s huge, actually, especially after games, no matter what the result is. This past year, as far as wins and losses, we had a disappointing year, because we set the goals and standards high for ourselves. But I tell the women, “At the end of the day it’s just a game, and you have to leave it at that. You can’t have your identity wrapped up in what you do, because once it’s over, your identity will still be in that, and that’s when depression, and questions about your self-value, can enter in. So a big thing for us is just praying for God’s will, and for Him to help us to understand that it’s just a game, and to utilize it as a tool to build camaraderie and character.