Ministry on the Edge 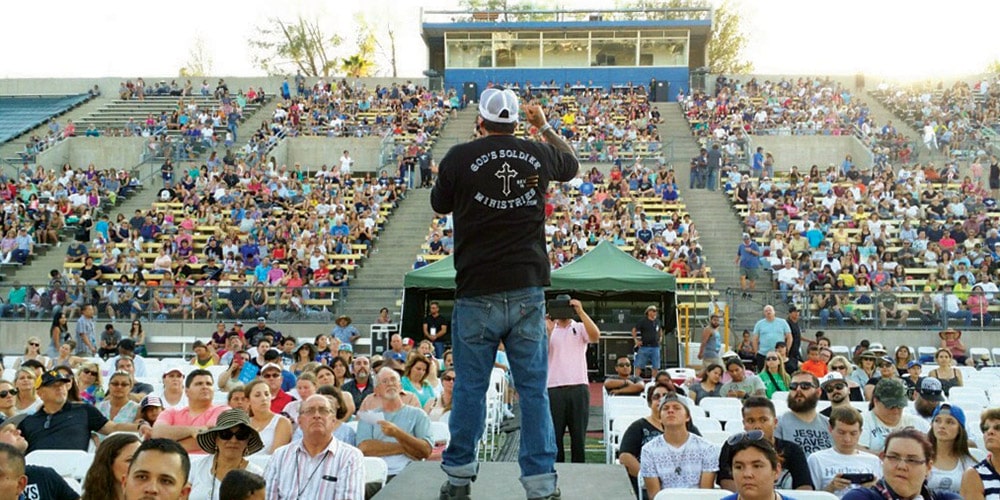 Nicholas “Nico” Hill does not look like an evangelist. Come to think of it, his story doesn’t resemble the story of someone who early on heard God’s call to ministry and spent the next several years responding to God’s voice and honing his evangelistic skills. Nico’s autobiography, Called From the Abyss, is a story of someone fortunate to be alive, let alone a gospel preacher.

And now, with his sleeve tattoos, often-dark clothing, and facial hair more suited to a motorcycle gang than church, Nico takes his message to those who most need to hear it: “the last, the least, and the lost.”

Nico grew up in a nominally Christian home. When his father became physically and emotionally abusive, his parents divorced.

Nico parlayed his interest in martial arts into a quasi-professional career as a stuntman, bit player in Hollywood television and movie productions, and cage fighter. He surrounded himself with women, cash, cars, and eventually drugs. He chose as his public persona “Nico the Dragon.” He had the words “TAKE” “THAT” tattooed on the fingers of his right and left hand, respectively.

But in his battle against evil he was the one getting beaten up. Nico’s downward spiral led him to consider taking his own life. He writes at one point about seeing his reflection in a mirror: “I was looking at a dead man, and the dead man was all there was left of who I used to be.”

Alone, living as a recluse, malnourished and despondent, Nico heard a voice he now recognizes as the Holy Spirit’s. Faced with a stark choice—life or death—he wanted life, but he wondered whether he had passed the point of no return.

A series of providential encounters with friends (some of whom were former addicts) eventually led Nico through recovery from drug and alcohol addiction to the Thousand Oaks Seventh-day Adventist Church and Larry Meager, its pastor. Meager met Nico in the church lobby one Sabbath, struck up a conversation with him, and ended up asking Nico to share his testimony with the congregation the next Sabbath.

Before Nico even went to the church, he remembered stories from the Bible about how Jesus had calmed the seas and cast out demons. He had promised God, “If You’ll let me save others in order to save myself, I’ll walk away from all these demons, drugs, and evil.” Now he had that opportunity.

From Dragon to Soldier

Nico’s transformation from addict to evangelist was fairly rapid. Members of the Adventist church in Thousand Oaks, seeing the power with which he shared his testimony, put up the money for him to attend a four-month training session. That led to a conversation with the late Larry Caviness, then president of the Southern California Conference. Caviness and other conference leaders invited Nico to form his own evangelistic organization. A friend, Holly Anderson, joined Nico as his partner in ministry, and the two of them cofounded God’s Soldier Ministries (GodsSoldierMinistries.com).

Since then Nico has spoken to groups large and small. He particularly enjoys taking God’s Word to high-security prisons. “I go there representing Jesus,” he says. “You have to sign a form saying that if anything happens in the chapel and you’re held hostage, they will not negotiate for your safe release.”

Nico also enjoys speaking to at-risk youth. He goes to schools, halfway houses, juvenile detention centers. “Other denominations bring me in, believe it or not,” he says. “They let me have their pulpits because they know people are going to surrender, and they’re going to have salvation that will lead to baptisms.”

Early in 2017 Nico spoke at a revival at the Laurel Heights Seventh-day Adventist Church in San Antonio, Texas. While in San Antonio he made himself available at Church Under the Bridge, a church founded to serve San Antonio’s homeless population. He also spoke at a shelter for abused youth. “These kids [have been] beaten, molested, raped, and they’ve been in and out of the system, foster homes, and juvenile homes,” he says. “Once the Holy Spirit has taught them that they’re children of God, . . . it starts to change the way they look at themselves. I’m a mirror of conviction; that’s what I am.”

“We’ve been labeled a ‘disruptive ministry,’ says Nico. “When you’re disruptive, having revivals, going to all denominations—from sanctuaries to penitentiaries—yeah, we’re disruptive.”

Debra Brill, a vice president of the North American Division, admits that Nico’s ministry is “disruptive.” “Nico’s ministry uniquely targets those most unlikely to come to church or watch religious media: those marginalized by the larger society, who typically feel the most alone and hopeless. . . . Nico’s message is simply all about Christ’s saving grace for all of us, sinners in desperate need of a Savior.”

Brill points to a growing number of pastors who open their churches at times other than for worship services or Bible studies. She cites Roger Hernandez, ministerial director of the Southern Union Conference, who says that evangelism in today’s culture has to integrate good deeds (compassion), good will (connection), and good news (conversion), all qualities Nico’s “disruptive ministry” has mastered.

Nico, whose given name is David, long ago gave up the title Nico the Dragon, and often refers to himself as David the Dragon Slayer. Through a series of divine appointments, he not only travels around the country speaking to groups, but has conducted radio and television interviews with both Adventist and other Christian media outlets. “That’s only because I’ve made myself available. I truly put everyone and everything in my life behind my love and devotion to my Lord and Savior, Jesus Christ.”

When he’s not on the road, Nico is active in the Eagle Rock Seventh-day Adventist Church. “They’ve opened their church to me,” he says. “They’ve given me the keys to have Bible studies or celebrate recovery.”

Poetry pervades Nico’s autobiography. When we spoke on the phone for this article, he left me with this:

I cannot in good conscience turn a blind eye

To all the darkness, the brokenness, the hopelessness, the addictions, and the homelessness I’m surrounded by.

For this building is on fire, and there are victims inside.

We must be willing to face the flames, pull them out, and point them to our Savior, Jesus Christ.

For I am an evangelist.

Everywhere I go is my church.

Everyone I meet is my congregation.

The reason I’m breathing is to bring souls into God’s kingdom.