Listen to the Word

Not many of us can read Greek and Hebrew, but English translations of the Bible are available! 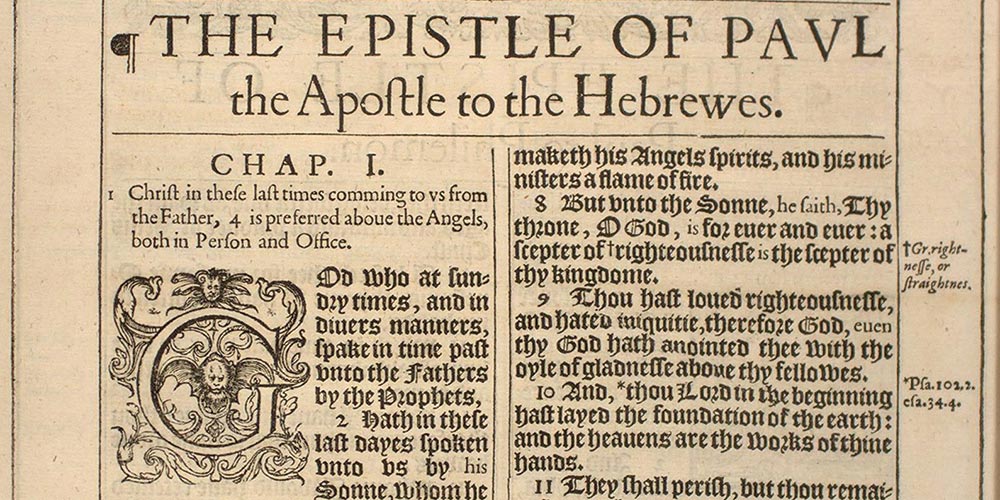 Ancient Bible versions were of vital importance for taking the gospel to pagan nations during the early centuries of Christianity. Similarly, during the time of the Reformation translations of the Bible into the vernacular facilitated the spread of Reformation ideas in Europe. Since then the Bible has been translated into many languages. According to the 2019 statistics of the Wycliffe Bible Translators, the complete Bible has been translated into 698 languages, the New Testament into 1,548 languages, and one or more Bible books into a further 1,138 languages. This makes an aggregate of 3,384 languages, out of a total of about 7,000 languages spoken in the world.1

To translate the Bible into English involves knowing the original languages—­Hebrew, Aramaic, and Greek—­and the skill to write English well. It also requires manuscripts that are as close to the original biblical text as possible. The first complete English translation is credited to John Wycliffe, a lecturer at Oxford University in the fourteenth century. A century and a half  later William Tyndale translated the Greek New Testament into English. Church officials opposed the circulation of his translation; they bought copies and burned them. Tyndale himself, after being betrayed by a friend, was imprisoned and executed in 1536 in Belgium.

After James I became king of England, he authorized a new translation, which since its publication in 1611 has been known as the King James Version (KJV). It captured the best of all the preceding translations and far exceeded all of them in terms of popularity. It has justifiably been called the “noblest monument of English prose.”
2 For more than 400 years the KJV has remained “the Bible” par excellence wherever English is spoken.

Since the time of the KJV, a number of older Greek manuscripts have been discovered. The most important among them are two manuscripts from about A.D. 350. One is called Codex Vaticanus, because it was found in the library of the Vatican; the other is called Codex Sinaiticus because it was discovered in 1844 in the library of Saint Catherine’s Monastery at the foot of Mount Sinai. In 1881 two English scholars, Brooke F. Westcott and Fenton J. Hort, published
The New Testament in the Original Greek, which was based primarily on the ancient codices Vaticanus and Sinaiticus, rather than on Greek manuscripts from the Middle Ages called Textus Receptus (the “received text”), which had been used for the KJV.

Characteristics of Some English Versions

By contrast, the Westcott and Hort Greek text, it is alleged, is based on manuscripts produced during a period of apostasy in the church (i.e., the fourth century A.D.) and not providentially protected from scribal changes. “Translations based on them are therefore unreliable.”
3 These interesting assumptions, however, lack any historical evidence.

It is interesting to note that as far as we know, other European languages do not have this problem with their Bible translations, which are based on the same Greek text as modern English Bibles. Martin Luther’s German New Testament, published in 1522, has undergone many major revisions during this period.

One of the arguments of the KJV-only defenders is the supposed omission of terms connected with the divinity of Jesus. For example, the KJV uses the phrase “Lord Jesus Christ” 80 times (e.g., Acts 15:11; 16:31; 1 Cor. 5:4; 2 Cor. 11:31; etc.). Modern versions use this phrase only about 60 times. The omission of the word “Christ” in 20 texts is seen as diminishing the evidence for Jesus’ divinity. This completely ignores the fact that in a number of places modern versions are stronger and clearer about the deity of Jesus than the KJV. For example, John 1:18 in the KJV says, “No man hath seen God at any time; the only begotten Son, which is in the bosom of the Father, he hath declared him.” Modern versions such as the
New American Standard Bible (NASB) read “only begotten God,” and the New International Version (NIV) translates “but God the one and only” instead of “only begotten Son.”

Two lengthy passages (Mark 16:9-20 and John 7:53-8:11) are not found in the earliest manuscripts. Most modern translations indicate their omissions in the ancient manuscripts in various ways. Because we do not have the original autographs, we do not know whether these stories were lost in the process of transmission or whether they were later additions of oral reports. Whatever the case, the fact that modern translations indicate that these passages are not found in the most ancient manuscripts does not warrant the charge that modern Bibles have changed God’s Word.

We have many modern versions of Scripture today, and any translation is also an interpretation. This has made it necessary to carefully consider which translation we are going to use and for which purpose. First, we need to recognize that there are three basic types of translations:

So which version shall we use? For serious Bible study and preaching, it is helpful to consult several good versions. Good modern standard translations are the NKJV, the NIV, the NASB, and the English Standard Version. For personal and family devotions a paraphrase may offer a fresh way of connecting to God’s Word.

Some of God’s most wonderful work in gospel advance across the earth is done by Bible societies, organizations dedicated to bringing the Word of God to His children in their own language, and disseminating the Holy Scriptures in every creative way conceivable. Figures below are drawn from the United Bible Society’s (UBS) report for 2017,* its latest available, with data collection continuing until the end of March 2018, and responses elicited from 80 percent of the world’s Bible societies. Lines that mention no specific year apply to 2017:

Totals of Bibles by region in 2017