Most of us use social media; some of us know how to use it well. 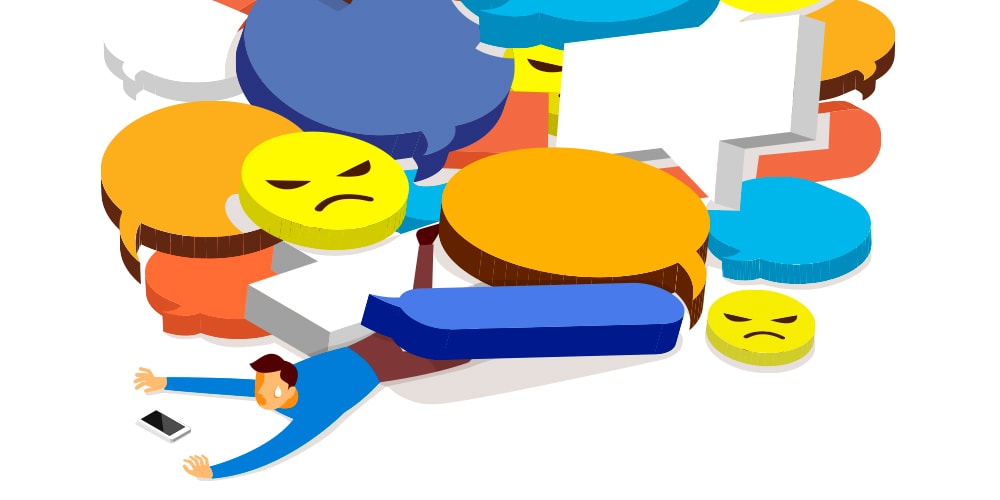 In his famous Atlantic Monthly essay “Is Google Making Us Stupid?” Nicholas Carr argued that the Internet was rewiring our brains and making us less capable of long, sustained reading experiences. Our brains wanted to jump from link to link, not settle down with War and Peace.

That was 2008. Now it’s 2018, and Carr’s arguments seem both overly concerned and prescient. In the past 10 years bookstores haven’t disappeared. And millennials—who grew up with the Internet—actually read more books than those of us over 30.
* Nevertheless, through social media the Internet has significantly transformed the way we communicate with each other: we’re more likely to get our news from social media than our local newspaper; we’re more likely to know what an acquaintance from high school ate for supper than the details of our neighbor’s health (unless, of course, our neighbor is also our Facebook friend); we’re more likely to get into a back-and-forth with a friend’s outspoken uncle than argue with our spouse. These are exciting times. We can sit for hours and look at a screen.

A Link to Family and Friends

Social media is prevalent, and it is changing us. It is changing me. Yet I have an uncool confession to make: I love Facebook, even as I work on drawing boundaries.

I grew up as a missionary kid in Uganda and Kenya, and as an adult I have lived in Thailand, South Korea, Uganda, Austria, and the United States. My life has been a series of awkward hellos and sorrowful goodbyes. Then along came Facebook, a party for introverts, populated by some of my favorite people from around the globe. I can check in with friends from Thailand or swap news with classmates from Minnesota; and sometimes my Minnesota friends and my Thai friends interact, and I think I will swoon from the happiness of it all. My 30 minutes on Facebook turns into an hour and a half; then I have problems (more on that, later).

If Facebook was important in my life before having a child (it was), its value was amplified after my daughter, Kai, was born. My husband, Bryan, and I live far from our families, but through Facebook Kai’s grandparents get to participate in the small moments of her day. They can see pictures of the worms she has dug up, read transcripts of conversations we have had with her, and watch videos my husband occasionally takes and shares.

The last video Bryan posted was of Kai praying a singsongy prayer she had learned in preschool. In Tennessee my sister Sonja responded: “We keep watching this, or rather I keep watching this as I share it with each person in the family. She prays the best prayers!” I read the comment to Kai, and she smiled a shy smile.

Beyond connecting Kai to her faraway family, Facebook gives me a village. Parenting is hard. I can type a question into that rectangle at the top of my newsfeed, and the advice will come.

A Multitude of Counselors

The first time I took a business trip—traveling to Minnesota to teach a writing workshop for ministers—Kai was a baby and still nursing. We had assumed that in my absence she would adjust to formula. She did not.

After talking to my husband on the phone and nearly weeping from anxiety, I turned to Facebook: “Hypothetically, if a 7-month-old baby refuses formula and is away from her mother for a week, what options are there? Solids and water? Juice?”

My question quickly garnered 34 responses, as family members, friends, and acquaintances chimed in. Most gave advice:

“La Leche League may be able to connect you with donor milk.”

“Maybe disguising the formula by mixing it with solids?”

Others offered support: “Sounds like a clear choice for real food. Go, Kai.”

“Praying for you and for her.”

“She’ll be fine. It’s hard, but you guys are doing great.”

I took slow, full breaths.
We are doing great. We are being prayed for. Kai is making empowered choices. Something will work out. I picked up the essays for my afternoon class and reviewed them with a pen. Kai eventually started taking formula by spoon and each day ticked past, joyful by turns and hard. Through it all I felt sustained by a community of mothers. They were the hands and feet of Jesus.

At its best Facebook is this type of community.

At its worst it’s one long argument. Some evenings my smart husband sits on the couch and reads about California native plants, as I get into pointless arguments on Facebook. A week later he’s planting desert mallow while I’m stewing about the (obviously wrong) opinions others hold on guns, women’s ordination, universal health care, or the Oxford comma.

Sometimes, especially since the 2016 presidential election in the United States, it feels as if Facebook has revealed just how little Seventh-day Adventists have in common. Or maybe it has revealed how little we trust each other to ethically arrive at opinions. Our discussion skills, honed through years of Sabbath School classes, are brought out as we attempt to “win” a quarrel. After much research I can report that there is no winning an argument on Facebook. You can lose, though. You can lose your time, your kindness, and your credibility.

In addition to the ways we argue on Facebook, the site creates unrealistic expectations. We see other people living bright and relaxing lives. They take interesting trips, eat great food, and have wonderful relationships. Why can’t our lives be as full? But of course, everyone curates their Facebook posts. I certainly do. If I need to talk through personal problems, I turn to my family. When I photograph my kid, I tilt the camera so that the clutter is out of the frame.

Life is complicated; and while my connections on Facebook are genuine, I purposely cut away from the messiest corners of my life because Facebook doesn’t feel like the right forum. I’m also bored by my repetitive feelings of failure. In the evening, when I once again haven’t accomplished all I had hoped to, my daughter, Kai, might say something funny, and I will sprint for the computer and transcribe it to Facebook. Life, I tell myself, is more than a to-do list.

After Kai’s asleep, I’ll check to see if anyone has responded to her monologue. Once I’m logged onto Facebook, I might get into a conversation. I might scroll through my newsfeed and read articles friends have posted. Then I’ll realize that more time has passed than I intended, and I still need to grade papers and plan lessons. Perhaps I’ll feel like a failure because I waste too much time on social media.

Facebook makes money from ads, and the longer we spend on their platform, the more ads they can sell. The site is designed to keep us there, connecting, yes, but also gazing at a screen when we should be out participating in all the nonvirtual activities that make up a life.

To Connect, Or to Disconnect?

I could close my Facebook account. Many people do. Others take social media breaks—for months or years. One Facebook friend wrote that avoiding the site for even a few days created clarity around how much time she was wasting.

Right now I value the Facebook connection I have created between my daughter and our faraway families. Instead of closing my account, I’m choosing to pay more attention to my use. I’m protecting existing boundaries and drawing new ones.

First, I don’t have social media apps on my phone. When I’m away from my computer, I’m away from Facebook and Twitter. This works for me.

Second, I’m resolving to avoid Facebook arguments. If I find myself trying to “win” a discussion, I’m going outside. Our desert mallow is blooming and covered with bees. I might cut a few stems and put them in a vase. Here are two truths: God’s world is beautiful, and no one is changing their mind during a Facebook argument.

Third, I want to draw boundaries around how much time I spend on the platform. I’ve noticed I get drawn in after my daughter is in bed. A quick peek turns into an hour. Instead of an abstract glance, I will give myself 30 minutes to check in, then I will return to work, or I will read, or I will socialize in person.

Finally, I want to lean into what I love about Facebook. I log onto the site because I want to connect with friends and family. To that end, I want to write more personal comments on others’ posts and in general be a more active participant.

Facebook and other social media platforms have rightfully drawn scrutiny. They are new ways to communicate, and they carry with them new responsibilities and new repercussions. We are wise to consider whether or not we benefit from having an account. (Maybe we don’t!) If we keep our accounts, we can be mindful of how we use them. Facebook doesn’t have to make us mean.

In the end, for me it boils down to this: When I’m on Facebook, am I being kind? Am I being fair? Am I being true?

Sari Fordham teaches creative writing at La Sierra University. You can follow her on Twitter at @sarikarina, where she mainly tweets about books.

Before posting, research whether a story is actually true. Facebook is filled with richly detailed warnings about kidnapping and human trafficking. Both are serious issues, but the warnings posted to Facebook are often false, feeding misinformation and hysteria. Before sharing a story, visit Snopes.com (a Web site that tracks urban legends) and see whether there is any merit to it. In the same way, research all alarming claims before sharing them.

Evaluate Sources. If a headline makes you upset, consider the source. Is it from a reputable organization? Web sites such as Addicting Info (liberal slant) or Infowars (conservative slant) run sensational stories designed to create anger and drive traffic to their Web sites. Don’t promote their false outrage. If a news story concerns you, it deserves further investigation. See how other news sites are reporting the event. Be wary of conspiracies. We’ll be more effective Christian witnesses if we are critical thinkers in all areas of our lives. This has always been true; social media just gives us more opportunities to demonstrate discernment.

Become Familiar With Satirical Sites: Satire provides social commentary through invention. The Onion, the Borowitz Report, and NearlyAdventist are all satirical sites. Share for fun, but don’t take the headlines literally.

Don’t Post Because You Feel Guilty: Memes that say “Share if You Love Jesus” or “One Share = One Prayer” exploit your faith. They might also be involving you in a “like-farm” scam. These types of memes are created to gather likes, shares, and comments and then the page is sold. Ignore memes that ask you to prove you’re a Christian. Instead, write directly about your faith. Authenticity is attractive.