How to Harmonize With the Lamb

Hint: It’s more about the Lamb than it is about us. 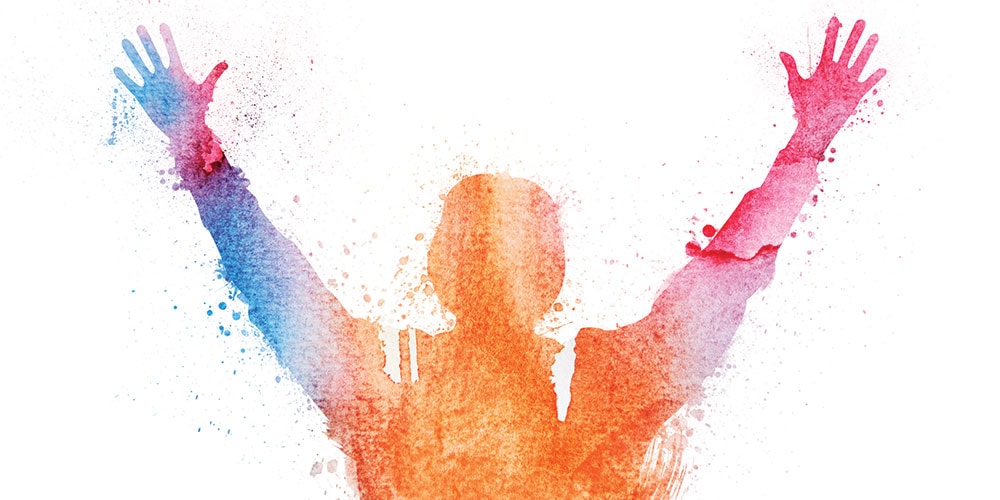 Some years ago, while hard at work on my doctoral dissertation, I was to meet with my dissertation supervisor on a southern California campus. With a few minutes to spare, I went to the campus bookstore.

While there, I took a look at the textbooks my professor had required for the course he was teaching, a class on early Christian worship. One of the required texts was a book by Barry Liesch titled People in the Presence of God: Models and Directions for Worship.

I came across a couple pages that have been important to me ever since. Liesch writes, “Although the book of Revelation has been widely studied . . . as a book of prophecy, what it says about worship has been widely neglected. Yet at least fourteen of the twenty-two chapters deal with worship. Worship is depicted as going on unceasingly before the throne. It is not an ‘interlude’ between a sequence of dramatic scenes, as some have termed it. The reverse is true.

“In the deeper structure of the book, revelatory events [prophetic events, the stuff that happens down here on Planet Earth] themselves are the interludes that break up the practice of continuous worship before the throne of God. Moreover [and here this Evangelical author really starts to sound like a Seventh-day Adventist], worship in the last days becomes a strategic issue. The book unveils overall a cataclysmic conflict being waged across the expanse of heaven and earth as to who is to be worshiped, Satan the deceiver or the Lord God.”

In that light, let’s look at Revelation 15. Let’s look at the beginning and the end, the introduction and the conclusion:

The introduction: “Then I saw another sign in heaven, great and amazing, seven angels with seven plagues, which are the last, for with them the wrath of God is finished” (Rev. 15:1).1

The original “Song of Moses” is a hymn of profound praise and thanksgiving to the Lord.

We watch the drama. The doors of the heavenly sanctuary are thrown open. Seven linen-garbed, gold-sashed angelic warriors emerge. Into their hands are placed golden bowls filled with God’s judgments. As the last bowl touches the hands of the last angel warrior, thick, dark smoke fills the sanctuary, a signal that its mercy-granting, forgiveness-bequeathing business is done.

The frame of our story—its introduction and conclusion—is frightening, intriguing, apocalyptic!

Not long ago Pam and I had the privilege of visiting the National Gallery in London. We stood together looking at one of the world’s great masterpieces, the painting Sunflowers, by Vincent van Gogh.

I’m reading the information placard, trying to grasp the features and importance of this work, when Pam taps my shoulder and exclaims, “Wow! Would you look at that frame!”

Note to Pam: Sotheby’s wouldn’t be interested in the frame! It’s not the frame that’s most important; it’s the masterpiece within it.

According to Liesch, it’s not the stuff that happens down here—including the seven last plagues—that’s most important. It’s the acts and deeds of worship that occur up there, at God’s throne.

In the context of Revelation 15:1-8, it’s not the frame of the seven last plagues that is most important—it’s the masterpiece of worship at the heart of the passage. That masterpiece consists of a description of the choir, the choir directors, and the choir’s song.

This is one of those so-called interludes, in which we are drawn back into that worship service continually conducted at the heart of the cosmos.

The choir: “And I saw what appeared to be a sea of glass mingled with fire—and also those who had conquered the beast and its image and the number of its name, standing beside the sea of glass with harps of God in their hands” (Rev. 15:2).

Now, in Revelation 15, in anticipation of the conflict and fury yet to come, that placid sea of glass is mingled with fire. The members of this massed choir are themselves veterans of great conflict, victors in many battles.

The narrator offers high praise for this choir. They have “conquered the beast and its image and the number of its name” (verse 2). They have vanquished the consortium of evil at the end of time.

The choir directors: “They sing the song of Moses, the servant of God, and the song of the Lamb” (verse 3).

Moses, you will remember, leads the children of Israel out of Egypt in Exodus. At a crucial point in the story, he becomes the conductor of a mass choir. As he directs, he sings in full voice: “Then Moses and the people of Israel sang this song to the Lord” (Ex. 15:1).

So how is it that this song is both the Song of Moses and—simultaneously—the Song of the Lamb? Jesus is the new Moses.

Moses had said, “The Lord your God will raise up for you a prophet like me from among you, from your brothers” (Deut. 18:15).

The life of Jesus—His death, His resurrection, His exaltation, His intercession—represents the new Exodus. Jesus heads the quest for a new Promised Land. He steps to the fore as director of this choir, and with full voice leads them in their hymn of praise. It is the song of Moses and the Lamb because they are the choir’s directors conducting the chorus.

As we prepare to listen to the anthem, we need to poke around in the music library, to search the archives. We find the original, the first “Song of Moses.” Listening to it prepares us to hear this new composition, “The Song of Moses and the Lamb.”

That original “Song of Moses” rings out at the close of a dramatic day. The massed forces of the empire of Egypt hunt down the long-enslaved and recently freed people of Israel. Defenseless, these Israelites are trapped between Egypt’s high-tech military and an uncrossable body of water. The only future they can envision is thousands of graves in the desert.

But God makes a way through the sea. Then comes the song: “Then Moses and the people of Israel sang this song to the Lord, saying, ‘I will sing to the Lord, for he has triumphed gloriously; the horse and his rider he has thrown into the sea. The Lord is my strength and my song, and he has become my salvation; this is my God, and I will praise him, my father's God, and I will exalt him. . . . Who is like you, O Lord, among the gods? Who is like you, majestic in holiness, awesome in glorious deeds, doing wonders?” (Ex. 15:1-11).

This original “Song of Moses” is in the key of praise. It is sung “
to the Lord” (Ex. 15:1), and it is all about the Lord: about His power, His deliverance, His mercy upon the unworthy.

And when, by His grace, we make it to that grand baccalaureate on the other side, our song will have in it not a word of boastfulness, not a phoneme of pride. It will be an ode of praise to “the one seated on the throne and to the Lamb” (Rev. 5:13, NRSV).2

Any song of ours, offered in the key of self-congratulation, rings hollow. It dies on our lips. It isn’t about our accomplishments. It isn’t even about our failings, many as those are. It simply isn’t about us. The original “Song of Moses” is a hymn of profound praise and thanksgiving to the Lord.

It is just such a song that these victorious ones now sing in our heaven-sited liturgy. They are praised by the narrator: they have “conquered the beast and its image and the number of its name” (Rev. 15:2).

They are victors, winners in the culminating scenes of salvation history. They overcome the massed forces of evil at the end of time. High praise indeed!

But their song has in it not a syllable of self-congratulation. It is a song offered only in the key of praise and thanksgiving.

“And they sing the song of Moses, the servant of God, and the song of the Lamb, saying, ‘Great and amazing are your deeds, O Lord God the Almighty! Just and true are your ways, O King of the nations! Who will not fear, O Lord, and glorify your name? For you alone are holy. All nations will come and worship you, for your righteous acts have been revealed” (verses 3, 4).

This hymn offers a powerful message. In this anthem we have access to the set of convictions that has equipped the members of this choir to navigate the worst of times. We have here the essential mind-set for Christian disciples who await Christ’s return. We have exemplified the core convictions, the essential intellectual habits, of true victors.

If, in this moment of great victory, you wish to harmonize with the Lamb, I point you to these four essential habits of heart and mind:

Thankfulness for what God has done.

Wonder at the unlimited nature of God’s power and domain.

Adoration for who God is.

A settled belief that God’s side is the winning one.

Playing in the Key of Praise

Our daughter has taken many music lessons. She has practiced with a reasonable degree of dedication. And she has made good and measurable progress in her skill.

And all the while she has saved: birthday checks, babysitting money. The amount of the required investment being considerable, two grandmothers have willingly contributed. Mom and Dad dug deep.

The appointed day arrives to make the wintry pilgrimage from Berrien Center, Michigan, to Ogden Avenue in Chicago. When we arrive, we find the exterior of the building understated at best: industrial, an urban backstreet.

Then we travel by freight elevator up a couple floors and are led into a gorgeous room with large picture windows opening on the Chicago skyline. That room is filled with tight rows of large, beautiful instruments. The Lyon and Healy showroom is full of harps, beautiful harps, scores of them. And one of them is to be ours, hers.

I pulled out the receipt this week. It is dated January 8, 2006. I’m still impressed by the amount of money it takes to purchase a quality harp. After careful shopping, and a lot of questions to the saleswoman, we buy a used harp bearing the serial number 51325.

The logo in the background of the receipt is a stylized “L,” a curly ampersand, and an artistic “H,” accompanied by this slogan: “Harpmakers to the world since 1889.”

Somewhere in the heavenly courts a showroom opens onto the skyline of the New Jerusalem. Its paperwork bears the motto “Harpmakers to the cosmos since time immemorial.”

This showroom, too, is filled with harps—handcrafted, hand-carved, gold-encrusted harps. Myriads of them, gleaming in that showroom. They are all tuned up and ready to play in the key of praise. They don’t have serial numbers, but artistically engraved into each harp is a name. And one of those names is yours.

John McVay is president of Walla Walla University. This article is based on his baccalaureate address at Andrews University April 30, 2016.