When Jacob learned to stop running. 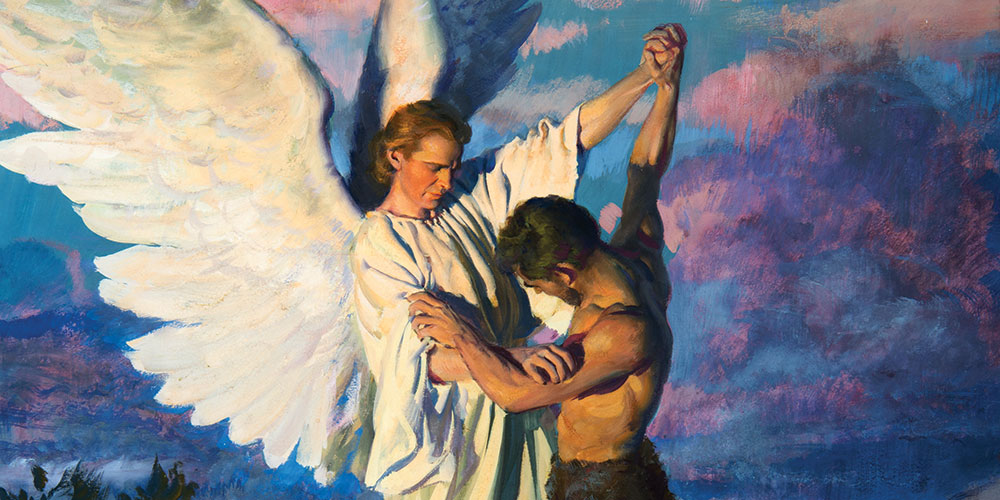 Jacob’s experience during that night of wrestling and anguish represents the trial through which the people of God must pass just before Christ’s second coming. The prophet Jeremiah, in holy vision looking down to this time, said, “We have heard a voice of trembling, of fear, and not of peace. . . . All faces are turned into paleness. Alas! for that day is great, so that none is like it: it is even the time of Jacob’s trouble; but he shall be saved out of it.” Jeremiah 30:5-7.

Satan had accused Jacob before the angels of God, claiming the right to destroy him because of his sin; he had moved upon Esau to march against him; and during the patriarch’s long night of wrestling, Satan endeavored to force upon him a sense of his guilt, in order to discourage him, and break his hold upon God.

When in his distress Jacob laid hold of the Angel, and made supplication with tears, the heavenly Messenger, in order to try his faith, also reminded him of his sin, and endeavored to escape from him.

But Jacob would not be turned away. He had learned that God is merciful, and he cast himself upon His mercy. He pointed back to his repentance for his sin, and pleaded for deliverance. As he reviewed his life, he was driven almost to despair; but he held fast the Angel, and with earnest, agonizing cries urged his petition until he prevailed.

The Wideness of His Mercy

Such will be the experience of God’s people in their final struggle with the powers of evil. God will test their faith, their perseverance, their confidence in His power to deliver them. Satan will endeavor to terrify them with the thought that their cases are hopeless; that their sins have been too great to receive pardon. They will have a deep sense of their shortcomings, and as they review their lives their hopes will sink.

Jacob’s history is an assurance that God will not cast off those who have been betrayed into sin.

But remembering the greatness of God’s mercy, and their own sincere repentance, they will plead His promises made through Christ to helpless, repenting sinners. Their faith will not fail because their prayers are not immediately answered. They will lay hold of the strength of God, as Jacob laid hold of the Angel, and the language of their souls will be, “I will not let Thee go, except Thou bless me.”

Had not Jacob previously repented of his sin in obtaining the birthright by fraud, God could not have heard his prayer and mercifully preserved his life. So in the time of trouble, if the people of God had unconfessed sins to appear before them while tortured with fear and anguish, they would be overwhelmed; despair would cut off their faith, and they could not have confidence to plead with God for deliverance.

But while they have a deep sense of their unworthiness, they will have no concealed wrongs to reveal. Their sins will have been blotted out by the atoning blood of Christ, and they cannot bring them to remembrance.

Satan leads many to believe that God will overlook their unfaithfulness in the minor affairs of life; but the Lord shows in His dealing with Jacob that He can in no wise sanction or tolerate evil. All who endeavor to excuse or conceal their sins, and permit them to remain upon the books of heaven, unconfessed and unforgiven, will be overcome by Satan. The more exalted their profession, and the more honorable the position which they hold, the more grievous is their course in the sight of God, and the more certain the triumph of the great adversary.

Yet Jacob’s history is an assurance that God will not cast off those who have been betrayed into sin, but who have returned unto Him with true repentance. It was by self-surrender and confiding faith that Jacob gained what he had failed to gain by conflict in his own strength. God thus taught His servant that divine power and grace alone could give him the blessing he craved.

Thus it will be with those who live in the last days. As dangers surround them, and despair seizes upon the soul, they must depend solely upon the merits of the atonement. We can do nothing of ourselves. In all our helpless unworthiness we must trust in the merits of the crucified and risen Saviour. None will ever perish while they do this. The long, black catalogue of our delinquencies is before the eye of the Infinite. The register is complete; none of our offenses are forgotten. But He who listened to the cries of His servants of old will hear the prayer of faith and pardon our transgressions. He has promised, and He will fulfill His word.