After the shepherds heard the angels sing, nothing was ever the same. 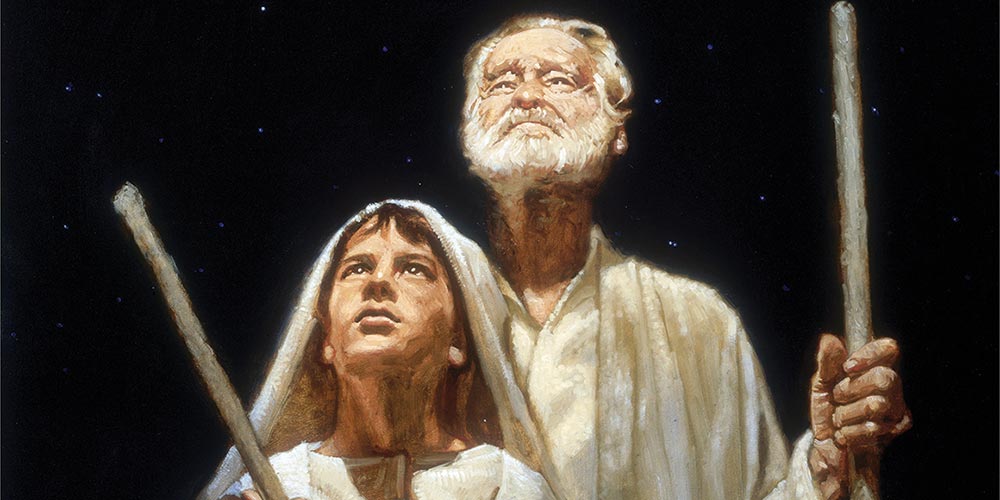 In the fields where the boy David had led his flock, shepherds were still keeping watch by night. Through the silent hours they talked together of the promised Savior, and prayed for the coming of the King to David’s throne. “And, lo, the angel of the Lord came upon them, and the glory of the Lord shone round about them: and they were sore afraid. And the angel said unto them, Fear not: for, behold, I bring you good tidings of great joy, which shall be to all people. For unto you is born this day in the city of David a Saviour, which is Christ the Lord.”

A Joyful Song Made Known

At these words, visions of glory fill the minds of the listening shepherds. The Deliverer has come to Israel! Power, exaltation, triumph, are associated with His coming. But the angel must prepare them to recognize their Savior in poverty and humiliation. “This shall be a sign unto you,” he says; “Ye shall find the babe wrapped in swaddling clothes, lying in a manger.”

The heavenly messenger had quieted their fears. He had told them how to find Jesus. With tender regard for their human weakness, he had given them time to become accustomed to the divine radiance. Then the joy and glory could no longer be hidden. The whole plain was lighted up with the bright shining of the hosts of God. Earth was hushed, and heaven stooped to listen to the song—

“Glory to God
in the highest,
And on earth peace,
good will toward men.”

Oh that today the human family could recognize that song! The declaration then made, the note then struck, will swell to the close of time, and resound to the ends of the earth. When the Sun of Righteousness shall arise, with healing in His wings, that song will be re-echoed by the voice of a great multitude, as the voice of many waters, saying, “Alleluia: for the Lord God omnipotent reigneth.” Rev. 19:6.

As the angels disappeared, the light faded away, and the shadows of night once more fell on the hills of Bethlehem. But the brightest picture ever beheld by human eyes remained in the memory of the shepherds. “And it came to pass, as the angels were gone away from them into heaven, the shepherds said one to another, Let us now go even unto Bethlehem, and see this thing which is come to pass, which the Lord hath made known unto us. And they came with haste, and found Mary, and Joseph, and the babe lying in a manger.”

Departing with great joy, they made known the things they had seen and heard. “And all they that heard it wondered at those things which were told them by the shepherds. But Mary kept all these things, and pondered them in her heart. And the shepherds returned, glorifying and praising God.”

Heaven and earth are no wider apart today than when shepherds listened to the angels’ song. Humanity is still as much the object of heaven’s solicitude as when common men of common occupations met angels at noonday, and talked with the heavenly messengers in the vineyards and the fields. To us in the common walks of life, heaven may be very near. Angels from the courts above will attend the steps of those who come and go at God’s command.

The story of Bethlehem is an exhaustless theme. In it is hidden “the depth of the riches both of the wisdom and knowledge of God.” Rom. 11:33. We marvel at the Savior’s sacrifice in exchanging the throne of heaven for the manger, and the companionship of adoring angels for the beasts of the stall. Human pride and self-sufficiency stand rebuked in His presence.

Yet this was but the beginning of His wonderful condescension. It would have been an almost infinite humiliation for the Son of God to take man’s nature, even when Adam stood in his innocence in Eden. But Jesus accepted humanity when the race had been weakened by four thousand years of sin. Like every child of Adam He accepted the results of the working of the great law of heredity. What these results were is shown in the history of His earthly ancestors. He came with such a heredity to share our sorrows and temptations, and to give us the example of a sinless life.

Satan in heaven had hated Christ for His position in the courts of God. He hated Him the more when he himself was dethroned. He hated Him who pledged Himself to redeem a race of sinners. Yet into the world where Satan claimed dominion God permitted His Son to come, a helpless babe, subject to the weakness of humanity. He permitted Him to meet life’s peril in common with every human soul, to fight the battle as every child of humanity must fight it, at the risk of failure and eternal loss.

The heart of the human father yearns over his son. He looks into the face of his little child, and trembles at the thought of life’s peril. He longs to shield his dear one from Satan’s power, to hold him back from temptation and conflict. To meet a bitterer conflict and a more fearful risk, God gave His only-begotten Son, that the path of life might be made sure for our little ones. “Herein is love.” Wonder, O heavens! and be astonished, O earth!