We may see it every day and not notice it. 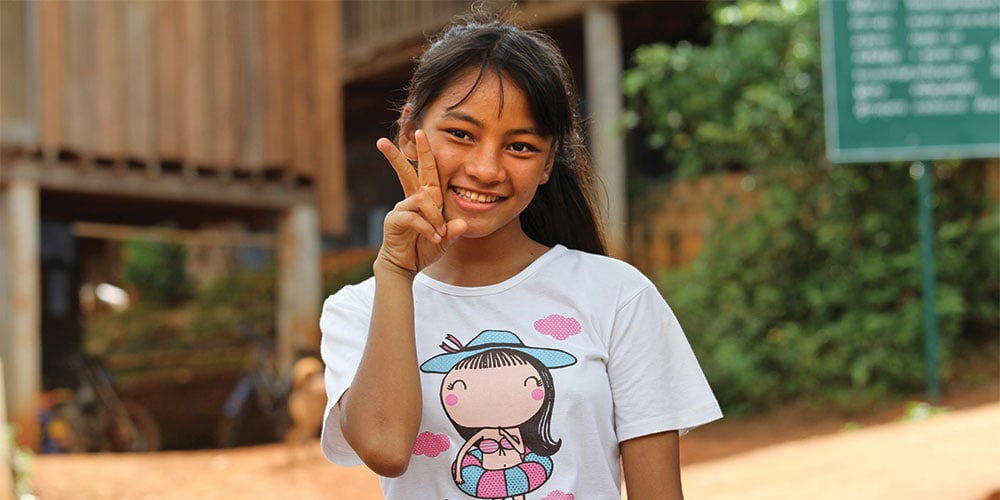 Tucked away down a country road in the heart of the Chiang Rai province in Thailand, you’ll find the Keep Girls Safe shelter. The shelter, run by Adventist Development and Relief Agency (ADRA), houses about 30 girls who would otherwise be targets for human trafficking.

Pim is 14 years old. She came to Keep Girls Safe seven years ago when it became apparent that without intervention, she would likely follow a path that is all too well known for young girls in this area. Like her stepsisters before her, Pim was destined for prostitution.

Human trafficking is becoming much more commonplace in societal conversation, but the subject still has many complicated levels to it. The reported number of those being trafficked for commercial sex or forced labor is nearly 21 million, but that number is actually believed to be much higher. While violence, threats, and kidnappings occur, some victims don’t even realize that they are victims, often being coerced to believe they are simply working off debts owed to their captors.

For Pim and others like her, the “choice” was made for them by the very people who should have been caring for their safety.

Pim’s family home is in a village not far from the Keep Girls Safe shelter, and it’s clear their house is one of the nicest in the community. Pim’s mother left the family when she was still very little, leaving her with a father addicted to drugs and alcohol. But for as much money as Pim’s father has thrown away on his addictions, he has earned more through his stepdaughters. The two young women moved to Bangkok years ago and chose to join the sex industry, which means that they are free to send money back home. Those approaching Pim’s father about taking his youngest daughter for the same purpose promised him more income from her work, but that is never true.

Seventh-day Adventists are uniquely qualified to respond to those in need with strength and compassion. After all, we’ve been given the keys from God Himself and tasked to take them to the world. If nothing else, we know the power of prayer to deliver even the weakest victims from the harshest circumstances. But like many things, prayer combined with action is required.

In terms of trafficking, the most effective time to save a vulnerable person is before they become a victim, so that’s where ADRA’s intervention begins. It’s not enough to pluck girls like Pim from their homes and protect them. Therefore, ADRA Thailand goes into communities to spread awareness about human trafficking, teaching groups about child rights, the value of education, and how to recognize the risks associated with trafficking. From there, it goes peer to peer—children teach their classmates, their siblings, their family, etc. And from there the knowledge spreads to help others.

Pim is safe for now in the Keep Girls Safe shelter. She can visit her father only with shelter staff. Unfortunately, he can request her return at any time, which is a terrifying prospect given that he is still intent on sending her to Bangkok if she comes home. But he is not interested in that now. With her at Keep Girls Safe, there is one less mouth to feed and one less thing for him to worry about.

Like most girls at Keep Girls Safe, Pim was slow to warm up to being away from her home. But now the girls she lives and learns with are a second family. They share chores and take turns cooking meals while receiving an education and valuable training that will help them be successful when they are older. In a place like this, the girls can just be kids sharing endless giggles, silly card games, music, and hugs all around. These glimpses of hope show the heart and joy that this shelter provides to these vulnerable girls.

Ending human trafficking is a complicated endeavor because it’s big business, earning criminals up to $150 billion every year, making it the third most profitable criminal activity in the world. The illegal trades of running drugs and guns are the only activities that bring in more money than trafficking human beings. Thus those making a profit from this evil industry look for every opportunity to expand their operations. Reports of human trafficking trend upward during major disasters and humanitarian crises when families are broken apart, women and children are isolated, and desperate people are vulnerable to exploitation. When ADRA teams were responding to the refugee crisis across Europe in recent years, a vital part of their work was counseling displaced people on how to avoid traffickers who prey on those in crisis.

Pim’s story, along with reports in the media, put a spotlight on Thailand and other countries that are commonly connected to this practice. But human trafficking has gained a foothold in our own backyards here in North America. Polaris, an organization based in Washington, D.C., says that while official estimates are not available for the United States, the number of victims would easily reach into the hundreds of thousands. It’s estimated that one in every six runaways that are reported to the National Center for Missing and Exploited Children are likely victims of child sex trafficking.

Even in the face of these overwhelming statistics, there is still hope. As we are made more aware of how far and wide human trafficking reaches, there are more eyes on this issue globally than ever before. As a faith-based movement, we can respond. There is so much that we can each do, and it begins with education and awareness. Our own church communities need to be able to recognize the signs of trafficking in our own areas and reach out to law enforcement if needed.

There are also relatively simple ways to harness technology to fight trafficking. For example, frequent travelers can upload photos of their hotel rooms to an app called TrafficCam that uses the pictures to scan and match images that are shared of victims online and in ads. And similar to the Keep Girls Safe shelter in Thailand, there are organizations providing shelter, training, and resources to women who have been rescued from trafficking right here in the United States. It is certainly worth the effort to find ways to contribute your time and/or financial resources to be of assistance.

We are called to look out for the “least of these” in our communities around the world, especially for the vulnerable and those in crisis. There is no better time than now to act on the gospel by doing exactly that.

WHAT YOU CAN DO