It’s easier to believe in a loving heavenly Father when someone is there with a hug. 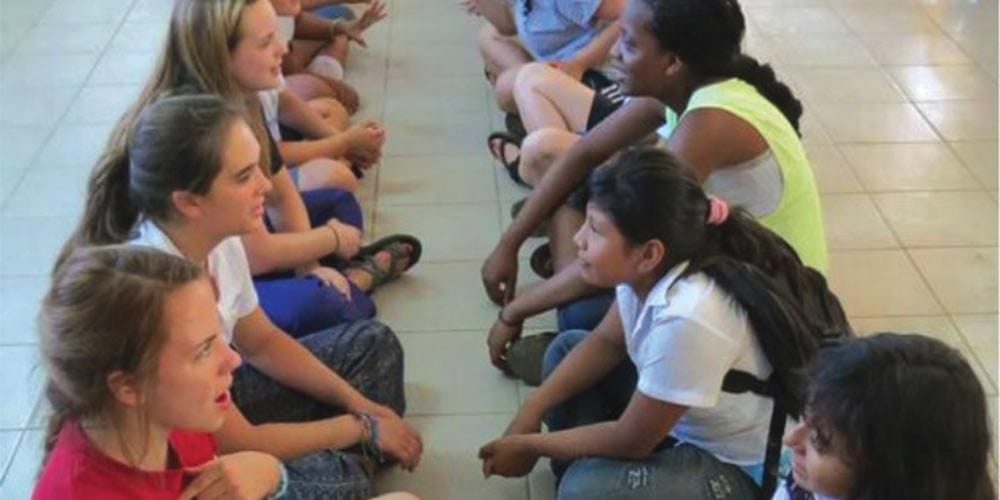 As I walked into the courtyard, they looked at me with shy eyes. I offered a slight smile.

Oh, no. Should I not have smiled? Was that inappropriate? After what they have been through, they probably don’t want to smile, much less have someone smile really big at them as if nothing had happened. I don’t even know these girls yet, only the terrible thing they have experienced.

Casa Hogar is a home and place of refuge for sexually abused girls in Nicaragua. At this place girls have a safe haven to live, get treatment for emotional recovery, learn about God, and be with other girls who can relate to what they had been through. The girls are allowed to stay as long as they need, and leave only when they feel ready to go out and face the world.

Surrounded by a big fence for safety, the home is one long, narrow building that twists around the little property and is painted many bright and happy colors. There’s a room for the girls to have worship, a room for them to eat in, a kitchen, classrooms for those who did not attend school outside of the home, and several bedrooms. The plot of land is filled with mango trees, a garden, and beautiful flowers.

The home houses girls aged 7 through 19. All of them have been sexually abused.

As soon as they were introduced to our mission team, many little girls ran up and greeted us with hugs and smiles. Others were extra-quiet, standing behind the little girls trying to force a smile.

My heart broke as I met each girl, realizing that many of them were the same age as my little sister, Summer, imagining what it would be like if the same thing had happened to her.

How could a man do that to such a young, innocent girl? How could someone be so evil? The questions raced through my head.

After a day of getting to know the girls, our youth group boarded a bus and headed back to the campus we were staying at. A lump formed in my throat when our youth pastor informed us that some of the girls had been abused by their very own fathers!

Why would a father do that to his own daughter? Why? Why?

Two Arms Wrapped Around Me

Two days later our group returned to Casa Hogar.We played a game to get to know each other, learning each other’s names, favorite colors, and ages. I didn’t speak Spanish very well, but we had fun trying to speak little bits of each other’s language.

After the game, we gathered in a circle and sang songs. With our youth pastor translating, I shared about a time I was far from the Lord, how I came back to Him, and how much peace He has given me. I saw several pairs of watery eyes around the room.

I ended my short talk with the story in Mark 4 about Jesus calming the storm. I told the girls that just as Jesus did in my life, He could “calm the storms” and be in control of their lives if they asked Him.

“Sure, the storm may not go away completely, as it did in this story,” I pointed out. “But it will be under the control of the Mighty One. Just trust Him and have faith that He will get you through it.”

After I shared my story, we all headed outside. As I walked toward the basketball court, I felt two arms wrap around me from behind. Turning around, I saw a quiet girl who had teared up during my story.

Facing the girl, I smiled at her. She smiled back. I hugged her. She hugged me, and didn’t let go.

We stood there for several minutes. No words, just two connecting hearts. Now I was the one tearing up. She just wants to be loved.

We sat by a group of girls drawing chalk pictures on the pavement. I grabbed two pieces of chalk and handed one to her.

Instead of answering, she picked up her piece of chalk and began writing on the pavement: J-e-s-m-i.

“What you name?” Jesmi offered in her best English.

“Morgan!” she exclaimed in her Hispanic accent.

She hugged me again and went back to drawing on the pavement.

She smiled. I reached over and gave her a hug.

Jesmi and I drew more pictures trying to learn what we could about each other. Then we hit a volleyball around, threw a Frisbee, and played tag with the other girls. It was cool to see how much joy a game of tag brought to these girls.

We visited Casa Hogar one more time. Jesmi sat next to me as we all sang and shared stories.

A girl from our group told about her father leaving her and her mom. She explained how difficult it was to grow up without a father, and how she had had so much hate for the man for many years, but had found comfort knowing that a heavenly Father loves and treasures her.

Jesmi placed her head in my lap. I stroked her hair and prayed for her. Even though she couldn’t understand me, I know she could feel God’s presence.

Then Jesmi sat up, her face moistened. Our eyes filled with tears.

I called Pastor Will and asked him to translate for me.

“I am so glad I’ve met you,” I told her. “You are a beautiful girl, and you will go far in life. I don’t know what all you’ve been through, but I do know this: You are loved, not only by me but by a King. He created you, and He loves you. Anytime you’re scared, or lonely, or just want to someone to talk to, call out to Him. Christ died just for you because He loves you that much. You are worthy, you are loved, you are special, and you are beautiful.” Jesmi’s face began to glow.

This young girl had felt so much pain from her own father. It was amazing to be able to tell her about a Father in heaven who loved her.

I prayed with Jesmi, and we both cried in each other’s arms before we had to part. It was the hardest goodbye I’ve ever had to say. But I’ll see Jesmi again this spring when I return to Nicaragua.

Morgan Nash is a student at Collegedale Academy near Chattanooga, Tennessee. She blogs at sunflowerserendipity.wordpress.com.