How can we celebrate with so much suffering? How can we not? 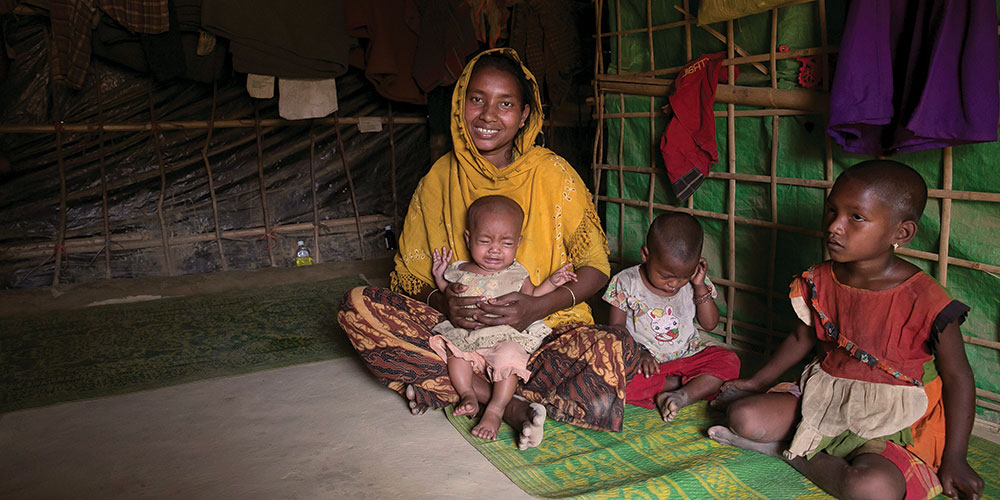 It’s a story we hear so often (once a year at Christmas, albeit several times during the season), that all we imagine is a baby in a manger, properly lit, with characters provided by Central Casting: proud parents, generous Wise Men, humble shepherds, and animals procured from a local petting zoo.

And no matter how often we’re reminded of the danger, the unhygienic atmosphere, the putrid aromas of such a setting, we tend to romanticize the scene with fluffy sheep, bright stars, and angel choirs.

The reality of that extraordinary moment in earth’s history was anything but romantic. After all, when did anyone think of a government mandate as being romantic? “In those days Caesar Augustus issued a decree that a census should be taken of the entire Roman world. . . . And everyone went to their own town to register” (Luke 2:1-3).

Let’s be clear: Joseph and Mary weren’t on some romantic, prefamily holiday when Jesus was born. They were on their way to register, along with countless other travelers. No wonder there was no room at the inn; Bethlehem was already packed with people doing their civic duty. Joseph and Mary were lucky to find shelter in a stable. Had they arrived a little later, they might have ended up having their baby in a field, perhaps under a tree.

And just as every good story has a villain, in this story that role is played by Herod the Great. He heard that strangers from the east had come searching for a king. “When Herod heard this he was disturbed” (Matt. 2:3). Herod was likely “disturbed” before the arrival of the travelers; however, he demonstrated his caprice, violence, and insecurity when he “gave orders to kill all the boys in Bethlehem and its vicinity who were two years old and under” (verse 16).

So now we have the very unromantic notion of a young family—mother, father, and baby—having to flee for their lives, and becoming refugees in the process.

With so much in the news about refugees recently, how many of us see anything romantic about a young couple having to take a dangerous journey with only the clothes on their backs and whatever they could carry? What would they do once they got to their destination? Could they depend on the kindness of strangers? How long would it take for them to get settled?

These and many other questions remain unanswered. But knowing human nature, we can say with certainty that the time Mary, Joseph, and Jesus spent in Egypt was not some carefree cross-cultural experience. If current situations are any indication, they must, at one time or another, have experienced hunger, isolation, insecurity, and discrimination.

As Real as it Gets

With that context, it’s not hard to imagine how similar are the stories we hear today about the plights of immigrants and refugees.

Their stories are often told on network and cable radio and television broadcasts: how today’s refugees have to flee repressive and violent dictators; how religious and political persecution forces them to leave everything they’ve known with only what they can wear and carry; how often children are born on their journeys in some field or ruined building; how some refugees arrive at their destination with one, two, or all their family members dead or missing.

If Jesus came to fill darkness with light, shouldn’t we also make life brighter for those around us?

The Bible is universally appreciated because it accurately reflects the human experience in almost any age, in almost every particular.

Read this way, we can never read the story about the Baby born in a manger as something sterile and romantic. There’s a hard edge to the story of Bethlehem, the reality of which we still live today.

The story of Christ’s birth is actually a testament to God’s bravery in providing His only Son as the means by which He brought light to this dark world. Jesus arrived as a defenseless Baby, homeless, and for several months (years?) a refugee.

But we celebrate the season with lights, gifts, and feasting, because Jesus brings light, grace, and spiritual nourishment.

We can’t help celebrating. Instead of darkness, we have light; instead of death, life; instead of poverty, riches that are eternal; instead of no place to call home, we have a place prepared for us.

The fact remains, however, that for all the holiday pageants, carols, choirs, gifts, and lights, the world is still a dark place. Maybe not where we live, but in far too many places in the world more people go to bed hungry than go to bed full. In many parts of the world, clean, healthy, drinkable water is rare, and often hard to obtain. In far too many parts of the world people fall asleep to the sound of explosions and gunfire (even in the United States).

So should we celebrate Jesus’ birth even though countless millions suffer from hunger, sickness, violence, and human disasters? By all means!

As we celebrate Christ’s birth, we’re honoring the One who left glory so He could inhabit this world with all its violence, poverty, disease, and social and economic inequities. We’re saying that this world will not always be as it is. We’re taking seriously Jesus’ promise: “I will come back and take you to be with me that you also may be where I am” (John 14:3).

If Jesus came to fill darkness with light, shouldn’t we also use the blessings we enjoy to make life brighter for those around us? Can we do nothing in the presence of so much suffering?

A young couple travels to a city far from home in hopes of finding better living conditions for themselves and their unborn child. On their way to find shelter they are robbed, their cash and credit cards stolen.

Now alone in a strange city, they have to find shelter that costs nothing. As the two scrounge alleyways and dumpsters for something they can use to stay warm through the night, a minivan cruises suspiciously nearby. The van’s passenger window rolls down and someone shines a flashlight in the couple’s faces.

“Do you have someplace to spend the night?” asks someone in their native language.

Clutching their few belongings closer to their bodies, they shake their heads no.

The van’s side door slides open and two people exit. Holding coats, blankets, and warm drinks they say, “We know where you can spend the night. Tomorrow we’ll help you get settled.”

Or how about this: A public elementary school in an impoverished community serves breakfast and lunch to its students when school is in session. But during the pandemic food is available only on school days. But on weekends and on the first day of Christmas break, two cars pull into the school’s parking lot. The six people who get out unload folding tables and boxes of food, which they begin serving as neighborhood kids show up. This continues every day until Christmas.

On Christmas Day the school’s multipurpose room has been commandeered (with the school district’s permission), decorated with Christmas lights, and tables and chairs set up. A few minutes before noon, people start entering the room, wearing masks, practicing social distancing, carrying plates, bowls, and pots full of food from their native countries: from Africa, Asia, Latin America, and Europe. Notices have been handed out throughout the community before Christmas, so that everyone—rich or poor, young or old, native or immigrant—could share a warm meal and enjoy socially-distant fellowship.

Whenever school begins again, families and individuals who formed relationships over Christmas dinner will continue me
eting once a month to make sure that no one in their community goes hungry or friendless.

These two scenarios, although fictitious, represent countless individuals and communities where real needs are met by real people who reflect Christian compassion, even when it isn’t Christmas.

Celebrating the true spirit of Christmas does not mean forsaking the lights, carols, gifts, and pageants of the season in favor of focusing on the suffering, violence, and poverty that surround us. We celebrate the birth of a singular Baby so that we can see the world as He saw it. He said, “I am the light of the world” (John 8:12).

Jesus also told His followers, “You are the light of the world” (Matt. 5:14). Who would have known we’d have so much in common with a Baby born in a manger?

Stephen Chavez is an assistant editor of Adventist Review and Adventist World magazines.