Apparent Skepticism About the Imminence of the Second Advent

The data may surprise, astonish, amaze, and maybe even unnerve.

The graphics in these two pages represent data from two thoroughly unrelated sources. One is the General Conference of Seventh-day Adventists, through its unit of Archives, Statistics and Research [ASTR]; the other is the Pew Research Center.  The data may surprise, astonish, amaze, and maybe even unnerve . Hopefully, more than anything else, it help to show where the Church is on some specific issue, where we can help each other to be, and how we may best distribute our resources and offer up our prayers.

Survey by Adventist Archives and Statistics:*

Question statement: I expect the world to end within the next 20 years. Second Coming in my lifetime (56,280 respondents):

The South Pacific Division has the highest percentage of members who strongly agree with this statement.

The Euro-Asia, Trans-European, and North American Divisions have the highest percentage of members who are unsure about whether Jesus will come in their lifetime.

3% I have major doubts about them.

9% I have some questions about them.

21% I accept it because the church teaches them.

66% I embrace them wholeheartedly.

Except for the Southern Asia Division (38 percent), most respondents in all divisions wholeheartedly accept end-time prophecies and more than 80 percent in all divisions agree on the soon Second Coming. 1% I have major doubts about it.

4% I have some questions about it.

22% I accept it because the church teaches it.

71% I embrace it wholeheartedly.

The Inter-American Division has the highest percentage of members who embrace it wholeheartedly.

The Northern Asia-Pacific Division has the highest percentage of members who are unsure.

The Southern Asia-Pacific Division has the highest number of members who don’t accept it.

The Pew Research Center did a similar poll among 2,003 American adults. Of the respondents, 1,670 identified as Christian.*

Do you believe in the second coming of Christ? 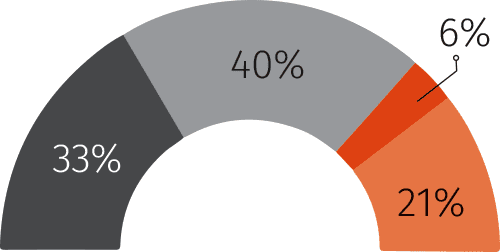 Is the time of the Second Coming revealed in biblical prophecies?

Before the Second Coming, the world situation will . . . Do you believe that Jesus will return to earth in your lifetime?