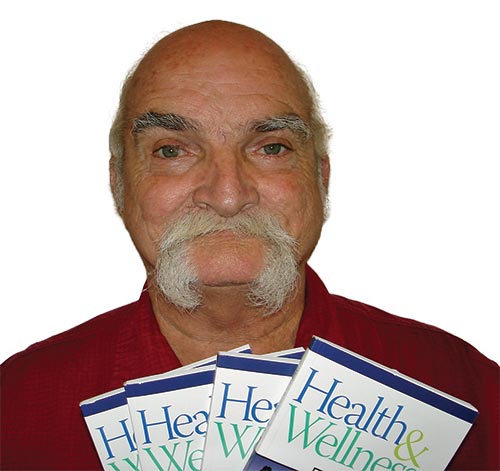 The physician called Robert Davis into his office at a veterans hospital in Dallas, Texas.

Robert, a former sailor, had arrived for his usual appointment, but this time it was different. The doctor asked if he was a Seventh-day Adventist.

“I’m trying to be,” Robert replied with a smile.

The next question was whether Robert had been placing copies of the Adventist book Health and Wellness: Secrets That Will Change Your Life around the hospital.

Robert nodded. He had recently begun leaving copies of Health and Wellness in each of the hospital’s 14 clinics, in the library, and on hallway tables during his regular medical visits.

Robert noticed one of his books on the doctor’s desk.

The doctor then changed the topic. He told Robert that the U.S. government-run facility was starting a weekly three-hour class on wellness and invited him to attend.

When Robert returned the following week for the first class, an instructor stopped him in the hallway and announced that the curriculum had been changed. Instead of the previously prepared materials, the head physician had decided to base the seminars on Health and Wellness. Moreover, so many veterans had signed up that the hospital was offering two separate classes based on the book.

Robert’s face glowed as he reported the news to his Adventist church family in Hico, Texas, according my father, Robert L. McChesney, the church’s head elder.

Health and Wellness, the church’s missionary book for 2015, is wildly popular. The pocket-sized book is packed with practical tips by co-authors Peter N. Landless, a board-certified nuclear cardiologist and director of the Adventist world church’s Health Ministries department, and evangelist Mark A. Finley, who was recognized with his wife, Teenie, during the Annual Council business meeting in October for their decades-long efforts to promote healthy living.

Nearly 40 million copies of Health and Wellness have been distributed in more than 100 languages worldwide, according to Wilmar Hirle, associate director of the Adventist world church’s Publishing Ministries department.

Half a million copies have been distributed in North America in English, Spanish, and French.

“We are very excited about this!” Dale E. Galusha, president of Pacific Press, which publishes the book in North America, told me.

While Robert has shared about 300 books, provided by the Hico church, entire congregations have gotten involved elsewhere. At the urging of Luis Biazotto, community services director of the Greater New York Conference, some 1,000 church members from the five boroughs of New York City handed out 100,000 copies over two days in late September. Along with the books, participants gave food and water and offered massages and blood pressure screenings. The outreach effort was followed up with eight-week health seminars in English and Spanish.

The book is changing lives — including that of Robert in Texas. Robert shed 26 pounds (12 kilograms) by following the book’s suggestions during the hospital’s four-month class, which ended a few weeks ago. His wife, who attended with him, also left leaner and fitter.

Robert still takes the books to the hospital, but the influence of the work that he initiated has spread beyond Dallas. At least two other veterans hospitals in Texas have also begun teaching wellness classes with the book.

My father put it best. “God has provided us with excellent sharing materials that attract readers,” he said. “Let’s make use of them.”