The Night the Stars Fell 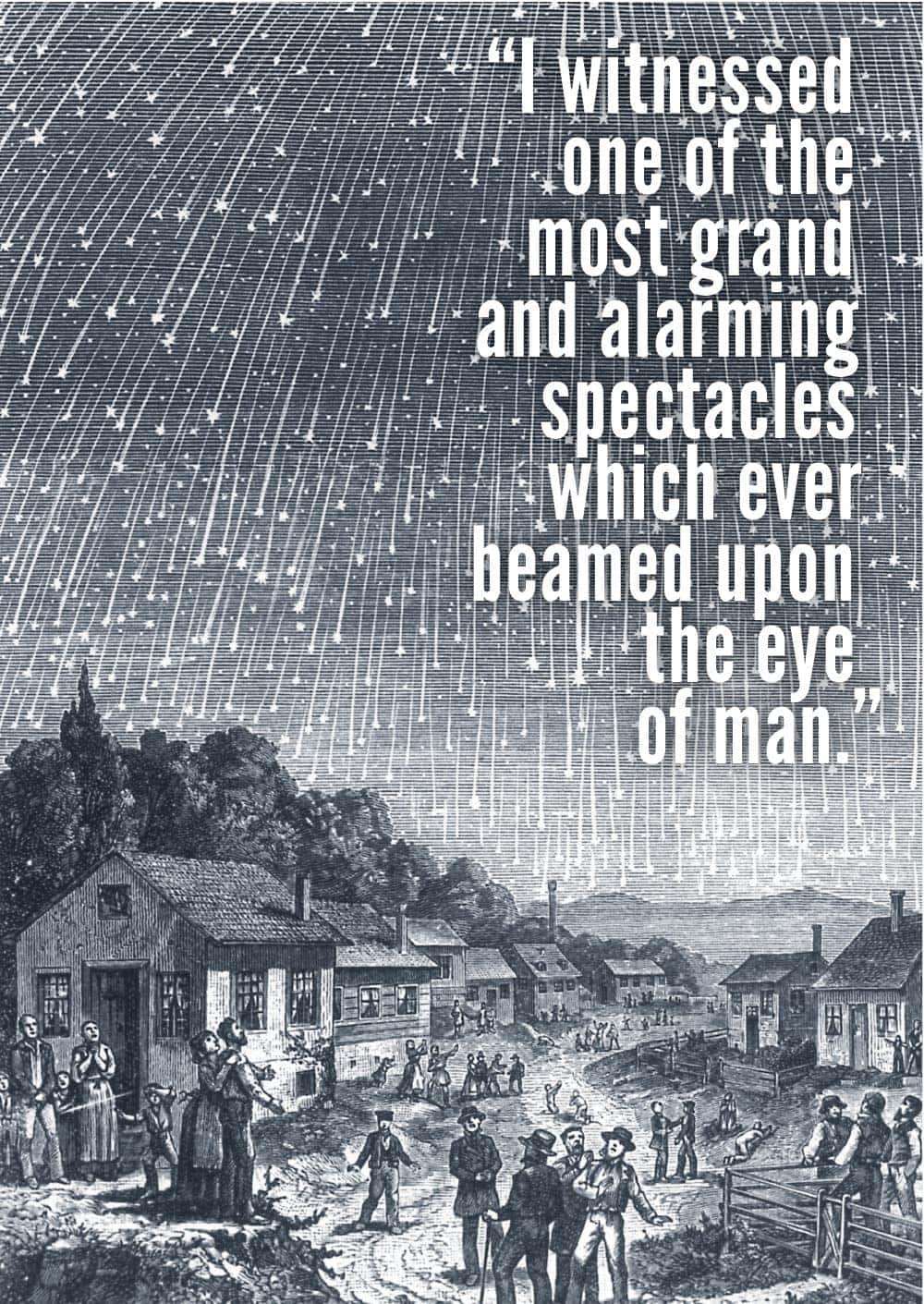 Burning meteors populated the heavens with thousands upon thousands of incandescent dots shortly after sunset on November 12, 1833. Through the small hours of the night and into the wee hours of the morning the glowing matter seemed to wait as if on cue, suspended on an onyx canvas. Several hours before the sun rose, the first star fell.

Then it was as if the heavens collapsed.

People who witnessed the astonishing display across North America spoke of it even decades later with eyes wide and a quiver in the voice. “It seemed as if the whole starry heavens had congregated at one point near the zenith, and were simultaneously shooting forth, with the velocity of lightning, to every part of the horizon, and yet they were not exhausted—thousands swiftly followed in the track of thousands, as if created for the occasion,” testified one onlooker.1

Then it was as if the heavens collapsed.

“Never did rain fall much thicker than the meteors fell toward the earth; east, west, north, and south, it was the same,” said another. “In a word, the whole heavens seemed in motion.”2

Significantly, Adventist Church cofounder Ellen G. White later said that the starry spectacle was “the last of the signs . . . which were promised by the Savior as tokens of His second advent.”3

But what does November 12-13, 1833, mean to us today? After all, we are almost 200 years away from the event, and we’re still waiting for Jesus to come. In addition, we have witnessed indications that we are living in the last days that threaten to overshadow the falling stars from long ago: Wars that have killed millions; diseases that have claimed even more; a hyperincrease of knowledge; moral depravity; unprecedented natural disasters; the gospel reaching every nation in the world but a few.

Still, 1833 can offer an important lesson if we listen to those who witnessed that night and rejoiced in the light of daybreak.

The dazzling light of the falling meteorites caused one witness to fear that a fire was raging near his home.

“Being up this morning, I witnessed one of the most grand and alarming spectacles which ever beamed upon the eye of man,” he later wrote. “The light in my room was so great that I could see the hour of the morning by my watch which hung over my mantel, and supposing there was a fire near at hand, probably on my own premises, I sprung to the window, and behold, the stars or some other bodies presenting a fiery appearance were descending in torrents as rapid and as numerous as I ever saw flakes of snow, or drops of rain, in the midst of a storm.”4

A Millerite grasped for words to describe the scene: “The dawn was a full hour, that morning, earlier than usual, and the whole eastern sky was transparent like molten glass, so as I never witnessed before nor since. An open arch of brilliant light arose from the east, above which arch stood the morning star, inexpressibly glorious for its brilliance and firmness on the face of the dark, transparent, and bursting firmament.”5

On the night the stars fell William Miller was a 51-year-old lecturer unwittingly starting a movement that gained steam until the Great Disappointment 11 years later, when the hopes of his followers that Jesus would return on October 22, 1844, were dashed.

James White had recently dropped out of school at the age of 12 to earn his keep on the family farm. His future wife, Ellen Harmon, was 5 going on 6, having started school that autumn in Portland, Maine.

The year 1833 found William Ellis Foy, an African-American teenager who would later receive visions that Ellen White and John Loughborough recognized as coming from God, soon to be baptized into Christ in southern Maine, not far from where the White and Harmon families lived.

Joseph and Prudy Bates were a middle-aged couple living in Fairhaven, Massachusetts, destined to accept the Millerite message a couple years later.

Whatever their age, wherever they were, these pioneers of the Seventh-day Adventist movement unanimously saw great significance in the celestial event of 1833, holding it to be a sign of the coming of Christ.

Ellen White noted that Jesus had promised the meteor shower, saying, “The stars will fall from heaven” (Matt. 24:29, NKJV),2 when His disciples asked for a sign that His coming was near. Furthermore, White said, the 1833 event fulfilled a prophecy by the apostle John in Revelation 6:13, where he wrote, “And the stars of heaven fell to the earth, as a fig tree drops its late figs when it is shaken by a mighty wind” (NKJV).

Adventist pioneer Joseph Harvey Waggoner was an early teen so impressed with the star shower that he later commissioned an engraving of the phenomenon that appeared in the 1889 Bible Readings for the Home Circle.

He wrote: “It was the privilege of the writer of these pages to behold this scene, and it was one never to be forgotten. They began to fall about an hour before midnight, increasing in frequency until, in a few hours, they became a perfect shower. They could no more be counted than one can count the fast-falling flakes of snow in a hard storm. They continued to fall without any diminution of numbers until the dawn of day obscured them. And when the approaching light of the sun paled them in the east, they still colored the western sky. And when the spreading light obscured them in every direction, occasionally one of great brilliancy would leave its trace in the west, showing that they were still falling.”6

One of the most meaningful accounts came from a non-Adventist, Frederick Douglass, who at the time was a 15-year-old slave in Talbot County, Maryland. Here was his reaction:

“I witnessed this gorgeous spectacle, and was awestruck. The air seemed filled with bright descending messengers from the sky. It was about daybreak when I saw this sublime scene. I was not without the suggestion, at that moment, that it might be the harbinger of the coming of the Son of Man; and in my then state of mind I was prepared to hail Him as my friend and deliverer. I had read that the ‘stars shall fall from heaven,’ and they were now falling. I was suffering very much in my mind. . . . I was looking away to heaven for the rest denied me on earth.”7

Later Douglass would obtain his freedom and become one of the greatest abolitionists and orators in American history. It is believed that he was acquainted with James and Ellen White when they lived in Rochester, New York, in the late 1840s. His oldest child, Rosetta Douglass-Sprague (1839-1906), became a Seventh-day Adventist.

With his prized literacy Douglass had read the words of Jesus, “The stars will fall from heaven.” He looked forward to the coming of Jesus, “my friend and deliverer,” not only because of the faith he had in Him, but because of the direness of his earthly situation. Douglass was a believer, off the radar of everyone who mattered, but known to God.

This speaks strongly to us today. God has believers in the
least likely places and situations, and they see the signs of end-times taking place in this world. Utterly tired of the turmoil, they look fervently to the sky for the return of their Friend and Deliverer.

We may not know these precious souls, but they will soon unite with the true and faithful among us. When they hear the truths about Jesus that it is our privilege to share, they will rejoice and walk in the truth.

These silent believers are everywhere, even in countries and places where the gospel has not been preached. They are as precious to God as the most faithful Christian in a Bible Belt state in the United States. Finding the water of life in places where others see only barren desert, these believers have a faith that may lack sophistication but is filled with simple love and trust.

They testify to a Lord who sheds His light everywhere and gives signs that seekers will notice.

It’s “about daybreak” for them.

Benjamin J. Baker is an assistant archivist at the General Conference of Seventh-day Adventists.