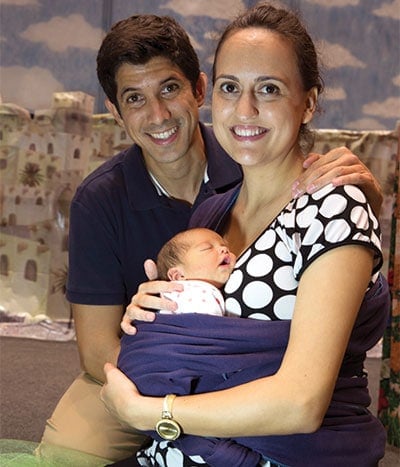 Claudio and Elizabeth Japas, a missionary couple posted in Central Asia, were not like many at the General Conference (GC) Session in San Antonio, Texas. Yes, they enjoyed their time seeing relatives and friends. And they brought their child with them. But they stood apart.

Sleeping in a denim-blue bundle on her mother’s chest was their four-day-old daughter, at her first GC Session.

The Japas are themselves GC Session "babies." Their story together starts in 2005, at the St. Louis, Missouri, GC Session.

“I was friends with Claudio’s sister,” explained Elizabeth. “And she had been telling me she had a brother. But I was busy with other things,” she added with a laugh.

But then, in St. Louis, Elizabeth was there with her family, and so was Claudio. They met and started a friendship. That friendship grew stronger and, a few months later, Claudio went to Loma Linda, where Elizabeth was already studying, to start his doctorate. Elizabeth, a nurse practioner, finished her master’s degree; Claudio completed his doctorate in public health, with a specialty in public care. They got married.

“Right before the GC Session in 2010,” Elizabeth added.

“Our plan,” explained Claudio, “was to get married, go on a honeymoon, and go to GC.” A missed flight, and they were unable to make the Atlanta Session.

Claudio and Elizabeth were determined to attend in 2015, planning to use their annual leave to travel to Texas for this year’s Session. For them, it would be a trip home.

Claudio, 36, was born in Puerto Rico to Argentinian parents. Elizabeth, 32, born in Bolivia, moved to the United States at the age of 16.

They have been the directors of centers of influence in the Southern Union Mission of the Euro-Asia Division since October 2013. While this is their first mission post, they are no strangers to the work. It is, for both, a “family thing.”

Elizabeth described her parents, José Luis Santa Cruz and Elizabeth Santa Cruz, as “amazing. I grew up in Bolivia and Peru. . . . In 2003 my parents went to Africa and have been there since. My father is a pastor; they are mission-minded and great examples.” The Santa Cruz’s are working in Burundi, although they were evacuated in May 2015 and are currently waiting to see when they will receive clearance to return.

Claudio’s family has been in ministry for several generations. “My parents were involved in lots of short-term mission trips when I was a teenager in the mid-1990s,” he said. At least once a year the Japases would go on trips, doing medical work and a lot of Maranatha Volunteers International projects, to the point where Claudio started leading young-adult projects.

“Both my grandfathers were pastors; on my father’s side it was Salim Japas, a pastor/evangelist in the Inter-American Division, and on my mother’s side, Arthur (Arturo) Utz was a pastor in Argentina for many years and then in California,” Claudio added.

Their plans to travel together from the mission field to the Session changed, however, when medical issues forced 24-weeks pregnant Elizabeth back to the Dallas-Fort Worth area in Texas, where Claudio’s parents live, in late February 2015. This separated the couple until Claudio could join her several months later.

Before giving birth, Elizabeth was one of the volunteers at the San Antonio health clinic conducted at the Alamodome about two months before the GC Session (link to health clinic article: http://ow.ly/PsZZo).

Elizabeth, with Claudio finally by her side and family near, went into labor on July 5 and, after what she described as a difficult labor, gave birth to baby girl Giselle Elizabeth on July 6. “After a very long day in labor, I was pushing and my mom had the tablet showing me the East-Central Africa Division report, and there’s my dad [on the screen], and I would look, then keep laboring. . . . It was incredible.”

Looking down at the bundle, both Claudio and Elizabeth smiled. They are thinking of nicknaming their daughter “GC.”

But why were they at the GC Session, with their newborn?

“This is our family!” exclaimed Elizabeth

“To be with our family. To taste heaven,” said Claudio. “Every time Elizabeth sees the Adventist logo she says, ‘There’s home. There’s my family.’”

Elizabeth, voice thick with emotion, agreed. “I don’t have the concept of home, of a place. We moved so much growing up . . . Home is not a place, home is here. Home is people.”