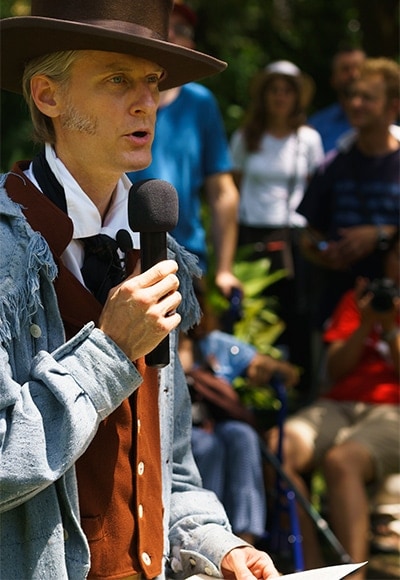 A direct descendant of the “King of the Wild Frontier” took a stand for the King of the universe at the Alamo.

Ryan McCoy, the great-great-great-great-great-grandson of American folk hero Davy Crockett, came to the General Conference session to participate in a historical re-enactment at the Alamo, the frontier mission where his well-known ancestor was slain in 1836, and to operate a booth for his Adventist media ministry in the session’s convention center.

McCoy, 41, a third-generation Seventh-day Adventist, read a portion of the United States (U.S.) Declaration of Independence at the Alamo last Sabbath, July 4, as a crowd including his wife, Kelly, and 7-year-old daughter looked on.

“It is not only a great honor to participate in this event, but at this critical point in history, any time we can read about our Creator, we should take the opportunity,” McCoy told the
Adventist Review.

The Declaration of Independence includes the statement, “All Men are created equal, that they are endowed by their Creator with certain unalienable Rights, that among these are Life, Liberty, and the Pursuit of Happiness.”

“It’s meaningful being the fifth great-grandson and being on this site, and being at one of the most important sites representing independence and freedom and fighting against oppression and tyranny,” McCoy said in the interview at the Alamo.

He drifted out of the Adventist Church in his 20s. He celebrated his 30th birthday alone in a Michigan forest, finishing the book
The Desire of Ages by Adventist Church cofounder Ellen G. White. As he closed the book, he felt that the Lord spoke to him.

“He said, ‘Ryan, it’s your 30th birthday; my Son started His ministry on His 30th birthday. What are you doing for Me?’ ” McCoy said.

McCoy said he felt troubled and inadequate for the rest of that day.

For about a year he prayed for the Lord to put him on the front lines of evangelism.

Now McCoy is speaker and director of Sealing Time Ministries, an Adventist media production company he started with his wife in 2002.

His famous relative, David “Davy” Stern Crockett, was a Presbyterian whose larger-than-life exploits during his lifetime made him a household name. Crockett, commonly referred to in popular culture as the “King of the Wild Frontier,” served as a federal lawmaker from Tennessee in the U.S. House of Representatives. He fought in a revolution in Texas, which was a Mexican state at the time, and was killed by Mexican soldiers in the Battle of the Alamo at the age of 49.

Crockett’s descendants learned about the Seventh-day Adventist Church a half century ago when a church member told McCoy’s grandfather, Alonzo McCoy, Jr., about evangelistic meetings that were taking place in the area.

The grandfather, who was a Nazarene pastor, became concerned for his church member and decided to attend the Adventist meeting, McCoy said.

He kept going to the meetings. After the meetings finished, he studied more, and in 1961, he was baptized.

McCoy’s father, Patrick, joined the church when he was 11 and recently retired from work at Pacific Press Publishing Association in Nampa, Idaho.

The convergence of the Alamo reading and the General Conference session was no accident.

McCoy volunteered to participate in the reenactment after calling and confirming with the operators of the Alamo in January that he was a verified Crockett family descendent. The Alamo operators asked him to read the Declaration of Independence. During the two scheduled readings at the Alamo, McCoy and two other participants dressed in authentic period attire and read the document.

McCoy said he saw parallels between Adventist believers and the troops who made a stand at the Alamo.

“It doesn’t take a whole lot of people to make a whole lot of difference in this world,” he said. “On these grounds there was a line drawn in the sand. The men made a decision where they would stand. They had the opportunity to leave; all but one chose to stay and fight no matter the cost.

“As a Seventh-day Adventist, and as the fifth great-grandson of David Crockett, I understand uniquely what that means,” he said. “At the end of time we need to know where we stand—and the lines are being drawn.”

Ryan and Kelly McCoy can be found at their Sealing Time Ministries booth at GC Session (C1572). 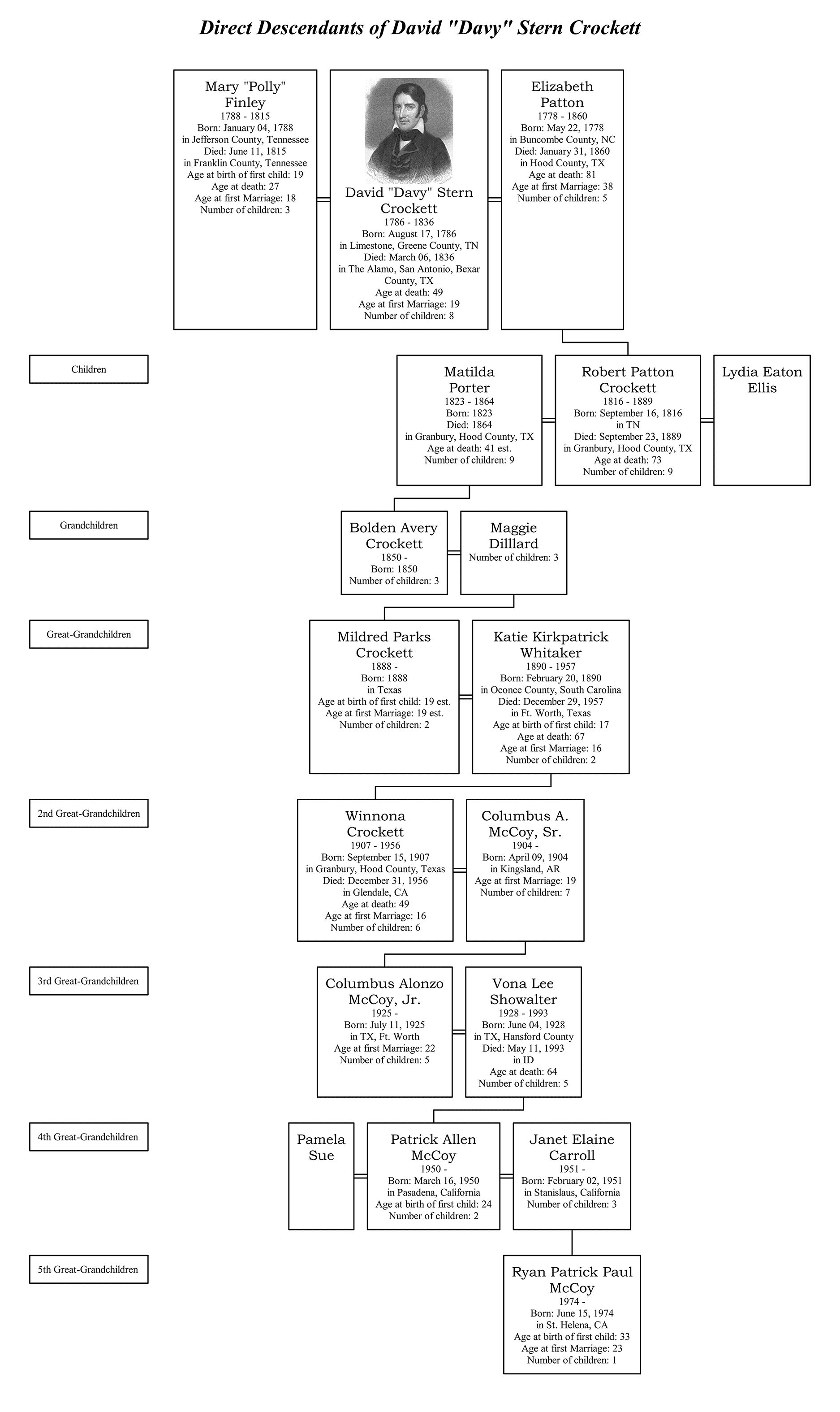