Lighting the Way to Salvation The Trans-European Division (TED) thanks God for His leading in our mission to cities, towns, neighbors, friends, and families over the past five years.

Although by membership the smallest division in the world church, the TED has a rich diversity of culture and languages, and is comprised of 22 countries. Early in the quinquennium a realignment of territory resulted in 38 percent of our institutions, 40 percent of our students, and 32,736 members being transferred to MENA (Middle East and North Africa Union) and other divisions.

Following Jesus’ command to “go and make disciples” the members of our 1,162 churches and 176 companies, together with their 529 pastors and leaders, are actively sharing the love of God with their communities. We are experiencing God’s blessings in many ways, not least in numerical growth: our 6.6 percent overall growth is a reflection of a 16.97 percent gain in baptisms and those joining through profession of faith.

Reaching in is as important as reaching out, and “Kids in Discipleship” (KID) is a biblical model that strongly nurtures the family ethos, encouraging parents to disciple their children effectively. It is complemented by “Messy Church,” which is extremely popular within the European setting. This program of crafts, singing, and Bible stories, combined with a fellowship meal, is usually run on a Sabbath afternoon, and offers families in the local community the opportunity to get to know church families. It is proving an effective outreach/bridge-building tool for many churches. The enthusiasm for “Messy Church” is infectious, and many more churches are preparing to get involved in the program.

Education is important both for personal growth and outreach, and in this quinquennium TED invested almost US$2 million (in addition to other appropriations) in sponsorships and scholarships. In one country our educational institution found a niche in the educational market by incorporating a course on Bible knowledge and Christian values, creating an impressive 8 percent increase in enrollment.

TED schools reported 912 baptisms between 2009 and 2013, and while we give God the glory for this harvest of young people, we also acknowledge a debt of gratitude to our 808 teachers who inspire their students in our schools. Adventist schools are igniting the spiritual interests and aspirations of their students and pointing them toward eternal realities. TED has 5,314 students enrolled in 68 schools within the division.

The division college, Newbold College of Higher Education (NCHE), has increased its student numbers by 33 percent this year, following a challenging recession. Through its new Centre for Christian Leadership, NCHE provides short courses to enable lay members and pastors to update or acquire skills in mission, evangelism, ministry, and spiritual leadership. Young people can take a pre- or post-university gap year at NCHE. During this time they learn more about themselves, the purpose of life, and how to share their faith and get involved in mission activities, mission trips, and evangelistic outreach. The Certificate in Health and Wellness (equal to an Andrews University minor in health) prepares those with an interest in dietetics, nutrition, wellness, and fitness for service in their local church and wider community.

Within the Division the Church of Refuge (CORE) program is an ongoing resource project for retaining and reclaiming our youth. Another avenue for retaining young people is the TED Relay Institute of Youth Evangelism, which has run 25 intensive training courses in eight unions with 570 participants. Following these courses, TED helped sponsor 65 follow-up evangelistic projects run by these young people in their local churches. Involvement is crucial to retention, and youth are the most effective ambassadors to other young people. Their enthusiasm for outreach has been reflected in activities reported via two uplink sites in connection with Global Youth Day.

A youth leadership convention, organized during the Year of Youth Discipleship, produced a resource statement for the division affirming the biblical concept of discipleship for young people. Our first-ever public campus ministries symposium was held in April 2015 with the aim of inspiring Seventh-day Adventist students to be disciples of Jesus and to empower them to share the everlasting gospel on campus.

In London the CRAVE University outreach provided help for all new students registering at university, and created positive connections with local churches. A Youth Congress and two Pathfinder Camporees underpinned these activities.

TED has supported 511 innovative evangelistic projects. For example, “Sweet Gospel and Honey” evangelism trains people in the art of beekeeping as a means to financially support their families.

The “Sabbath Sofa” has been taken onto the streets as a method of sharing the gift of Sabbath rest. It has reached more than 50,000 people.

Health expos are run in the workplace, and “Conspiracy of Kindness” surprises people with unexpected acts of kindness that serve their needs. 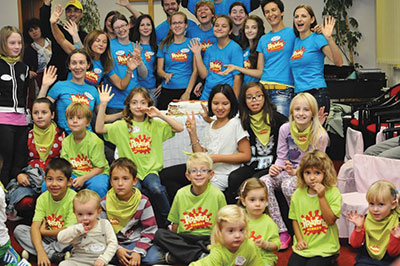 “Bible 3D” was a pilot evangelistic initiative run in Iceland. It guided visitors through an exhibition of the Bible story from Creation to Restoration and followed up with evening programs. Tapping into culture, tradition, and historical Christian roots, it opened doors for dialogue relating to needs in the twenty-first century.

Bible correspondence schools have been providing resources for secular and postmodern people. In 2012 a special emphasis project called “Pass it On” involved the production of a promotional video for a new 12-lesson course “The Story of Paul,” and the production of a book (also entitled “Pass It On”) of inspirational stories gathered from the Bible correspondence schools within TED.

More than 60,000 people were reached in Hungary through “Jesus 7,” a pilot evangelistic series for nominal Christians. Run at Easter, it focused on the life of Jesus.

Mission to the Cities (MTTC) has swept the world by storm, and not least in the TED, which ran its Field School of Evangelism in London in 2013. With its 9.5 million in habitants, London is the largest city within the division. Following the NY13 model, local churches used different initiatives.

Heroes and the Bible Academy was one very successful innovative approach, where members canvassed neighborhoods for local heroes. At a service to honor these people, there is also a presentation of a Bible hero. This is followed by an invitation to register for a Bible academy, where the story of redemption is told in interactive and experiential ways. This combined with the “Sabbath Sofa,” health expos, and other more traditional methods have resulted in more than 800 baptisms to date, with more to come. This has been replicated in the unions as they run their own MTTC programs.

Since its launch in 2010, 7 million people have visited LIFEconnect, the social media platform for evangelism, which has been developed in 19 languages. This has expanded to LCTV, which streams local outreach programs and enables viewers to watch life-changing messages.

Church planting is a high-priority outreach strategy, with approximately 200 new church plants. Couple that with 1,600 small groups and house churches, and the church becomes an irresistible Adventist community.

Unions in TED embraced the Revival and Reformation initiative, with many local church members becoming excited and supportive of prayer initiatives in their congregations. Some churches started online prayer groups and many have become inspired to reach out in ministry to the needy in their communities.

Thanks to an effective training program over the past five years, many of the 15 members of the TED section of the European emergency response team have been deployed to disaster zones in the Philippines and Balkan regions. Time and financial resources were also provided to smaller ADRA offices to strengthen their public relations, fund-raising, and marketing efforts, while approximately US$12 million in Ingathering funds have been collected, which have been used to support global ADRA projects.

The first European health summit undertaken by the three European divisions was held in 2013 with the theme of healing. Of the 550 participants, approximately 150 came from the Trans-European Division.

New health courses and programs include but are not limited to a Certificate in Health and Wellness. They continue to be produced in partnership with NCHE and various health entities. During the first-ever division-wide women’s ministries conference in 2014, part of the program included a health expo outreach in a nearby town, and in just two hours 120 people were contacted.

We give glory to God and thank Him for His abundant blessings and for the opportunity to be a light, sharing the good news of salvation and introducing people to our Savior, Jesus.