Trusting God to Lead the Way

It is my immense joy to witness the fruit of the labor of those who have served in the cause of God and His church in the end-time. The Southern Asia Division has become what it is today because of the men and women and their families who have toiled against all odds throughout the past century to fulfill the vision that God has given them. Their mission continues to be our mission: to reach every person in every home in the Southern Asia Division with the gospel message.

The church in the Southern Asia Division is growing steadily; it now has more than 1.5 million members. However, there’s still much more to be done. Let’s look at some achievements of this past quinquennium:

The Kingdom of Bhutan is a landlocked country in South Asia bordered by China and India. About 75 percent of its 770,000 people practice Buddhism. The current legal framework, in principle, guarantees freedom of religion. Any attempt to convert people to another belief, however, is forbidden by the government and by judicial interpretation of its constitution.

Entry Into an Island Nation

Islam is the official religion of the Indian Ocean–Arabian Sea islands; any other religion is forbidden, and violators are subject to prosecution. Non-Muslim foreigners are allowed to practice their religion only in private; public worship is prohibited.

For the first time, however, in spite of such severity, we have organized a Tamil Adventist congregation. We pray that God will continue to open doors and new avenues in these islands to the gospel message.

Centenary celebrations held in various parts of India included meetings with chief ministers, ministers of state, members of the Legislative Assembly, and police officials. General Conference president Ted Wilson, chief guest at the celebrations, urged the church to put aside all differences and work together for the glory of God. When the work started here 100 years ago, one could hardly imagine how far it would reach. Today, being able to meet state dignitaries was the opportunity we needed to present them with the Word of God.

The Journeying With Jesus program in Andhra Pradesh, which began more than a century ago with two foreign missionaries from the United States, has today resulted in more than 900,000 church members. It is our prayer that God will continue to lead and open doors for us.

The South India Training School, established in 1915, was the drawing board of two premier institutions: Lowry Memorial College and Spicer Memorial College. The latter has endured the changes of time to evolve into the division’s first and only university, now named Spicer Adventist University. In its one hundredth year, this institution has opened the doors to multiple opportunities. It can now offer a great variety of degree courses, thereby strengthening church growth.

The Adventist Media Center has started an FM radio project that covers more than 170 towns surrounding 10 megacities, with a total of some 11.6 million daily listeners to programs in five languages, apart from shortwave programs. It encourages its listeners to become involved in ministry, and helped establish the J. N. Andrews Missionary School.

Television is the most penetrative media in India today. More than 75 percent of the 1.2 billion population watch television. Hope TV India has been able to produce about 7,100 programs in six major and two minor languages. It successfully conducted the first NET Evangelism Series in Ongole, Andhra Pradesh. As production began, we experienced the hand of God opening doors that we previously could not enter. With more than 100 meetings conducted and 300,000 copies of The Great Hope distributed, lives are being changed.

Revived by His Word—Digital technology and a fast-paced lifestyle are what complex cities today are all about. This program is an attempt to encourage people to read the Bible.

Revived Through Prayer—This program has helped people to take time out of their busy schedules to pray and spend quality time with God. People who routinely pray have found it to be spiritually rejuvenating and helpful with all they do in their respective environments.

The Great Hope—The book titledTheGreat Hope has been freely and widely distributed and has impacted countless lives throughout India. This book has opened the eyes of many people who were blind to the truth.

Above 35 percent of India’s huge population live in cities and urban areas. The division chose the city of Mumbai as the focus of the General Conference City Evangelism initiative. Only about 10,000 Seventh-day Adventists live in Mumbai, with its population of more than 22 million. Crossing language boundaries is the biggest challenge to reaching people for Jesus.

In this city dominated by fundamentalists of various religions, where conversion to Christianity is prohibited, health expos and medical camps were conducted, and about 50 meetings in different languages in various parts of the city were organized. As a result more than 1,000 people joined the church.

City evangelism in Southern Asia, however, is not limited to Mumbai. The seven unions within the division have chosen their own cities, which has also resulted in many people joining the church.

The division is blessed with a vast resource of youth, which constitutes more than 60 percent of church membership. The One Year in Mission project enabled young people to give their time and talent in God’s service. 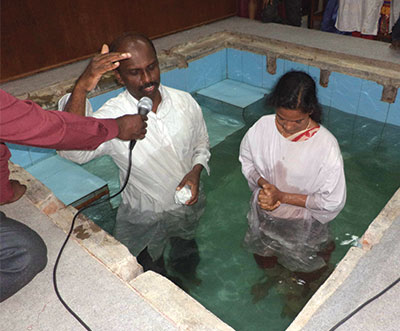 Mission Andaman and Global Youth Day enabled youth to interact with people from all walks of life. By becoming a catalyst of change, they taught those in their communities that even though the world can at times be a cruel place, in the face of adversity there lives kindness.

Throughout the past decade, barriers of race, color, and disability were quickly forgotten as Gary James, director of Renewed Hearts ministry in Atlanta, Georgia, United States, inspired more than 1,500 youth to be connected by a common love for God. General Conference Youth Ministries director Gilbert Cangy encouraged youth not only to be a part of nation building but, even more important, to put forth their best efforts to be a part of kingdom building.

More than 300 delegates attended the Southern Asia Division’s first women’s congress, titled Women of Worth in Action, and were motivated by speaker Diana Jaworski and her dynamic presentations. Jaworski emphasized the worth of every individual and that each one is special in God’s sight.

It had been 30 years since a division-wide lay congress was organized before the one held in 2014 at Falakata in West Bengal, India. During the conference, division and union leaders and lay members were encouraged to extend God’s work and develop churches. More than 1,500 people attended. It was a blessing to see many lay members commit their lives to service and to building churches across the nation.

The 1000 Missionary Movement began in 2007. Today 135 trained young people from throughout the division are involved, and many are still joining.

The 1000 Missionary Movement is about providing strong training spiritually, mentally, physically, and socially, and molding young people to be strong soldiers for God. Such things as e-library projects, sponsorship programs, and cattle bank projects have been used to open doors in unreached areas.

As of 2014 the Southern Asia Division had 293 schools, eight colleges, and one university, comprising a total of 9,896 teachers, and an enrollment of 205,891 students.

The onset of Adventist education in the country more than a century ago has produced a positive development in spiritual, mental, physical, and social well-being for every student. Many former students worldwide owe their careers and many of their accomplishments to Spicer Adventist University, METAS educational institutions, Roorkee Adventist College, Flaiz Adventist College, and the Northeast Adventist College.

Health-care professionals in the Southern Asia Division strive to be kind, as was Jesus. They believe that “the doctor treats, but God heals.”

Two managing trusts in India operate 12 hospitals, some of which are affiliated with such world-class institutions as Loma Linda University Medical Center. Four of them have started nursing schools.

The Ruby Nelson Memorial Hospital, which provides community ophthalmic services, has performed more than 200,000 eye surgeries, conducted 700 free surgical eye camps and 1,800 peripheral eye clinics, and enjoys distinction in the community for its high quality and high volume of eye surgeries. Medical teams perform a cataract surgery in less than 2.5 minutes, 35 surgeries in an hour, and 350 to 400 surgeries in a day.

In conjunction with Adventist education, welfare efforts are greatly expanding. Special schools that cater to differently abled students exist. The Seventh-day Adventist school for those who are visually challenged, Bobbili, and the Seventh-day Adventist school for those who are speech and hearing-impaired, Kollegal, empower students to be “agents of change” in their local communities and are undoing the stigmas often related to them. Many students are able to build a better tomorrow because of the training they receive. Some have finished first at state-level competitions, and others have represented India internationally in cricket for the visually challenged. 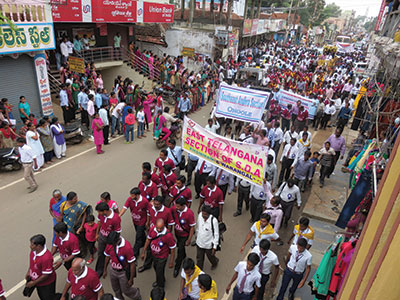 India is challenging because of its massive population of more than 1.2 billion people, who speak hundreds of various dialects and languages—some of which have no script. Vastly diverse cultures and traditions are present throughout the country.

In order to succeed in its mission and meet these challenges, the church must work together, utilizing its resources and the experience and skills of its members. And most important, we must trust in God to lead the way and to reach hearts.