GC Session: One Story At a Time All eyes are on the stage of the Alamodome for the big stories of the General Conference Session.

But those aren’t the only stories here. There are 65,000 other ones all around us.

Everyone has a story—life experiences, struggles and victories, ideas about God and the church.

Take a moment to listen in on some of the stories of our diverse and fascinating church.

Originally from Ukraine, Volodymyr Grinchenko is a pastor in Maryland, United States. He and his wife are enjoying seeing General Conference Session through the wide eyes of their children.

Volodymyr: “The kids like to go treasure hunting in the exhibit hall. All the ministries—what they do and how they present—it mesmerizes them. They can spend hours there walking around without complaining. It’s amazing to see them in action. They go to every booth.”

Zlata: “We’re going to get a few things for our cousins in the Ukraine. We want to send them some presents because they weren’t here.”

Nikita: “The exhibit hall feels like a miniature heaven, because of all of the presents!”

As a doctor of public health and editor in chief at Korean Publishing House, Park combines his interests in health and publishing through a number of projects, including the Korean magazine Home and Health. When asked one of the health concerns in his country, he explains:

“High blood pressure is a major concern. The Korean people eat kimchi—fermented vegetables—every day, and lots of salty food, a probable cause for this problem. A friend of mine taught a class, and many Koreans were there. After lunch, he asked the students how many students of them had kimchi for lunch. Everyone raised their hands. My friend was shocked and thought it was unbelievable. But every meal, every Korean eats kimchi.” You can’t miss this group of 70 Trinidadians: they packed three sets of matching shirts—orange, teal, and blue. The only thing louder than their shirts is their laughter. Their joy is contagious, and they weave humor and reverence into their conversations. Want to know what Gamboa is excited about? Just ask. He’ll pull out maps, stories, and statistics. The young adults in the church in Belize, for example, are on fire, according to Gamboa.

“We have a total of 40,000 church members in Belize, and the population is 350,000. We are the second largest denomination in the country, after Roman Catholics. Actually I was a Catholic, but then the Lord took me to a home that belonged to a Seventh-day Adventist, and they began to share their faith with me. And, to God be the glory, I then accepted the message. That was about 25 years ago.” In Tahitian tradition, if a woman wears a flower in her hair on the right side, she is single; but once she moves it to the left—the side of her heart—it indicates that she is engaged. With a quiet confidence, Salmon pointed out that she now wears her flower on the left. She’s attending the session with her mother, an elder in one of the main churches in French Polynesia.

“I think older people in our church should pay more attention to the young people. There is a generation gap, so we don’t understand each other. When we have ideas, they do not accept our ideas.” These friends have a lot in common, including a touch of jet lag and a love of ministry. (Mary helps create children’s programming for Hope Channel India, and Ruby’s husband is the director of the channel.)

Mary: “We just came this morning from India. It took 24 hours in flight, and we changed at least three different flights to reach here. We haven’t slept yet, but we find it wonderful to see all the people from different places. It feels like heaven.” Norally and her sister love to travel together, so they were excited to make the trip to Texas. They’re volunteering to represent the Dutch Caribbean in the exhibit hall.

“Today we—the Dutch Caribbean—were voted a union. Just this morning. I’m so happy, so happy! I was converted to the Adventist Church 17 years ago. My brother became an Adventist first, and he took me to a campaign. It was seven long weeks under a tent, but God is good. I loved God all my life, but I was feeling there was something more I had to get—and now I have it.” These California boys love to boogie board and even made time for a stop at the ocean on their way to San Antonio. The biggest surprise for them about the session? The amount of people—and activity.

Camden: “Youth and adults, I feel we should all be equal in the church.” Charlie is the assistant to the president for Native American Ministries for both the Arizona and Nevada-Utah conferences. He strives to preserve Navajo tradition in his household, for example, by speaking the language with his children and wearing native costumes to camp meeting.

“Native Americans want you to stay longer if you’re working with them; and getting to know people is important to them. You don’t want to just be there for a year or less. The more time you spend there, they’ll get to know you, and the trust will be established. If you do a quick meeting, they’ll make a decision for Christ, but then they’ll fall back and go back to the church of their initial belief. You have to be there to support them.” Three generations of Anissa’s family are attending the session together. Though their pride in Grand Cayman comes through immediately, they’re quick to note how much they’re enjoying the American history sites in San Antonio.

HQ/AR : “I love the flag in your hair. Are you going to wear it all week?”

Anissa: “Maybe. It depends on the outfit.” The question, “What do you do?” is a complicated one for Weaver, because she does a lot. She is a psychologist and an entrepreneur, and works for the Ministry of Youth Empowerment. She’s currently expanding her business to include wedding rentals so that brides who can’t afford to buy the major items—such as a wedding dress—can rent them instead.

“We were playing a game a few moments ago, guessing where people are from, based not only on their attire but from their interactions and their body movements. I’ve guessed a whole bunch wrong, but I got some right. My cousin’s husband runs them down after we give our final guess to find out where they’re from, and they respond. But aren’t we all God’s children? It’s beautiful.” 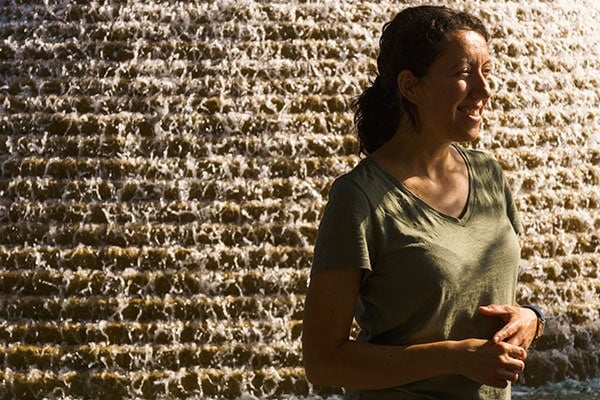 Over the years, Vania and her family have lived in several places, including Alaska. With long hours of summer daylight and long hours of winter darkness, Alaska taught her to live by the clock, rather than the sun. Every place they live teaches them something new.

“I’m originally from Portugal, but Texas is home now, because my husband is a pastor here. I just always knew I was going to be a pastor’s wife. All the time, I just knew it. I like it, but the hardest part of being a pastor’s wife is moving around.