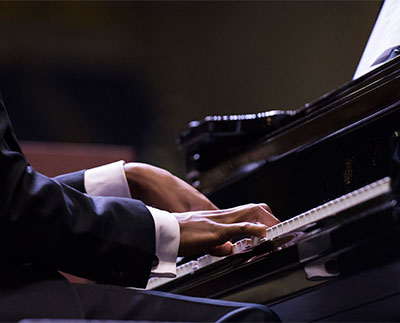 The vocal ensemble United knows what it means to exercise faith. This group from La Sierra University in Riverside, California, despite only having been formed less than two years ago, has already traveled significantly and is often used by La Sierra as an outreach tool. As a smaller group, ranging from 10 to 16 members, they are flexible enough to respond to a last-minute invitation and represent the university in different contexts.

While their director, Javier Gonzalez, had been scheduled for several appointments as a solo tenor during the session, the group was not scheduled for any performances. Thanks to many prayers, grassroots work, networking, and blessings from the Holy Spirit, United is now scheduled to perform on various stages two or three times a dayfor the duration of the session. The group also had the privilege of performing on the Alamodome main stage during the evening worship of Monday, July 6, with the Chamber Singers of the Universidad Adventista de Chile. Gonzalez, who works at La Sierra as a professor of vocal studies, said, “It shows that even when plans don’t go as you want them to, God’s Spirit leads.”

In fact, service is an integral part of what makes this group special. Music, for United, is not just about entertainment. It’s about ministry and connecting to people, with perceptions of who the musicians are offstage being of much higher importance than of who they are onstage. Members of Unitedcan be seen mingling with the crowds both before and after performances.

Gonzalez has a special burden for imparting to his students the concept of music as service, which he learned from his college mentors, Dr. James Bingham and Dr. Virginia-Gene Rittenhouse. “If we can’t serve, then we shouldn’t be on stage because music is a divine gift. It’s a gift where can we actually participate with Him. If He gave me the gift, it’s my job to give the gift away. In the end, the reward will be the people we touch.”

Music not only has the ability to serve God’s people but also has the unique and singular ability to unify the church in a way that nothing else can. “When you get people into a room to listen to a concert, they are, in fact, connecting to each other, no matter their politics, race, color, creed, or beliefs. In that moment,” says Gonzalez, “music disarms all of us, and we all become one.”

It seems that for this group, their name truly fits its mission.