The Flight of Faith 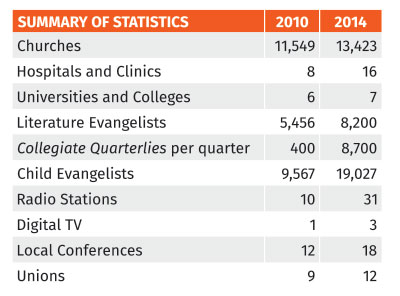 Rising from the ashes of war, poverty, and illiteracy into admirable progress and Christian service, a great mission story continues to unfold in this region of the world church. Youngest in age, yet conquering immense challenges, the East-Central Africa Division (ECD) is among the fastest growing divisions of the Adventist world church.

This territory has a population of more than 350 million, but a church membership of a little more than 3 million. A lot of work is left to do. From a human standpoint this seems an impossible task. Yet beyond a facade of seeming defeat and unending challenges of a sin-ravaged planet, these past five years have seen the East-Central Africa Division triumph in mission as never before.

From the beginning of the quinquennium Revival and Reformation took center stage as church leaders rolled out an ambitious strategic plan that carried both world church initiatives as well as new, bold programs meant to meet local needs and mission requirements.

As Christians we are called to be not only light but also salt. While we seek, live, and communicate truth as found in Jesus Christ, we realize that without visibility and meeting people where they are, we make little progress. Our influence affects how we communicate the message of hope.

In this regard ECD set out a plan to make the church visible in its communities. This ambitious branding initiative included, but was not limited to, putting up new structures and facilities in addition to soul winning, nurture, healing, and preaching. This translated into raising new church buildings and administrative facilities, new hospitals, and new structures in our institutions.

We are happy to report progress in these areas. Some areas are soaring more than others, yet all have made advances. Rising from the tide of genocide, the Rwanda Union has seen tremendous progress in this regard.

The Adventist University of Central Africa (AUCA), in Kigali, Rwanda, has seen major projects finished, starting with an ultramodern multipurpose hall, with a seating capacity of 2,500; a state-of-the-art Science and Technology building, and new hostels, which are under construction. Local fields and conferences have set up new offices, and church schools and institutions stand out as the best in areas where they are located throughout Rwanda. We thank God for such progress.

Modern church buildings have started to rise up, replacing former structures that formed our houses of worship around the territory. Our hospitals and health facilities have also seen admirable face-lifts. New hospitals are being built in Mwanza, Tanzania; Bujumbura, Burundi; and Nairobi, Kenya. Many other health facilities are being built all around the territory, such as Rwanda Adventist Clinic and a Lifestyle Hope Center in Kasese, Uganda.

Some other notable completed projects include:

The Adventist Church in ECD has made strides to make the public aware of its existence and mission. Following the Global Youth Day program led by youth ministries, the visibility of the church has risen tremendously in the past two years through random acts of kindness and interfacing with the public.

Deliberate activities have been organized to impact the community. Such activities include community service, blood donations, literature distribution, medical camps, disaster response, children rescue centers, and many others.

The ECD visibility initiatives have gotten a boost by visits from General Conference president Ted N. C. Wilson to our territory. These have created awareness of the church in countries and cities he has visited. During these visits Wilson has met the presidents of Burundi, Kenya, Rwanda, and Tanzania.

More than US$1.5 million has been invested in training more than 500 workers in local universities. Of these, more than 300 workers have graduated from the Adventist University of Africa. “Extraordinary tithe” funds from the General Conference have assisted in educating more than 200 workers from the Democratic Republic of Congo, Burundi, and South Sudan, where we have the smallest number of pastors with a degree in theology.

The core initiative of ECD these past five years was encapsulated in the slogan “Destined to Fly.” All the ministries and institutions of ECD focused their efforts on delivering mission with speed, excellence, and boldness. This concept of mission we have come to capture as a flight of faith. Rallying around the core methods of preaching, teaching, healing, and discipleship, all programs and initiatives were designed from the ground up to attain results that were relevant and significant. All departments and ministries worked toward this end.

Women’s ministries is an example of great outreach, as well as nurture programs that have revolutionized the way we will henceforth do mission in this region. Time is not sufficient to outline the much that has been done in this regard.

Our publishing ministries continue to soar, with the number of literature evangelists rising daily, and all of them focused on delivering hope into every home.

Health and education have, in most cases, been successful entering wedges. The resulting success stories are numerous. 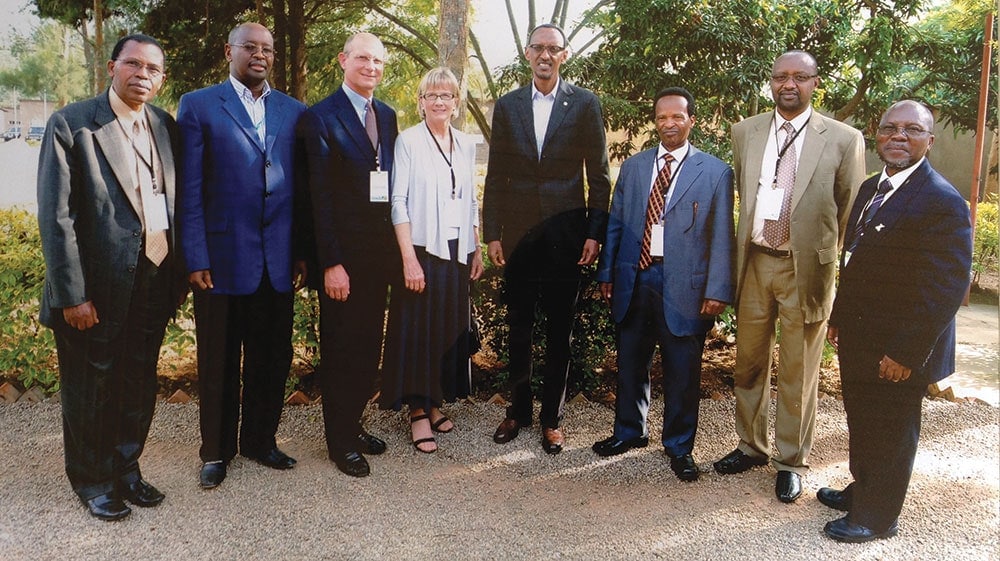 Mission to the Cities. In 2013 another major campaign under the Mission to the Cities initiative was conducted in Kinshasa, Democratic Republic of the Congo. Kinshasa is one of the cities with the fewest church members in the ECD. The campaign, conducted by division officers and directors of departments, was held in 14 different sites and resulted in 1,523 individuals being baptized.

Following the launch of Kinshasa for Christ, each of the 12 ECD unions subsequently identified a city for this initiative, and thousands of baptisms have resulted. Our membership continues to grow.

Stewardship revival weeks and seminars conducted annually throughout the division are initiatives that have helped members grow into wholesome stewards. Trust services improved, and for the first time ECD was able to submit a report to the General Conference in this area. Percentage performance in tithe has risen from 19.5 percent in 2011 to 49 percent as of December 2014. The strategic target is 70 percent by the end of 2015.

Ministry to Deaf Individuals. Since 2010, 503 deaf individuals have been baptized. About 1,509 deaf individuals in East Kenya Union Conference attend church regularly. A special camp meeting was conducted in August 2014. Five deaf pastors are studying theology at the University of Eastern Africa, Baraton, and 10 deaf lay preachers receive a monthly stipend.

Chaplaincy Programs. Prison ministries in Kenya, the Democratic Republic of the Congo, Uganda, and Juba in South Sudan have had good results for mission. In Kenya 4,560 inmates were baptized. The members worship in 39 prison congregations. Ten churches have already been constructed, and plots for the remaining 20 have been allocated to the church by the government.

In Uganda the ministry is on fire in Amolatar, Jinja, Ishaka, Kasese, Kampala, etc. The government has invited the church to extend its prison ministry to other prisons in the country. In some prisons the church has donated satellite equipment to facilitate viewing of church programs by inmates.

The nurturing of students in public universities has never been better, especially in Kenya, where government continues to pay chaplains appointed by the church. On some secular university campuses, administrators have given land for the construction of places of worship.

HIV/AIDS Ministries. Unions in the ECD have appointed coordinators for HIV/AIDS victims. Several HIV/AIDS support groups have been organized. Associations of Adventists Living with HIV/AIDS have been formed, and some are now registered as community-based organizations, running a variety of programs. 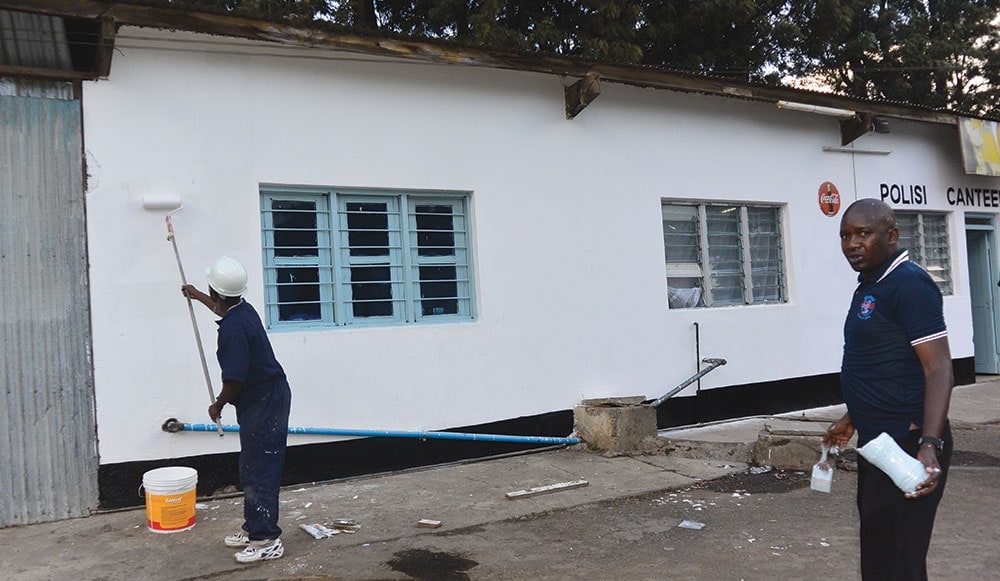 The church in the ECD has experienced the following this quinquennium:

Church members have grown spiritually as a result of community involvement in acts of compassion and kindness. Many people were led to Christ, and their hopes were rekindled.

The general public has become more aware of the Adventist Church in its midst, and is seeking to know them better. Change of perception is clearly seen in several parts of the division territory.

In a territory with more than 350 million people, the church is penetrating with messages of hope through public media. The church is felt in hard-to-reach distant places, and lives are changed positively on a daily basis.

We are glad to belong to this global family of faith, and take our place with humility and passion. Leading people to Christ—nurturing, teaching, preaching, and discipleship—must continue as we look forward to the second coming of our Lord and Savior, Jesus Christ. Until then, we will strive to unite in His mission of preparing the world for this great reunion day in this section of the world church.