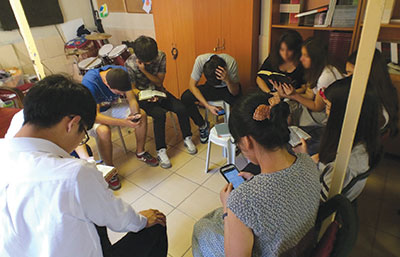 On January 1, 2012, the Middle East and North Africa Union Mission (MENA) took its first steps to face an impossible-looking challenge.

After more than 100 years of work in the region, the church was not only still small but also declining in membership. Thus, in 2011, the General Conference voted to form MENA and give it increased attention by attaching it directly to the world church headquarters.

MENA, which is larger in territory than all but three of the world divisions of the church, is home to 20 countries and more than 500 million people. And that is where MENA’s challenges begin.

Challenge 1: Too Many and Too Few

If all the Adventists in the North American Division (NAD) were divided up so that no two lived in the same community, and every member contacted one person each day, every person living in the NAD could be contacted within a year. It would take about two years for India, five months for the South American Division, four months for the Philippines, and 58 days for the Southern Africa-Indian Ocean Division to accomplish the same thing.

In MENA, however, if every Adventist member moved into a different city and contacted one person per day, it would take almost 450 years to make the first contact with everyone who is currently living in its territory.

To put it simply, MENA has too few members to reach its vast population, and that brings us to another problem.

Adventist members around the world misunderstand what the situation and living conditions are like in MENA, and are hesitant to come to help. And people and governments in MENA misunderstand who Adventists are and don’t want us to come. They think that all Christians drink alcohol, eat pork, bow down to statues, live the way people do in the movies, and want to start up “crusades” in order to extort their oil.

Sometimes all these challenges can seem impossible to conquer, like the fast-flowing Jordan River that the Israelites faced in Joshua 3. But Israel had a mission, and they moved forward. MENA also has a mission: to share Jesus with the people of the Middle East and North Africa.

To accomplish this mission, MENA came up with an idea: let’s plant Adventists! God needs committed Adventist members who are willing to be planted in communities across the entire region: people who are willing to step into the water (as did Israel at the Jordan) even though the river seems impossible to cross; people who will mingle with those around them, meet their needs, win their confidence, and invite them to follow Jesus.1

Here are some ways MENA is attempting to plant people in communities in which lives are impacted and changed, one by one.

In many ways the Protestant Reformation owes its very existence to the sacrifice of dedicated Waldensian families. They often sent their brightest and best young people into the heart of enemy territory and enrolled them in the major universities of the time. There these young people quietly planted the seeds of the Reformation. Many of them watered those seeds with their own blood.

Following in their footsteps, MENA’s Waldensian Student (WS) Program plants committed young adults in major universities. This past year MENA placed 23 Waldensian students in universities, and this year 46 young people are quietly making a difference in these academic communities.

In one city a group of Waldensian students diligently studied language all last year. When they took the entrance exam, however, they didn’t get high enough marks to enter their university of choice. The students qualified only to enter a university in another city. They moved to the new city with a feeling of disappointment. Within three months, though, the students had made many new national friends and had started up several Bible studies. After a special week of nightly meetings with an experienced Bible worker, 10 of the Waldensian students’ classmates gave their hearts to Jesus and asked to prepare for baptism.

Sometimes MENA plants people in a community as part of a small business or service. The goal of these centers of influence (COI) is to meet needs in the community and build friendships. Seven COIs are currently operating in the MENA region.

Rachael2 runs a COI for Syrian refugees in one of the countries. She now has 50 to 70 refugees attending a branch Sabbath school every week, and many are taking Bible studies.

While living in Syria, one woman had wanted for many years to learn about Jesus and the Bible, but no one would tell her about Him. Even a priest she visited told her that it was impossible to teach her about the Bible unless she left the country. Then war came, and she and her family had to flee. Life was hard as a refugee, but one day she met Rachael at the COI. She is thrilled that she can study the Bible, and she now has accepted Jesus as her personal Savior.

MENA can’t get visas for missionaries or regular church workers to enter many of our countries. And yet many foreign professionals are hired each year to work in these same countries. Total Employment is a program that plants dedicated Adventist professionals in these hard-to-enter places. Sometimes these people are called “tentmakers” because they work to support themselves, as did the apostle Paul. 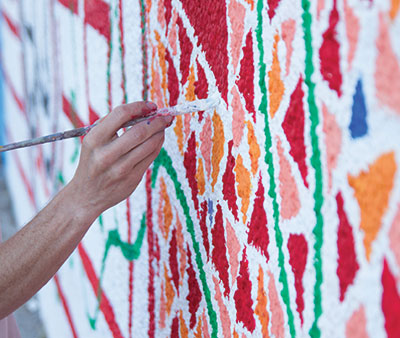 Melody opened a beauty spa in one of our countries. Her customers have been impressed that she would sacrifice financial income by closing her shop on Sabbath in order to worship God. They have started asking her deep emotional and spiritual questions, and she has begun to share the Bible with them. Many of her faithful customers have become friends and, in some cases, secret prayer partners.

Witness on a Wall

One of the unique initiatives in MENA uses public art projects to create powerful connections between Adventist artists and inner-city youth, professional art students, and community leaders in a number of our large cities.

Doors are being thrown open all around us. Many people are questioning their own belief system as they witness the brutal violence being carried out in the name of religion. These seekers are not open to advice from people they consider to be “pork-eating and wine-drinking pagans.” When they become friends with a dedicated Adventist, however, they are amazed at what they learn and are open to hearing more. The problem is that MENA doesn’t have a single Adventist member living in most of our massive communities to answer their questions.

So there you have it. MENA has great challenges, but also an idea. To make the idea become a reality, we need people on the ground. Are you willing to accept a seemingly impossible challenge and join us? As we walk into the water, God will stand the river on end and finish the work.

Amen. Even so, come, Lord Jesus.