A Message of Hope and Wholeness 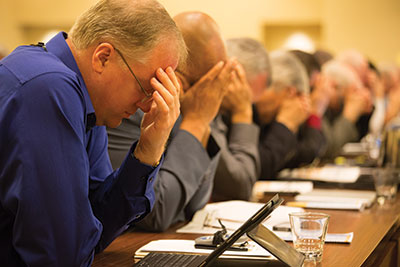 The North American Division (NAD), which comprises the United States, Canada, Bermuda, Guam, and Micronesia, is one of the most diverse areas of the Seventh-day Adventist Church. The region’s total population of 350 million represents almost every people group on the planet. This presents a wonderful opportunity to reach our diverse people groups, but it’s also a huge challenge to one of the youngest divisions of the world church. Currently, approximately 1.2 million Adventists attend 5,400 churches and groups. These congregations are led by 3,200 pastors who nurture, lead, educate, and evangelize not only the local church but their surrounding communities as well.

The Adventist Church is known throughout North America for its education system and the 1,200 (pre-K to university) educational institutions it operates. It also serves the health of its local communities through the Adventist Health Network, which provides its healing ministry to more than 17 million people each year. During the past five years more than 193,000 people were baptized into the North American Division.

The Seventh-day Adventist Church was founded in North America in 1863, and its first mission work centered here. It wasn’t officially organized as a division, however, until 1985, when Charles E. Bradford was named its first president.

In 2010, at the fifty-ninth session of the General Conference, a new team was elected to lead the North American Division and its more than 1 million members in fulfilling the mission of the church. They quickly undertook the task of establishing fresh approaches to fulfilling the gospel commission. A strategic plan was developed entitled REACH North America. Its mission is to reach not only North America, but also the world, with the distinctive Christ-centered, Seventh-day Adventist message of hope and wholeness. The goal was for REACH to become part of the church’s culture and a way of life.

Once this plan was set in place and communicated to every level of the division, key goals, known as the “building blocks,” were developed to provide a missional focus and a foundation for the spreading of the message of hope and wholeness. These initiatives focused on six key areas:

The Adventist Learning Community—Reaching people through the use of online education and training is the goal of the Adventist learning community. Millions of people take online classes for education, recreation, and career building. The goal of this building block is to utilize the numerous resources that are created by the many educational institutions and resource centers in the church and present them in one online location that can be utilized by both members and others. Local churches can use these resources to help reach their local communities and provide training, and members can use them to strengthen their own skills.

Refugee and Immigrant Groups—For every three church members in the North American Division, there is one person from an immigrant or refugee group. This represents a tremendous challenge and opportunity to reach the world as various people groups come to live here. Currently immigrants and refugees are one of the fastest-growing segments of the church in North America.

Women in Pastoral Ministry—Increasing the number of women in pastoral positions is an important and strategic part of the overall goals of the division. Female pastors fill vital roles in evangelizing and nurturing church members. Currently only 107 female pastors serve in the division, and a majority of the pastoral workforce will be retiring soon. The goal is to double, in the next five years, the number of female pastors employed by the church.

Social Media—The use of social media has changed the way the church communicates, not only to its members but to the world in general. As society becomes more secular, new outreach methods must be utilized to reach populations that would never set foot in a typical Adventist church.

Transformational Evangelism—In the North American Division more than 50 urban areas are home to populations of at least 1 million people. Proportionately speaking, urban areas are where the church is least successful when it comes to evangelism and outreach. New methods must be developed to reach the populations of these ever-growing cities.

Key goals, known as the “building blocks,” were developed to provide a missional focus and a foundation for the spreading of the message of hope and wholeness.

The North American Division faces challenges today that we couldn’t have imagined in earlier generations. God will give us the grace and power to accomplish great things in the implementation of these initiatives.

The initiatives are unique in that they help to tear down the silos that typically occur when departments and ministries focus only on their areas of expertise. When common goals require different ministries to work together for the same outcome, great things can happen for the Lord.

One example of this is the Paradise Valley church in San Diego, California. The church is located near the former Paradise Valley Hospital, which was closed several years ago after a downturn in the local economy. Pastor Will James opened a refugee ministry at the church. Feeding programs, English as a second language (ESL) classes, and a secondhand store provided much-needed help to the quickly growing immigrant population. The church now represents more than 60 cultural groups, and its membership has grown.

The church is currently planning ways to reach out to the more than 300,000 members of the Arabic community who have immigrated to the area. This successful project shows how initiatives for refugee and immigrant groups, as well as transformational evangelism, can play a key role in the life of the church and meet the needs of local communities while reaching out to a large urban population with new methods of evangelism.

Probably the most successful outreach to the communities in the North American Division was the Bridges to Health and Your Best Pathway to Health events held in San Francisco and Oakland, California, in 2014 and San Antonio, Texas, in 2015: these were a joint partnership between Adventist-laymen’s Services and Industries (ASI), the North American Division, and Adventist Healthcare Network. These projects provided about US$24 million of free health care to more than 8,000 people in a five-day period. The projects were lead by Lela Lewis, M.D., president of the Pacific Union chapter of ASI, who dreamed of providing for the physical and spiritual needs of the poor and underinsured in large cities. More projects are planned for the near future, and the goal is to expand to regional areas so that more people can be reached with the church’s wholistic message. Another unique challenge to the division is the transfer of the Guam-Micronesia Mission (GMM) to the North American administrative territory. This remarkable missional opportunity brings an overseas mission field directly to the division territory and provides a fresh glimpse into the challenges and opportunities a mission faces. GMM is home to more than 5,000 members and 21 churches. It also provides many student missionaries with teaching jobs at the numerous mission schools throughout the islands. The church also runs a hospital and health clinics to meet the medical needs of the residents. This direct method of contact is vital to reaching the diverse cultures that make up the mission.

In 2013 the North American Division made several key decisions on how it would operate its media ministries. The Adventist Media Center in Simi Valley, California, was closed, and the ministries that called it home relocated. This gave the ministries the opportunity to evolve their approaches to meet the needs of their rapidly changing audiences. It Is Written, under the direction of John Bradshaw, relocated to Chattanooga, Tennessee. Faith for Today, with Mike and Gail Tucker; La Voz de la Esperanza, led by Omar Greive; and Jesus 101, directed by Elizabeth Talbot, moved their offices to Riverside, California. Breath of Life, under the direction of Carlton Byrd, remained at its home on the campus of Oakwood University, and Voice of Prophecy, with its new leadership team of Shawn and Jean Boonstra, relocated to the mountains of Loveland, Colorado.

Despite these transitions the evangelistic efforts of the media ministries remained strong as major events were held in Edmonton, Alberta, Canada, by John Bradshaw; Huntsville, Alabama, by Carlton Byrd; Minneapolis, Minnesota, by Shawn Boonstra; New York City, by Omar Grieve; Atlanta, Georgia, by Mike and Gail Tucker with their Mad About Marriage series; and by Elizabeth Talbot, as she focuses on training people to lead others to Jesus.

Another change was the transfer of control of the Pacific Press Publishing Association, located in Nampa, Idaho. Previously Pacific Press had been controlled and operated by the General Conference, along with the Review and Herald Publishing Association (RHPA) in Hagers-town, Maryland. In June 2014 the constituents of the RHPA voted to cease print operations at the Hagerstown facility, and authorized a plan to transfer assets to the Pacific Press, which would now be controlled and operated by the North American Division to better meet the division’s publishing needs.

A final change to the North American Division structure occurred in late 2014 when the board of Oakwood University voted to approve the transfer of its operation from the General Conference to the North American Division. This made Oakwood University the only Adventist educational institution to be owned and operated by the division. Local union conferences operate all other tertiary educational institutions. Oakwood has a rich educational history in the church, and the division is excited about the possibilities that it will provide to the missional training of future church pastors and leaders.

The membership of the North American Division is a microcosm of the greater populations that live in and call North America home, and the opportunity for mission is vast and great. God will show us the way as we strive to reach the people of North America with the healing message of hope and wholeness.