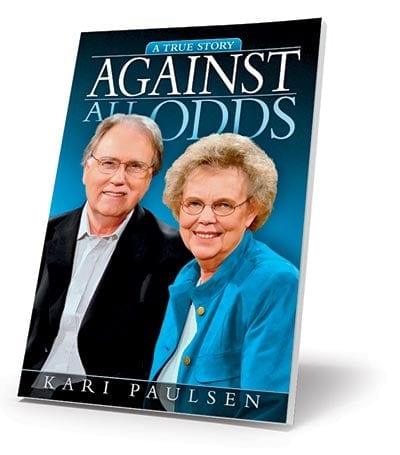 This excerpt from Kari Paulsen’s remarkable spiritual memoir, Against All Odds (Pacific Press, 2015), captures the candor and warmth of a book we heartily recommend to all Adventist Review readers. —Editors.

As I look back, I see clearly that the upheavals of my childhood and teenage years had instilled in me a sense of independence and a habit of facing problems head-on. For me, these were lessons born of necessity. My emotional, spiritual, and perhaps even physical, survival had so often depended on my willingness to take responsibility for myself and to embark on a course of action without the support or approval of others. I was probably born with a good, healthy streak of independence in my nature, but my life circumstances had certainly served to strengthen and grow this tendency.

Yet, the more time I spent with my new Seventh-day Adventist Church family, the more I realized that being a Christian—that goal for which I’d strived for so long—meant living in community with other people. And that meant being accountable to others, being willing to defer to each other for the sake of harmony and—to be honest—being willing to put up with each other’s various quirks and inconsistencies. Rather than the fierce independence that had taken me thus far in life, I now found that a spirit of interdependence was what was needed.

In the years since, I’ve come to understand that the ideal model for Christian community finds its genesis in the very nature of the Godhead, that divine relationship between the Father, Son, and Holy Spirit. For instance, think in Scripture where God says, “Let us make man in our image, after our likeness” (Gen. 1:26, KJV). There’s a foundation of mutuality there; a repudiation of self-reliance; an acknowledgment of perfect interdependence. Of course, when this perfect pattern for community is transposed into the everyday, imperfect reality of the church, it’s not always smooth sailing.

As a newly minted member of the Adventist Church, I soon learned two important lessons about Christian community that have stayed with me. One lesson was positive; the other lesson brought with it profound disappointment.

First, I learned the powerful role that spiritual and emotional mentors can play in one’s life, helping you through the hard times and deepening your spiritual roots.

Second, I learned that my new church wasn’t perfect; I’d imagined it to be a veritable Garden of Eden, but I’d forgotten that even that garden had its resident serpent.

It was 1951, and I was 17 years old. I was still estranged from my father, and I continued to live in the home of my aunt and uncle. I’d finished at Notodden High school, but I still had a deep hunger for more education.

I had a new faith and a new sense of purpose in my spiritual life, but my material situation left much to be desired. I had no money and I was becoming increasingly aware that I couldn’t stay at my aunt and uncle’s house forever.

What did the future hold for me? I had no idea.

During this time of uncertainty, two women in particular at the Adventist church where I worshipped became my strongholds. The first was Maj-Britt, a Swedish woman who sang beautifully and played the guitar. She was married to the church schoolteacher—the one who’d first signed me up for the Voice of Prophecy Bible lessons. Maj-Britt had a motherly touch and dispensed warmth and good advice in equal measures.

A second woman, Tulla, was also a spiritual inspiration to me. She had grown up with the stigma of illegitimacy—a terrible burden in those days. But she exuded a sense of such peace and joy. She would recite long portions of Scripture, sing hymns, and recall passages from the writings of Ellen White.

Between these two “mothers in Israel,” I gained a sense of calm and stability, and began to make plans for my future. The schoolteacher and his wife suggested I go to work at the church’s Hultafors Sanitarium in Sweden, a day’s journey away by train. I wrote to the sanitarium, and received word back, saying, “Come; we have work for you as a nurses’ aide.”

I embarked on my adventure on September 1, 1951. For an untraveled, rural girl, that day-long train trip to Sweden might just as well have been an expedition to China. Marco Polo had nothing on me.

I changed trains in Oslo and Gottenberg, and by the time I arrived at Hultafors at 8:00 in the evening, the station was closed and my trip was beginning to feel less like an adventure than a nightmare. I stepped off the train and looked along the platform for the person from the sanitarium who I’d been assured would meet me. The station was deserted.

I walked up and down the platform a few times, then checked out the front of the station in case my contact was waiting for me there. There was no one.

I spoke only Norwegian—and an obscure dialect of Norwegian at that—and I didn’t even know where the sanitarium was located or how far away it was. . . .

By 1951, Hultafors Sanitarium already had a long and storied history. The first buildings of the sanitarium were constructed in 1889, and in the years since it had expanded in size and services and had built up an excellent reputation as a spa and health resort. It especially catered to those with cardiovascular disease. It offered a strict vegetarian diet, hydrotherapy treatments, and a beautiful location among pine trees overlooking an alpine lake. It had become a nationally renowned facility for those trying to shed weight and regain health.

I walked up the zigzagged road, carrying my suitcase, and with every step I felt more lonely and lost.

Finally, through the trees I caught a glimpse of the sanitarium buildings and I was overwhelmed with relief. I’d made it! And, even better, the first person I met was a young girl who spoke Norwegian. She found out where my room was and helped me settle in. I was assigned to share a room with a girl who spoke only Finnish. We couldn’t understand each other at all—but it didn’t matter to me. I was just delighted to finally be among other young people who shared my faith.

The Norwegian girl invited me to a party the following evening to meet some of the other young people. “It’ll be at a house way back in the woods,” she said. “Just walk back as far as you can, and you’ll find it.”

There had been no young people in the little church back in Norway, so this was like a whole new world opening up to me. Here were Adventist young people—we believed the same things; they wouldn’t tease me about my “strange beliefs.” I could relax and be myself and, for the first since the Paris youth congress, just enjoy being with other teenagers.

I looked forward to that party. I made my way along the path through the woods until I found the little house with its lights ablaze. As I knocked on the door, I heard music coming from inside, music that sounded strangely familiar. As the door opened, the sound burst out, and I recognized it immediately as dance music. The glimpse I caught of the young people inside made it clear that this was, indeed, a dancing party, and my heart just fell.

My Norwegian friend came to the door and gestured to me to come inside. In confusion I said, “But this isn’t what I thought—I can’t come in.”

My Norwegian friend came to the door and gestured to me to come inside. In confusion I said, “But this isn’t what I thought—I can’t come in.”

“Don’t be so silly, Kari,” she said. “We’re just having fun—harmless fun. Come inside; you’ll see.”

I had no words, so I simply
turned and retraced my steps through the woods.

It’s difficult even now to describe what I felt. From the time I’d vowed to God to become a Christian, to the time I was finally baptized into the Seventh-day Adventist Church, I felt I’d been caught up in a never-ending struggle. I’d faced down my father and been exiled from my home; I’d endured the teasing of my school friends; I’d stubbornly continued to meet and study with that “strange group” of Adventists.

Over the years of my spiritual quest, I’d also given up certain things, and it hadn’t always been easy. The unclean meat had gone first. But over the following months and years, I’d also stopped going to the cinema—a difficult sacrifice at the time. I’d stopped wearing jewelry and adopted a plainer way of dressing and doing my hair. And yes, I’d given up my beloved dancing as well.

In that walk through the woods back to my room at Hultafors Sanitarium, I found myself caught in the grip of profound disillusionment.

What have I done? I asked myself. Could it be that I’ve upended my life—given up so much, and endured so much—for a sham faith? How else could Adventist young people so brazenly do what I’ve been taught is wrong?

I cried myself to sleep and in the morning woke up just as discouraged.

Over the next few days, as I learned my new duties at the sanitarium and got to know some of the other staff, my mind kept churning. I was just an infant in the faith, and I began to wonder if perhaps I’d be better to simply write off my whole experience with the Adventist Church as a failure.

At some point during this time, I remembered Maj-Britt’s final words to me before I’d left home for Sweden. At the time, her comment had made little impact on me. “Remember, Kari, you will find very few people in the church with wings,” she had said. “And never forget that neither you nor I are angels either.”

Maj-Britt could never have known how prescient her words would be. Of all the pieces of wisdom God has sent my way through the years, this simple truth about human nature has perhaps been the most important in my life. It’s a truth that has come to my rescue many times, helping me to regain a proper sense of perspective in the face of events that could otherwise have led me into bitterness, resentment, or disillusionment.

As I went about my work at the sanitarium, I began to reflect that perhaps the dance party said more about individual human fallibility than it did about the authenticity of the community of faith I’d joined.

We’re not perfect—none of us, I kept reminding myself. And Kari, you’re not exactly sprouting wings either!

My disappointment remained, but the cords of trust and faith that bound me to my Savior stayed strong.

Kari Paulsen, with her husband, Jan, president of the Adventist world church from 1999 to 2010, has served the Seventh-day Adventist Church as a missionary, teacher, counselor, and mentor for nearly 60 years. Her new volume is available at Adventist Book Centers and online at www.adventistbookcenter.com.