Legally Blind but a Vision for Service 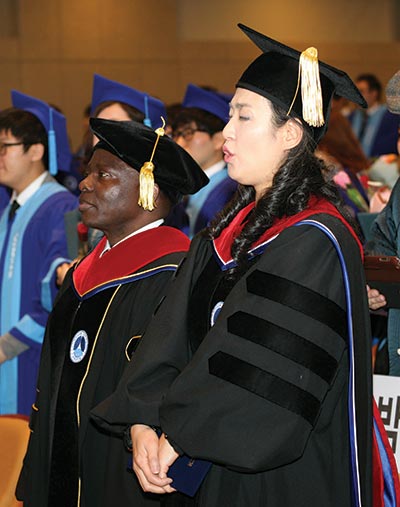 The Seventh-day Adventist Church’s flagship university in South Korea had to be convinced to change its policy to accept Miriam Sunmee Yun-Welch into its Graduate School of Theology.

The problem wasn’t the fact that Yun-Welch was legally blind. Nor was it that her health was fragile, or that she had attempted suicide three times years earlier. It was that she was a woman—and no woman had ever received a doctorate from Sahmyook University’s Graduate School of Theology.

Yun-Welch made history in February by graduating with a Doctor of Ministry degree, a milestone that she hopes will encourage other Asian women to pursue ministry-oriented doctorates that prepare them for leadership roles.

“It is my prayer that as the first woman to graduate in any doctoral area of theology at Sahmyook University, I will help open the door for more female leaders in the Adventist work in South Korea and Asia,” Yun-Welch said.

Even more important than leadership, she wants Korean women to become actively engaged in church work in a male-dominated culture that traditionally has treated women as a second class.

Yun-Welch, 49, is not seeking to become a pastor but to combine her new education with 33 years of public health experience to become more effective in sharing Jesus, particularly within the framework of the Adventist Church’s comprehensive health ministry.

The firstfruits of her trailblazing efforts are already evident. A second Doctor of Ministry candidate, a pastor’s wife, Youngsoon Kwon, is studying at Sahmyook University, and a woman is pursuing a Ph.D. in theology.

“Her accomplishment gives us, Korean Adventist women, the hope and courage to do more than we are doing now,” Kwon said.

Jong-Keun Lee, dean of the Graduate School of Theology at Sahmyook University, described Yun-Welch as an outstanding student and a dedicated Adventist. “She is one of the best graduates who have ever gone through our seminary in Korea,” said Lee, who has known Yun-Welch since teaching her as an undergraduate student in the 1980s.

Un Bae Kim, dean of the Undergraduate School of Theology and Yun-Welch’s D.Min. thesis adviser, praised his former student as diligent. “Miriam never quits once she has started a job, even when others discourage her,” he said.

Yun-Welch’s struggle to get into graduate school represents, perhaps, a microcosm of a much larger battle that she has fought her whole life. The eldest of four siblings in an Adventist pastor’s family, Yun-Welch was born blind on January 6, 1966, with cataracts in both eyes and poorly developed optic nerves and retinas. After multiple surgeries she can detect light with one eye and needs 1,400-power magnification to use it.

“All through my school years I have needed a ‘seeing-eye friend’ to sit next to me and read the teacher’s notes from the board,” she said. “The blessing in all of it is I have an excellent memory and very sharp hearing.”

The young Miriam was mercilessly teased as “four eyes” until depression drove her to attempt suicide three times. For a year and a half in public grade school, teachers beat her every Monday morning for missing Saturday classes.

At the same time, her family’s Adventist faith offered opportunities unavailable to peers. Her father, Philip Bohyun Yun, served as pastor for the church’s language institute in Korea, surrounding the family with English speakers who taught English to the children at an early age. Her father also had a keen interest in public health. He was South Korea’s first Adventist pastor to be sent abroad, to the Philippines, to obtain a master’s degree in health, and he later received two of the Seoul government’s highest civilian awards for his anti-smoking initiatives.

Yun-Welch, who worked closely with her father in his health programs from 1983, determined to follow in his footsteps and study theology when she finished high school. But her father told her she needed “a real profession” and encouraged her to take business administration instead.

Thanks to her memory skills, Yun-Welch received a full scholarship and graduated six months early from Sahmyook University. For the next six years she worked at Sahmyook University’s business office. She remained engaged in church health activities during that time, but she wanted to do more. So in 1994 she quit her job and studied massage therapy in California. She worked for two years at a health center at Asia-Pacific International University in Thailand, and later taught massage and hydrotherapy for two months in the Philippines.

The experience changed her life, she said, and she returned to South Korea in 1997 with a desire to share Jesus through the church’s health message. She married Michael Welch, an English teacher and physical therapist from the United States, in 1999, and the two went on to obtain master’s degrees in public health and other health certifications. While teaching public health at Sahmyook University for much of the past decade, the couple has led health seminars in more than a dozen countries, including the U.S., China, Mongolia, Indonesia, Italy, and Ghana.

Yun-Welch, meanwhile, suffered health problems that threatened to sideline her work. Just six months after getting married, she discovered that she had lymphangioleiomyomatosis, a fatal condition that causes “blisters” on the lungs that regularly pop and partially deflate the lungs. Doctors said the average life span after such a prognosis was three and a half years, but told her that she might live up to seven years.

Yun-Welch said she and her husband recommitted their lives to God. “We just gave it to the Lord and told Him, ‘Lord, You put us together for a special work, so You take care of me,’ ” she said. “And here I am still working for the Lord 16 years later with ‘Swiss cheese lungs.’ ”

In the late 2000s Yun-Welch had something of a revelation as she worked with her husband to start a master’s program in public health at Sahmyook University. She said she realized that she had been combining practical health skills with a theoretical knowledge of theology. She wanted to learn practical theology.

“Here I was, educated and still feeling so ignorant of the God I loved. So I decided to learn some more.”

“Here I was, educated and still feeling so ignorant of the God I loved,” she said. “So I decided to learn some more.”

She approached Sahmyook University with a request to study for a D.Min. in September 2009. She was firmly told that the graduate school accepted only men who could be hired by a church conference and work in pastoral areas as a minister for at least five years upon graduation.

Yun-Welch explained to the deans that she had worked for the church all her life and had even been hired by the Korean Union Conference as its first-ever female financial intern in 1988.

Still facing reluctance, she told them: “I am a pastor’s daughter, and I have been doing everything in the pastoral area all my life except for marrying and baptizing, plus I have years of Adventist Volunteer Service work in the mission field, something that most of your Ph.D. and D.Min. candidates do not have!”

Sahmyook University rewrote the rules for postgraduate theology students in October 2009, allowing Yun-Welch to enroll the next semester.

The Adventist Church’s Northern Asia-Pacific Division, which includes South Korea, announced Yun-Welch’s graduation with a glowing statement on its Web site. “We praise God for what He has accomplished through Miriam’s life, and wish her God’s greatest blessings as she continues to serve Him,” it said.

Her husband, Michael Welch, said he was intensely supportive of his wife and more than a little proud of her abilities to organize and lead health outreach projects. “It was a huge relief for her to graduate, and we can hardly wait to see where God has for us to go next,” he said.

Yun-Welch, who works as a professor and researcher at the university and managing director of the Korean Institute on Alcohol Problems, said her graduation is just the start. She said she hoped to see Korean laywomen become more educated and active in church outreach, because in a male-dominated culture like South Korea their self-esteem can be undermined and their willingness to work can be limited to areas where they are directed by men.

“Women are underutilized as soul winners,” she said. “I believe that in this ‘end-time setting’ we must fully utilize all the resources of the Adventist Church to carry the last message of salvation to a dying world.”