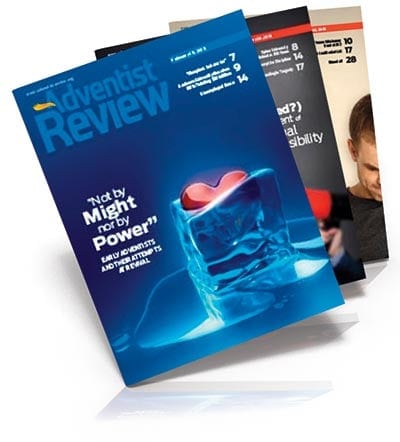 Amen, and thank you!

I appreciated Nathan Brown’s article “A (Missed?) Moment of Spiritual Possibility” (Feb. 26), which focuses on Fundamental Belief 11, Growing in Christ, and specifically mentions Ellen G. White’s wonderful book
Steps to Christ! This is the book, after the Bible, that I’ve carried with me, on all my travels, for my personal devotions. I have read it dozens of times, and done my own color marking, focusing on the love of God, the sacrifice of Jesus, and the sinner’s need of Christ. I have also put a date and place where I read it. During a crisis in one of the countries overseas it was the Bible and Steps to Christ that brought me peace and carried me through!

I was in St. Louis in 2005 when the belief was voted, and, as Brown writes, this was “the first time in the history of our church in which the transformative experience and practice of our faith was formalized in a statement of belief.” This is the book that every Adventist should read often—and also give to fellow neighbors.

I’m writing in regard to the obituary on Dolores E. Slikkers, printed in the February 26, 2015,
Adventist Review. To suggest that alcohol could have been involved in the fatal accident of Dolores Slikkers is demeaning.

The reference to alcohol had to do with the other driver, not Dolores Slikkers. Read an extended version of the article at https://adventistreview.org/church-news/dolores-e.-slikkers,-maranatha-co-founder-who-shaped-adventist-policy,-killed-in-car-crash.

What About Online Schooling?

I’m writing in regard to Robert E. Lemon’s news commentary “Threatened Closure of Adventist Academy Serves as Wake-up Call” (Feb. 19, 2015). Maybe it’s time to use it as a test for online schooling. Instead of putting money into a physical plant, how about putting funds into computers for the students and let them learn from home? With technology as it is today, let us embrace it and use our funds more economically.

Through video conferencing—Skype, for example—and other technologies, students can be educated at home and save immense amounts of funds. What a legacy we could give to our children, to graduate without so much debt.

Students can learn year-round, and graduate earlier if they desire. The cost could be reduced, and more students would be able to enjoy a Christian education. All the students in that class would show up on the screen, so each student would know who was in class. The teacher would see each student. All could discuss, just as they could sitting in a classroom.

For hands-on classes, such as auto mechanics and biology, there are virtual programs that will do the job. On the same note, I wonder if our churches should go in the same direction. Church at home through Skype.

There were inspiring stories about two different individuals with the name “Ahmed” in two successive
Reviews (Feb. 12 and 19, 2015).In the February 12 issue Keith Augustus Burton mentions that when gunmen invaded the offices of Charlie Hebdo, one of the officers killed was Ahmed Merabet, a Muslim—a man who prayed to Allah the same way the killer did. Ahmed chose a profession in which he could protect others instead of destroying them. The author then added, “In Ahmed we are reminded that all Muslims are not terrorists.” I concur whole heartily with this statement because of past experiences in my life with benevolent Muslim people.

In the February 19 issue Jill Morikone shares a moving experience that took place during a trip in Israel (see her article “Ahmed”). Ahmed, the bus driver, bought a hand-painted spoon rest for Morikone. At her surprised, questioning look he said, “It’s a gift for you.” Morikone was touched to tears (and so was I). She writes how a friendship develops between the Morikones and driver Ahmed, the father of six children.

Thank you for publishing those two eye-opening articles. Everyone should read them and be enlightened!

It occurs to me that enrollment must have increased 260 percent rather than 160 percent. Is that true?

By the way, I enjoyed the article. 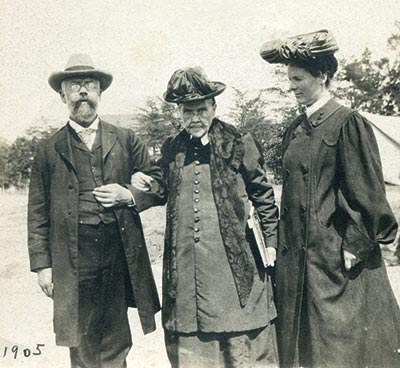 The rare photo shown on page 8 of the January 8, 2015,
Review comes to life for me with a personal story. When my grandmother was a little girl, she saw Ellen White at a camp meeting. She decided to get real close to this special woman by following her from behind (White was walking arm-in-arm with her son). She heard White say something like “Willie, slow down; I cannot walk so fast.”

My grandmother, years later, suggested that my name should be Ellen, after Ellen White.

I believe this step is especially timely considering the agenda items to be considered.

I applaud moving into the twenty-first century; and I believe that leaders who are voting on behalf of their constituents in God’s business should not be anonymous.

I had the awesome privilege of knowing the Loors while they were pastoring the Collegedale Seventh-day Adventist Church in Tennessee. To this day I cherish hearing John Loor, Sr.’s relevant sermons, as he shared many “gems” with us to help us remember what we had heard.

Way to go, Teenie! Must have been all that roller skating at SLA that helped! Blessings on your project.

We welcome your letters, noting, as always, that inclusion of a letter in this section does not imply that the ideas expressed are endorsed by either the editors of the Adventist Review or the General Conference. Short, specific, timely letters have the best chance at being published (please include your complete address and phone number—even with e-mail messages). Letters will be edited for space and clarity only. Send correspondence to Letters to the Editor, Adventist Review, 12501 Old Columbia Pike, Silver Spring, MD 20904-6600; Internet: [email protected]

Letters
Inbox
Who Cares | Inspiring Issue | God Has Called You to Be the Bible to Non-Christians | Indianapolis Will Host 2030 General Conference Session
News
Center for Adventist-Muslim Relations Will Open in Thailand
Chapter will become part of the church’s global network of bridge-building initiatives.