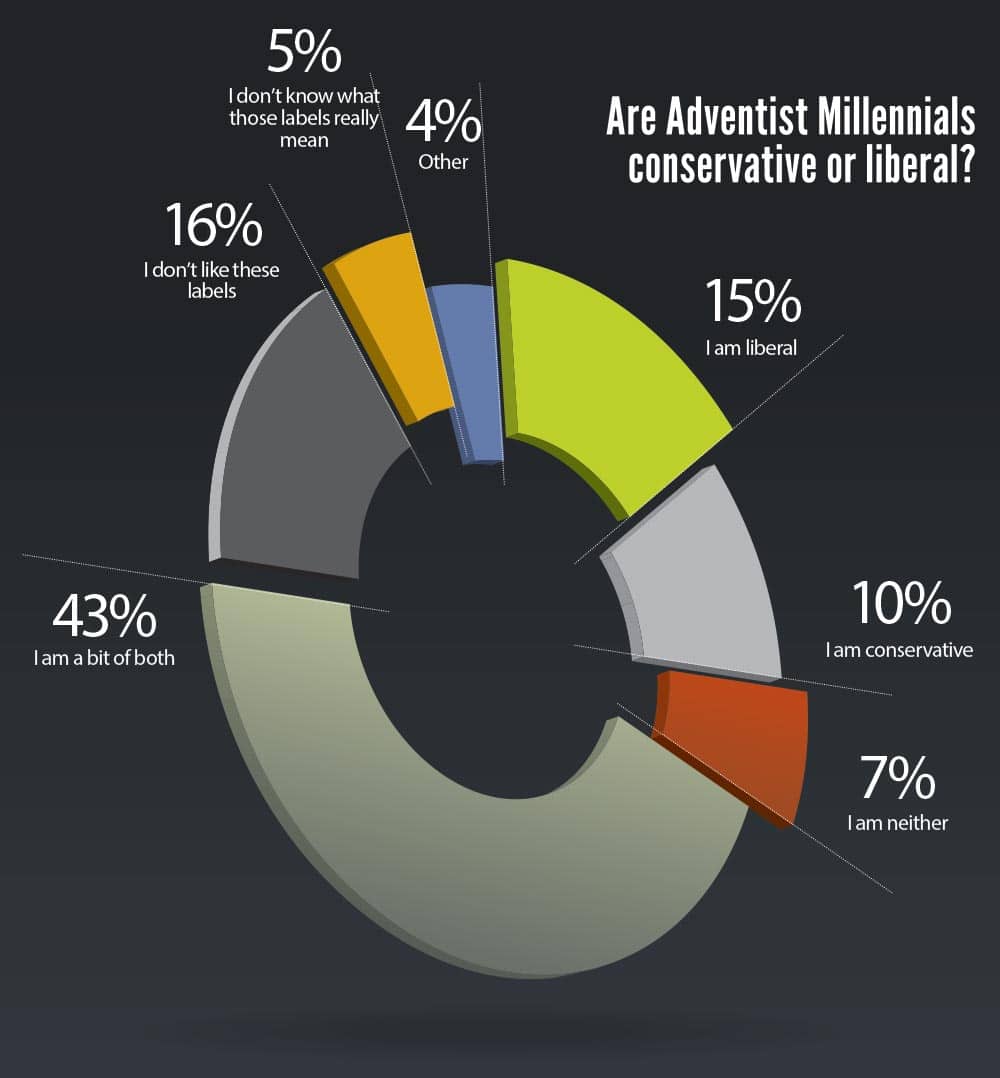 Have you ever wondered what Adventist Millennials (youth 18-32 years old) think of their church’s 28 Fundamental Beliefs? Do they even know what they are? Do they think they are important or relevant?

And why are many still slowly drifting out of their churches despite enormous expenditure and research by the Seventh-day Adventist Church to retain them?

A new study entitled
Beyond Beliefs [www.beyond-beliefs.com], involving Andrews University undergraduates, has generated more than 5,000 pages of qualitative responses that help us answer many of these questions. Its pages describe what Millennials like/dislike about every one of the Fundamentals, if they think they are important or not, and if they feel they are even relevant.

Additionally, more than 679 participants have completed the
Beyond Beliefs survey, whose data relates to more than 90 social, behavioral, and religious topics ranging from beliefs about hell to nepotism in church hiring practices. Undertaken by the Religion Department at Andrews University and ClergyEd.com, the study identifies not only how these young adults feel about every single Fundamental, but also what works and what should be emphasized in relation to each belief; also, how teachings may be clarified, and how each Fundamental may be shown to be more relevant to Adventist young adults.

In Their Own Words

Paul Petersen is one of the researchers for the
Beyond Beliefs study. He comments: “It was interesting that most of our sample of 679 participants had a very limited knowledge of the beliefs of their church, despite being baptized members [see Figure 1]. However, when these beliefs were presented by a trained exegete rather than a minister, in the context of an interactive general education class that met competency-based learning protocols, there was a significant shift in students’ knowledge base of the Fundamentals [see Figure 2]. Numbers of those who believed they knew ‘quite a lot’ and ‘most of’ the Fundamentals rose from 20 percent of the class to 86 percent. The ‘I know nothing’ category disappears altogether.” 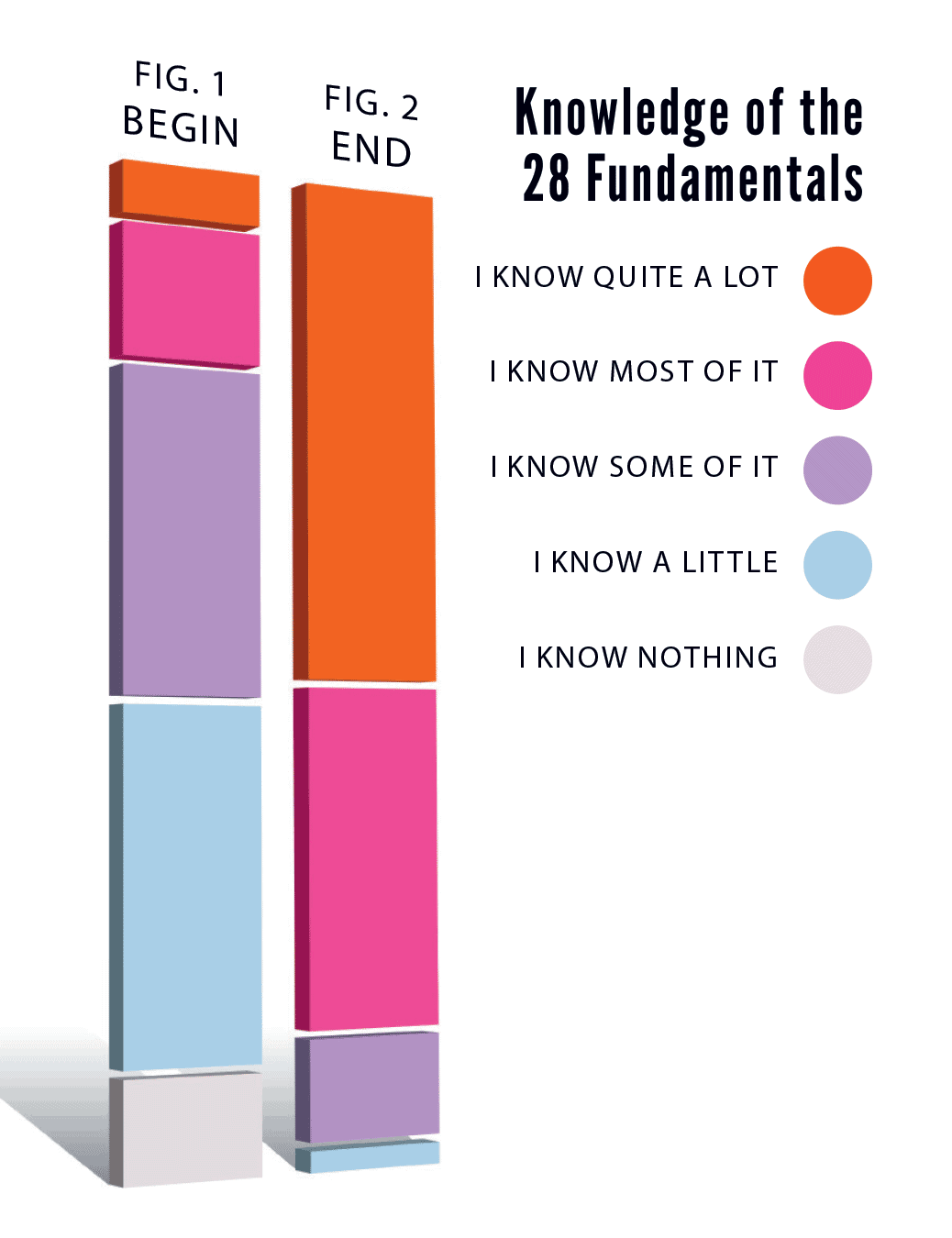 Leanne Sigvartsen created the
Beyond Beliefs surveys and data collection tools. She reports that “young adults, overall, are very favorable toward the beliefs when they know what they are, especially those that offer them some personal benefit.

“For example, the most noteworthy positive theme that resonated with young adults with regard to the Fundamentals was the Sabbath being a day of rest. However, they contextualized this by saying it was a guilt-free day when they may avoid chores, work, and study. It would seem the Seventh-day Adventist Church may not have to convince young adults of the merits of its denominational beliefs, but rather associate these beliefs with plausible personal benefits relevant to this age group.”

“Young adults are an educated group of people who are legal adults. They are not teenagers or children,” says Sigvartsen. “They can spot hypocrisy, agendas, as well as inconsistent and poorly thought out hypotheses, very quickly. They have been exposed to a range of worldviews, life experiences, and ways of looking at issues through higher education and the information age that are outside their own, their families’, and their community’s experiences and generally held beliefs. They are also fairly skilled in the process referred to as ‘critical thought’ and thus are very capable of assessing information based on its merit rather than indiscriminately believing everything they are told.”

According to researcher Jan Sigvartsen: “What young adults expressed disapproval of in relation to the Fundamentals was not so much the Fundamentals themselves, but rather how they were presented or explained to them.” Jan, who is the third researcher associated with the
Beyond Beliefs study, developed the competency-based learning curriculum for a university general education class that effectively teaches young adults the f\Fundamentals, maximizes learning and retention of the 28 beliefs, while still meeting secular accreditation requirements.

If Jesus came back today, would I be saved?

“There was a distinct aversion to didactic preaching methods where they were ‘told’ what to believe, often with questionable illustrations or explanations for beliefs. Millennial young adults also felt that they did not really have a voice in their church and were often treated like they were still uninformed children by many leaders and older adults. They did not like that youth ministry programming had a strong emphasis on one person, usually an older person, doing all the talking to a largely passive audience, with no real opportunity to discuss, respond, or disagree with what was being presented.”

Interestingly, only 6 percent of participants identified youth pastors as persons who influence them spiritually. Millennial young adult parti- cipants identified their mothers (46.5 percent) as being the most spiritually influential person in their lives, followed by their fathers (36 percent).

Mothers (80.6 percent) and fathers (60.3 percent) were identified as even more spiritually influential when a young adult was growing up. Also, when they were growing up, grandparents (28 percent) were identified as the third most influential people, followed by friends (23.5 percent), and academic teachers and church pastors (23.1 percent each). Youth pastors scored 20 percent while they were growing up, and Sabbath school teachers 15.1 percent.

Given this finding, one has to wonder why youth programming seems to want to separate teens and young adults from their parents, the most spiritually influential people in their lives, and place them with youth pastors, whom young adults perceive as having much less influence on their spiritual lives.

And when mothers are identified as the most influential person spiritually to young people, it may be time to consider making them the spiritual leaders of families, or sharing this task between parents as their family’s needs require.

The
Religious Verbal Fluidity Project*identified that many fathers in the Western world already feel overloaded and exhausted with responsibilities, such as working long hours to earn a living to ensure the financial security of the family. “The responsibility of being the spiritual leader on top of all the other expectations placed on fathers may not be appropriate or even fair in a modern globalized world,” says Leanne Sigvartsen. 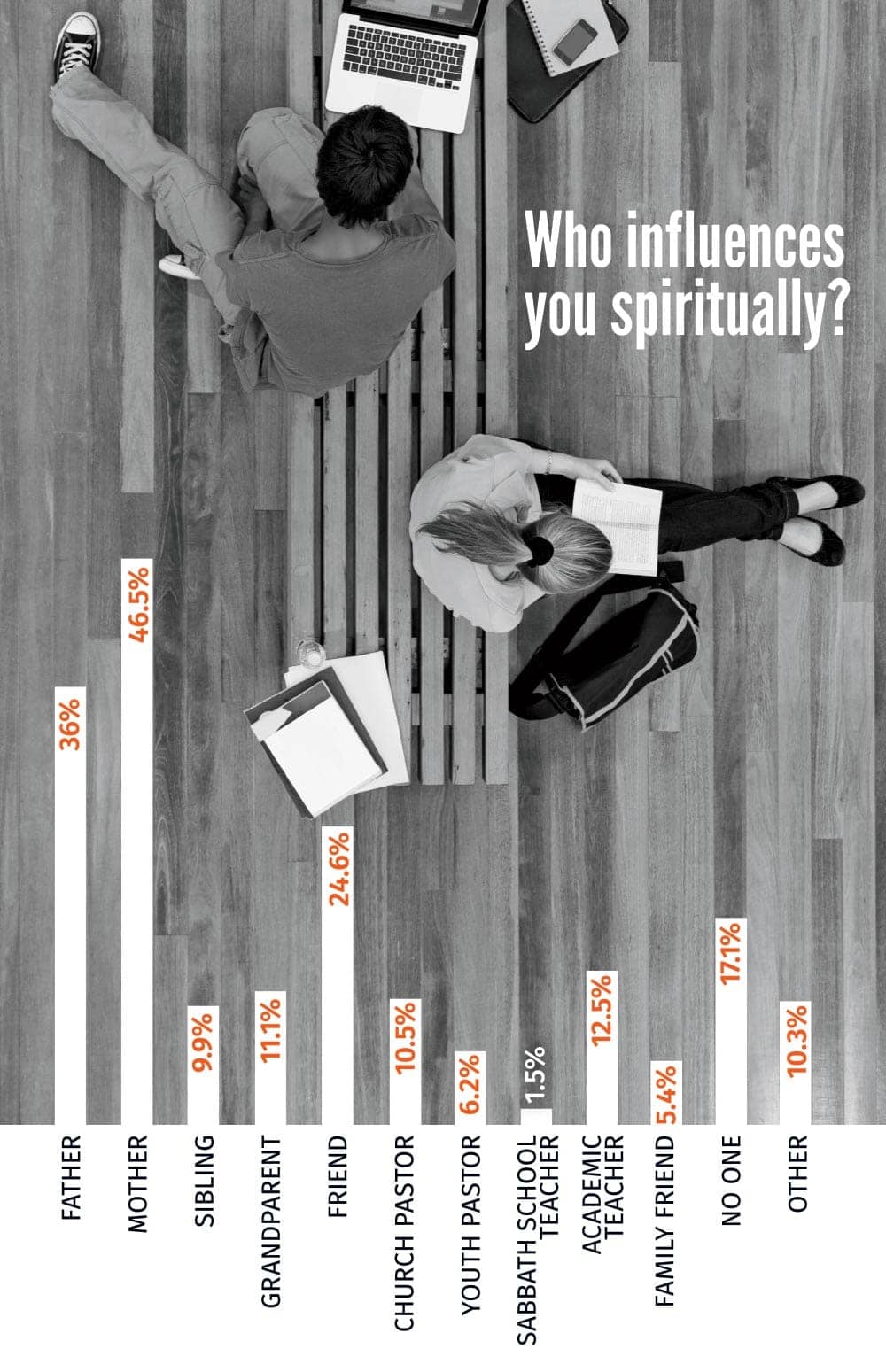 Another group identified as influential to young adults was their peer group (24.6 percent). “Peer ministry is a largely untapped resource. When the majority of ministers in North America either belong to the Silent Generation (born 1928-1945) or the Baby Boomer Generation (born 1946-1964), it is little wonder that church membership consists of predominantly Baby Boomer and Silent Generation members. I guess peer ministry works,” says Jan Sigvartsen.

The primary outcome of the
Beyond Beliefs study has been to develop a free online commentary for the 28 beliefs that is largely written by young adults, for young adults, and is reviewed by the Religion and Biblical Languages Department at Andrews University. Additional outcomes include a new textbook and a free curriculum that includes multimedia teaching aids for teaching the 28 beliefs.

As these outcomes near completion, researchers are in the planning stages of replicating their informative study in most of the world divisions of the Adventist Church.

How do they assess the ultimate success of their research? In numbers of response pages generated? In data accumulated? In characteristics identified? Hardly so, however worthwhile these may be. The primary purpose of such research is finding ways to ground Adventist youth in saving truth. And to win Millennial young adults to passionate service for Jesus. That’s much more to the point.