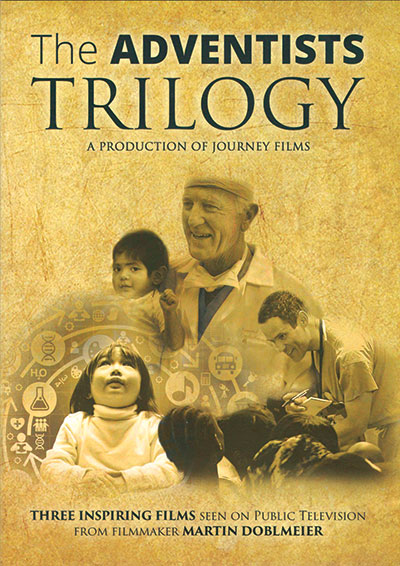 Several years ago a friendship with an Adventist couple led filmmaker Martin Doblmeier to visit Loma Linda University. While there he began hearing stories about the university, its medical school, and how Adventists in general are among the healthiest populations on the planet.

The result of that introduction led to this three-DVD series: The Adventists, The Adventists 2, and The Blueprint. Doblmeier may have done more to raise the profile of Seventh-day Adventists in North America than any single individual over the past four years, since each of these films has been broadcast on Public Broadcasting Service (PBS).

Doblemier, an award-winning filmmaker and consummate storyteller, has zeroed in on two of Adventism’s most lasting and profound legacies: health and education. The first DVD in this series, The Adventists, focuses primarily on those who live near Loma Linda, California, and highlights, among others, Leonard Bailey, pioneer pediatric heart transplant surgeon, and Ellsworth Wareham, a cardiac surgeon who, in 2010, was still functioning as an attending physician for open heart surgeries at the age of 95.

In the second DVD, The Adventists 2, Doblmeier focuses on the wider health ministry of the church: its hospitals, clinics, and medical services to people and places in many parts of the world, some not easily accessible by conventional modes of transportation. The emphasis is not just health, but service, since in many of the settings Adventists are the only ones providing such medical care.

The final and most recent DVD, The Blueprint, tells the story of Adventist K-12 education, and highlights its guiding principles, whether in schools large or small, whether they’re located in cities or on Native American reservations. The underlying philosophy is all the same: to serve students as a whole—mind, body, and spirit—by remembering a Creator who has designs on their past, present, and future.

Each DVD is an example of documentary filmmaking at its best, which is not surprising given that Doblmeier and Journey Films have won many awards over more than 30 years for documentaries about a variety of religious individuals and communities.

In a society in which Adventists are constantly looking for ways to raise their profile and share their ideals with others, The Adventists Trilogy is a valuable tool. In addition to reinforcing our commitment to health, education, and service, these DVDs offer a creative way to share our principles with those who inquire about what it means to be a Seventh-day Adventist.

It’s not hard to imagine chapters of these DVDs being shown during segments of evangelistic meetings, or at small group Bible studies. Robert Burns, the poet, wrote: “O would some power the gift to give us, to see ourselves as others see us,” Martin Doblmeier has given us that gift.

The Adventists Trilogy is available from JourneyFilms.com.