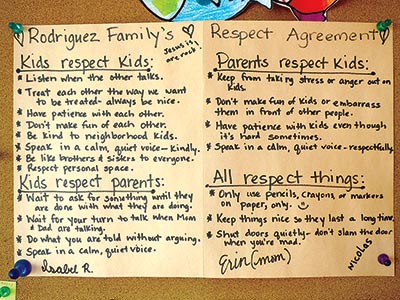 Almost every week my incoming mail includes an advertisement for some product designed to organize my garage, office, closet, or some other room in my house. The implied promise is that I’ll be more productive and live better if I and my things are better organized. The January 2015 Better Homes and Gardens magazine cover caught my eye with an article, “Beautifully Organized: Tips and Tricks for Every Room.” The need to keep “stuff” organized for better living is always with us—especially in light of the human tendency to accumulate.

But my life has been more involved with people than with things. Do people need to be organized too? How would you organize a group of youngsters into a fully functioning, learning community? How would you organize a group of people into a smoothly operating worship community, or any other organization or club? What about a city or nation: do they need to be organized? A popular question a few years ago was “What would Jesus do?” It’s an excellent concept for dealing with people. And when it comes to organizing people, He has given us a terrific example!

Can you imagine a million or two recently freed slaves who are unaccustomed to self-government trying to make their way through the desert to the land of their dreams, the land promised to their ancestors for centuries? Where would you begin to organize this crowd into a nation? How would you help them enjoy their freedom? How would you protect them from chaos and self-destruction? The pattern for the Jewish nation was established while they were at the foot of Mount Sinai. Interestingly, one of the first things the Lord taught these freed slaves was how they were to treat their slaves in the future (see Ex. 21)!

The Lord foresaw and addressed a wide variety of situations before they surfaced, and gave Israel directions on how to handle them. There were also times He waited until an event suggested the need for law. He even had to give them instruction on personal hygiene: apparently they did not know some basic principles, and out of care for their well-being, the Lord instructed them (Deut. 23:12, 13), and gave them a rationale for His guidelines (verse 14). During their stay at Sinai they were also given guidance on how to set up camp—Judah on the east side of the sanctuary, Reuben on the south, etc. (Num. 2).

When Israel left Sinai, they had instruction—policies, or laws—organizing their encampments, guidelines for sanitation and health, laws on how to function as a nation, a systematized approach to their worship practices, even an outline for passing on their property to their children: five different categories of law, all based on the foundation for all law, the transcript of God’s character we know as the Decalogue, or Ten Commandments. They were a well-organized nation ready to conquer and settle in the Promised Land. The God who directs His church to do everything “decently and in order” (1 Cor. 14:40, NKJV)1 modeled that in Israel. We cannot escape the realization that our Lord loves order!

Schoolteachers quickly discover that outlining a structure for their classrooms keeps youngsters better focused on their lessons and enables them to learn better. Frequently classroom rules are posted on the wall for everyone to see. Well-defined groups and clubs have rules, guidelines, or policies that dictate their function. Cities and nations establish laws to prescribe and proscribe citizen behavior. Even families function best when the rules are understood and followed consistently by all family members. My daughter is teaching her children the value of rules, and how they help people avoid conflicts. The family entered into a “Respect Agreement” that they posted in a prominent place in their home. She credits the book Discipline That Restores, by Ron and Roxanne Claassen, for the idea.2

What Are Rules For?

As a young pastor I was asked to represent our church to the Montana legislature and watch for legislation that may infringe on our freedom to practice our faith as conscience would dictate. As I sat in the gallery listening to the introduction and debate of new legislation, I realized that most legislation was introduced to address a particular circumstance. Often that circumstance dealt with conflicts among people. The legislature believed that a general law would help others who faced the same circumstance.

Several years later I was invited to participate in church administration and came face to face with the concept of church legislation and law, what we know as working policy. When issues would be discussed among administrators, someone would ask, “What is the policy?” I soon had opportunities to watch policy be written and revised. Almost always policy was established to deal with a situation that had arisen someplace in the church. Revisions would be made as time and experience indicated a different approach would prove to be more beneficial to all parties.

Even though there were times policy seemed to be too confining, almost always it was a relief to know that the circumstance or issue confronting us had been faced—and addressed—by someone else at another time and place. Like the guidelines, policies, and laws given to Israel, church policy often resolved conflict before it started, and saved many headaches.

Still, you may ask, “Do we really need church policy? Can’t we just function as brothers and sisters without the complications and restrictions suggested by a book more than an inch thick?”

I started ministry as a pastor of small churches, always grouped in a district of two, three, or several more congregations. Church life was pretty simple. Eventually I was invited to pastor a single, larger congregation. I well remember the board discussing an upcoming wedding. Someone asked if it fit the church’s wedding policy! I was dumbfounded, though I didn’t admit it. A “wedding policy”? I never needed such a thing in the small churches I had pastored! But it became obvious that guidelines for the use of the church, the choice of music, the use and operation of the sound system, actually were a benefit to the bride’s planning!

How We Make Our Rules

A global church such as ours will need policies that properly relate to their local circumstances. Thus conferences, union conferences, and denominational institutions all have policies that are adopted by their respective executive committees and/or governing boards. These policies will be both specific to local needs and developed in harmony with the General Conference Working Policy and that of the division of the General Conference operating in their geographic territory. Like the conference, union conference, and institutional policies, General Conference/division policies are adopted by their respective executive committees.

“The church is God’s appointed agency for the salvation of men. It was organized for service, and its mission is to carry the gospel to the world.”5 The gospel is God’s good news on saving people. Everything the church does properly, legitimately, and well will be oriented toward saving people. Even in a church well acquainted with policy, policy must never be more important than people. The Godhead illustrates this principle best of all. Policy was clear: If you eat from the tree of the knowledge of good and evil, you will die. If you sin, you die (Gen. 2:17; Rom. 6:23). Can’t you just hear the discussion after Adam and Eve disobeyed? “We cannot just let them die! What will become of their children? We cannot just let them die, either!” The divine character of love and grace wrestled against “the broken law of God [that] demanded the life of the sinner. In all the universe there was but one who could, in behalf of [humanity], satisfy its claims.”6 It was in this context that Jesus, the Creator, Lawgiver, Policymaker par excellence, volunteered, “I will die in their place.” The policy held firm, sin resulted in death, but by becoming the substitute, Jesus took care of His people.

As delegates from all around our planet gather for the General Conference session in San Antonio in July, structure and policy will be on prominent display. But in addition, it will also be clear that organization afforded by policy has been effective in enabling our church to uplift Jesus and go to every kindred, tongue, and people with the story of His care for the people He created!