Charles Lillie traced a band of pale clouds across the summer sky. The 24-year-old’s characteristically brisk step poorly reflected the uncertainty in his heart as he grappled with the nagging question: Will my boss give me Saturdays off?

In 1907 Saturday was an excellent business day for shops in Springfield, Massachusetts. From his position on the busy street, the young man could already envision chattering shoppers making the small bell at the top of the shop door constantly ring. With heavy heart he opened the shop door and tied on his work apron. It would be a long day.

Ever since evangelist F. W. Stray presented the compelling evangelistic series in town, Charles was intrigued by the material and impressed by the clarity of its presentation. The tall grocery store employee hastily scribbled notes of each presentation, then carefully compared them with Scripture in the privacy of his own room. His heart eagerly grasped at the truths he found, and one of them was the truth about the Sabbath. He doubted that his boss would understand this new conviction and allow him to take the day off. He was a bachelor living off of his income working at the grocery store. What if he found no new employment?

Charles’s heart grew heavy as he grappled with the potential cost of remaining true to his convictions. As the sun began to set on the horizon, he could ignore the Holy Spirit no longer. He promised the Lord he would never miss keeping the seventh day holy again. Charles was promptly fired.

Hearing of Charles’s plight, Elder Stray invited him to be tentmaster1 at another Adventist event: camp meeting.

Arriving early to set up the tents, Charles soon became acquainted with the organist for the meetings, a petite and pretty musician named Catherine Philbrick. Nicknamed Kitty, she too had been introduced to the Adventist message through evangelistic meetings. Charles was baptized at camp meeting and developed a dream to become a full-time evangelist. His incomplete high school education could not dampen this zeal as he wrote to Washington Foreign Missionary Seminary after much prayer and consideration.2

Cradling a chubby baby in one arm and a suitcase in the other, Charles stepped down from a train platform in Takoma Park, Maryland, several months later. Turning to Kitty, his face wreathed with smiles, he remarked, “This is the happiest day of my life!”

FAITHFUL PARTNER: Catherine Philbrick, age 17, married Charles and served with him in China. The couple had five children, four of them born in China." class="img-right" style="float: right;">

The young couple gained valuable experience during this single year of Adventist education. Charles was placed in a group of potential foreign missionaries to study the culture and language of India. But when the committee learned of his burden for China, they promptly changed his class.

The 1911 school year drew to a close. On May 2 an invitation to full-time service as a missionary in China arrived in the mail. Charles’s immediate response was yes.

Charles, Kitty, and their daughter, Elizabeth, traveled by train from Connecticut to San Francisco, where they boarded a ship bound for an unfamiliar country far from their native New England. On the voyage Charles discovered a handbook about China and pored through its pages during their three-week journey aboard the Chio Maru.

The ship landed in Shanghai, where the Lillies were welcomed into the home of a cordial and seasoned missionary. Charles wasted no time learning the language. Following an authentic Chinese meal, he pointed to food items as the Chinese cook warbled replies in her native tongue.

A boat trip up the Yangtze River brought the family 2,000 miles to Changsha, their first mission assignment.3 The mission compound was comprised of two houses built with Sabbath school mission offerings. The young family found the work in their area already well organized.

However, Charles became no stranger to scorn, ridicule, and threats. One day his family was forced to run when villagers chased them out of the area, clutching sticks and taunting the “foreign devil” and “foreign dog.”

At this first mission station Charles’s responsibility was to visit the training school for workers and oversee the work accomplished in other outpost missions scattered throughout the area. Pressing duties often drew him away from home for two or three weeks at a time. He visited Adventist churches, encouraging members, answering inquiries, baptizing new converts, and holding services.

Adjusting to a foreign way of life and new culture required acceptance and determination. Sun helmets protected tender skin from the sun’s harsh rays. Drinking water had to be boiled for at least 10 minutes before it was safe to use. Foreign to the Lillies’ concept of a household, Chinese culture expected missionaries to have hired servants. Every morning Chinese women could be spotted along the roadside, gathering twigs for a fire to cook their morning rice. Charles often passed village shrines, tablets, and small groves where incense was burned and Buddha was worshipped. Transportation was by means of sedan chair, boat, rickshaw, and wheelbarrow. Charles did not feel comfortable being carried by a fellow human being. Because he refused to be carried by someone equal to himself, he often walked, sometimes 40 miles a day.

Every Sabbath, believers crossed the river for church and Sabbath school. Memory verse cards and Picture Rolls, sent from churches in the United States, were used every week.

“We were impressed to hear the Chinese pray,” Kitty later reflected. “They were happy to remember that our Father in heaven understood their language as well as ours.” While Kitty struggled with language learning, Charles eventually became so fluent in Mandarin and several other dialects that Chinese could detect no accent.

The natives graciously listened during his first attempt to preach without a translator. As Charles endeavored to master the language, he once proclaimed with conviction that the Lord was coming “in a vegetable garden.” The charitable listeners concealed any trace of amusement until the service was over.

In 1915 a Chinese peasant’s yearly income was US$25. They often placed in Charles’s hands small offerings out of gratitude and a desire to support God’s work. One elderly woman, who barely had enough to eat herself, handed the missionary a handkerchief full of eggs. “Such gifts are almost too sacred to use,” Charles said.

An oxcart creaked, laden with Chinese Signs of the Times. Traveling throughout the Shanxi province, Charles walked beside it, selling the truth-filled literature to curious villagers along the way.

Nearing the crest of a hill, he stopped the weary oxen for a rest. As he lay on his stomach just underneath the ridge of the hill, his gaze swept the skyline, and prayers came from his lips. Suddenly Charles was startled by a snake as thick as his arm just a few inches away. He dared not move a muscle as the reptile stopped short and their eyes locked in one lengthy moment. Finally the huge snake backed off, slinking out of sight.

Traveling 10 to 30 miles a day on foot was a weary but rewarding journey for the missionary. They eventually reached the Great Wall of China. Passersby hesitated with wonder and curiosity, reading the message written in bold, hand-painted characters on the cart: “He that hath the Son hath life.” Through his fluency in the language and the slogan on his cart, hundreds were exposed to words of truth.

Charles and Kitty valued Adventist education. Charles became president of a mission compound stationed in Hankou
4 that provided a church school consisting of six students for the two eldest Lillie children to attend. Wide cement steps shaded by a palm tree on either side led up to the brick building serving as their home and office. Bordered by the Yangtze River and surrounded by a 10-foot picket fence, the mission station was only three miles from the modern-day city of Wuhan.

A small village lay a few hundred yards away, with structures comprised of mud and straw for houses, connected with courtyards in between. Chickens and ducks wandered freely through the huts; a chunky pig was often tied to a stake in the front yard. The brave young mission elementary school teacher often had to carry a stick to beat back dogs when she and the children took walks outside the compound. 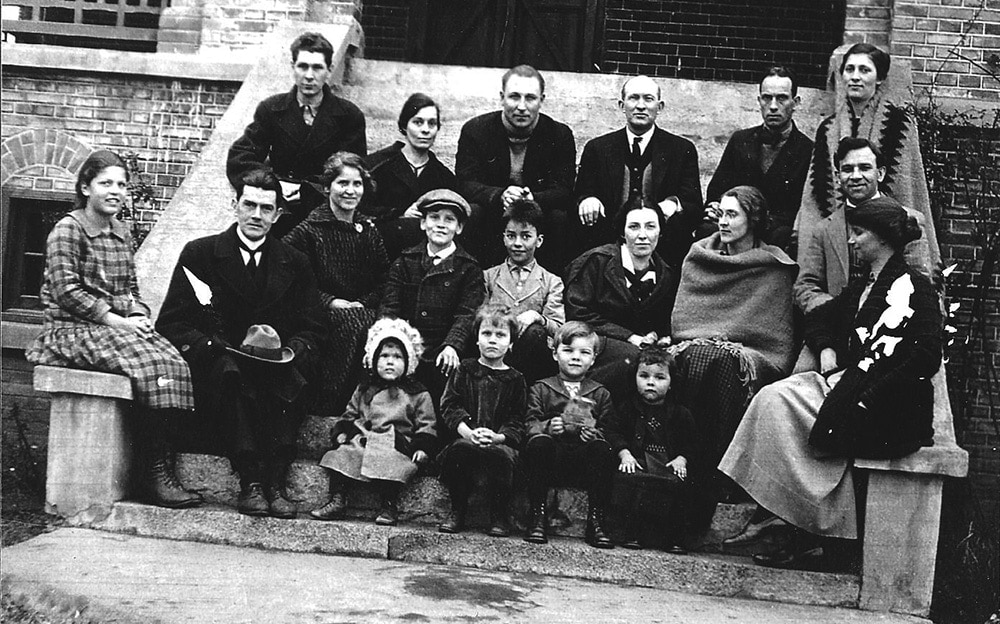 TEAM MISSION: Charles Lillie (front row, hat on knees), mission director, poses with other members of the team. Kitty is on his left with four of their children.">

It was an unsettled time in China. Although aware of personal danger to himself, Charles trusted God to provide strength for each day and carried on with his work.

However, alert to the unrest, the local magistrate assigned a man to guard the missionary as he traveled from village to village. When a tall man approached him for duty with a knife sheath at his thigh boasting a two-foot-long blade, Charles attempted to hide his concern. The man became Charles’s silent shadow, following in the missionary’s steps as he journeyed from one village to the next.

Often homes were crowded with people, and the only place left to sleep was the funeral room. When a family member passed away, the corpse (in a coffin) was placed in a special room for up to six months before burial. After a day of sharing the gospel, the missionary was thankful for a place to spend the night, especially when a member of the family hadn’t recently died.

When Chinese converted to Christianity and desired baptism, Charles asked for their idols (including Buddha) and opium pipes. Baptisms often attracted a throng of curious spectators. “After the usual hymn and prayer, I stepped into the water,” Charles recounted to Kitty upon returning home to the mission station. “As I did so, a shout of derision went up from the crowd. But as the candidates followed one by one and were buried in baptism, a hush came over those assembled.” As those jeering observed Charles raise his hand for the baptismal benediction, their scorn melted into the soft breeze as they watched with awe and bewilderment. A feeble, aged man entered the water courageously, his eyes gleaming with joy, his step shaky yet determined. As Charles lifted him out of the water, the new believer shouted, “Alleluia, alleluia!”

The missionary struggled to complete his fourteenth year of service in China, fighting tuberculosis and rapidly declining health that eventually forced him to take a medical retirement. Absent on another journey from home, he wrote to his wife, “Dear Kitty, my fingers are getting pretty stiff from the cold. Must stop and warm them in some way.” Then he added, “My body is cold, but my heart is warm.”

“Others arrived to go on with the wonderful work of [bringing] the Chinese people [to Jesus],” Kitty wrote in an account of their work in China. “It was a great privilege to be able to have a part in pioneering the great Advent message.”

Charles and Kitty Lillie were pioneer missionaries in the truest sense. Four of their children were born in China. Countless lives were blessed with new truth, and training schools for Chinese youth prepared young people to become ministers, then leaders.

On Charles’s shoulders eventually rested the responsibility of directing missionary work in Hunan province. Yet this devoted man never boasted of the toil, hardship, dedication, and accomplishment that marked his years in China. His life was a testimony to the power of God that transformed a grocery store clerk who didn’t finish high school into one of the first Seventh-day Adventist missionaries in China.