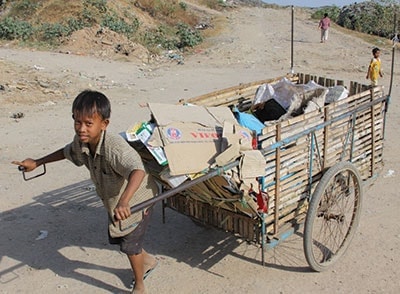 I climb carefully off the back of a motorcycle, aware almost instantly of the smells and sights that can be found only in a slum. Shy barefoot children with poor-fitting clothes emerge from behind doors of rusty iron, plastic sheet, and cardboard, faces lined with hardship and constant hunger. The stench of open sewage draining across the pathway that my motorcycle driver has precariously negotiated makes me so conscious that I am in one of the poorest places on earth—a dumpsite slum in Phnom Penh, Cambodia.

Standing in piles of rubbish between the debris of garbage and human waste, I take a few moments to absorb the chaos that seems normal here. The quickly gathering children, mostly orphans and street dwellers, are forced to scavenge as they eke out a scant living each day. Caught between the narrow choices of poverty and survival instincts, these kids start work at midnight. Without shoes and in all weather, they walk nightly the many miles to the city center to carry away cardboard and other recyclables that they can process. If fortunate, they will make enough money to buy some poor-quality rice to fend off starvation.

This scene unfolded nine years ago, but not much has changed for children that face such daily grind and hardship. Working in the charity sector for International Children’s Care Australia for the past 15 years, I’ve been daily reminded of the absolute truth—the gap between the “haves” and the “have nots” is getting wider. I’m talking about the rising number of people living in extreme poverty—those who live on less than $1 per day. Their extreme poverty in many cases drives them to early and untimely deaths as they succumb to preventable diseases such as cholera, or the consequences of war and human trafficking.

YOUNG ENTREPRENEUR: Children collect and haul away cardboard and other recyclables three miles through the night, arriving at a “cash for scrap” center in the morning, where they’re reimbursed a pittance for their labors." class="img-right" style="float: right;">

Growing up in a farming community in the United Kingdom, I had all I needed without any inclination to go to college, get a degree, and change the world. I simply wanted to work and make money—to thrive in a world that left me self-absorbed in my headlong rush to attain “things” promising happiness, security, and prestige. Isn’t it funny how God likes to destabilize us!

An interesting discovery in my 20s helped me find a heavenly Savior—a friend and brother who challenged me with some of life’s perplexing questions. As my Christian experience matured, I grew restless with the same old same old. I’m ambitious, and I hungered for opportunities not just to share the Word, but to really share all that I had—me! Over time “me” became “we,” and together my wife, Esther, and I have discovered the joy in living by a simple creed: “Share our blessings with those around us.” This is neither new nor remarkable. Jesus once illustrated this point with a story about a Samaritan that epitomized service for others. His parable was such an affront to those listening that they couldn’t even utter the name “Samaritan” when asked to point out “Who is your neighbor?”

Reflecting Love by Being Love

Once again in the same stinking slum on a recent trip to Cambodia, we visit with Mr. NuPic. He and his wife suffered the loss of their little girl a few years earlier. Stricken by grief, they struggled to move beyond their daily pain. No one can understate the loss of a child, nor could this Christian couple move past their pain. Many times they felt angry toward a God of love.

One evening while out taking a walk, they met a little girl—dirty, homeless, and afraid. NuPic and his wife reached out for this chance to bring love to a child who had lost her family. Could this be a child from God? Soon other children joined the family. Their small home, nearly empty of possessions, transformed each night as 19 freshly bathed orphans and street dwellers squeezed into a room built for just four or five. Fresh food and rice were served each day as NuPic shared his daily bread—no matter how little he had—with ravenous appetites. 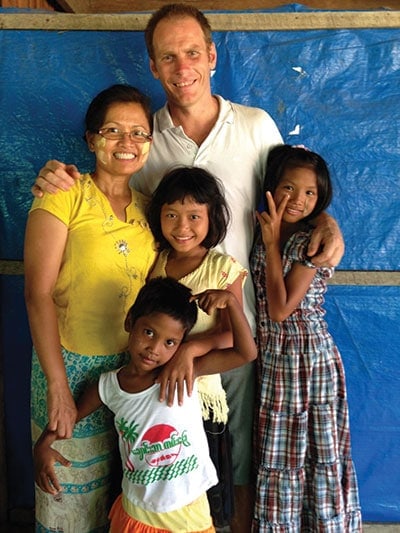 SERVING GOD'S KIDS: The author and his wife, Esther, enjoy the company of some beautiful children who now have the security of a loving home, and faith in a God they can trust in Children’s Village, Myanmar." class="img-left" style="float: left;">Relying only on prayer and providence in a mighty God, NuPic has discovered over the years God’s timely provision for the daily needs of the children he and his wife are so heavily invested in. “I just ask God for everything, David: what else can I do? I have nothing here to offer the children, but God knows their needs,” he tells Esther and me.

How the question of Jesus echoes through the centuries: “Who is my neighbor?” In a politically amoral and corrupt world that distorts truth, or when vested interest pushes for “more neighborly help to those only with the right skin color and ethnicity,” how does a disciple of Jesus respond?

There is a Desire who lives within: His Spirit pushes through the sinew and muscle, causing us to put a shoulder to the wheel—to lift, release, and emancipate the one languishing in extreme poverty. When you stare at desperation, the numb face of human trafficking, the distended belly of hunger, or the tears of a crippled mother, does the Desire of Ages call you, too?

Ellen G. White penned a call to action when she profoundly made this call: “The greatest want of the world is the want of men—men who will not be bought or sold, men who in their inmost souls are true and honest, men who do not fear to call sin by its right name, men whose conscience is as true to duty as the needle to the pole, men who will stand for the right though the heavens fall.”*

So for Esther and me, slums have become part of our home. We pray that God will continually use us to His glory as we can bless others—our neighbors as we make life’s journey. We invite you to join us—yes, in a slum, if, in fact, that is where God is calling you.

To learn more about the work of ICC Australia and what you can do to get involved, go to: www.iccaustralia.org.au.