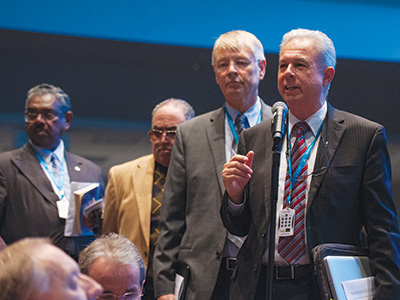 Annual Council delegates agreed to ask the General Conference session next year whether each division may decide for itself whether to ordain women, and many expressed hope that a final decision on the matter will allow the church to focus more fully on its mission of proclaiming Jesus’ soon coming.

After six hours of presentations and discussion, the delegates of the Annual Council, a major church business meeting, overwhelmingly approved a request to put a question on the matter before the 2015 General Conference session. If approved, the action would authorize each of the 13 divisions of the Seventh-day Adventist Church to ordain women in its territory if it desired.

The delegates endorsed the request and an accompanying three-page statement—both drafted by General Conference and division leaders—in a 243-44 vote, with three abstentions.

The question that will be posed to the delegates at the General Conference session next July is: “After your prayerful study on ordination from the Bible, the writings of Ellen G. White, and the reports of the study commissions; and after your careful consideration of what is best for the church and the fulfillment of its mission, is it acceptable for division executive committees, as they may deem it appropriate in their territories, to make provision for the ordination of women to the gospel ministry? Yes or No.”

Calls for a “Fix” and Unity

For the discussion, which started after lunch, delegates were urged to focus on the matter of the request itself rather than the larger issue of ordaining women to ministry. Forty-one delegates took turns speaking at four microphones placed in the aisles of the main auditorium of the world church headquarters in Silver Spring, Maryland. Many supported the motion, and a few took the opportunity to voice their stance on women’s ordination.

Several delegates expressed disappointment that women’s ordination, which was considered in several forms but turned down at two General Conference sessions in 1990 and 1995, had returned to the forefront. They said that spending more time on the issue risked diverting attention from the church’s main mission.

G. T. Ng, executive secretary of the General Conference, took to the floor late in the afternoon to say that in the past 24 hours, including the time while church leaders had been discussing ordination, 360,000 babies had been born and 151,600 people had died around the world.

“What are we doing about them?” he said. “That is why we must get over our fixation with this issue and get on with the mission of the church.”

Ryan, former director for the church’s Global Mission and a longtime missionary in Asia, frowned when some delegates applauded, and said he shouldn’t comment on Ng’s call for mission. But he added: “I know that we all have that as our primary burden.”

Paulsen, 79, who served as General Conference president from 1999 to 2010, drew sustained applause with a passionate appeal for a decision about women’s ordination. Expressing regret that he had never tackled the issue as president, he warned that the church faced “irreparable damage” if the question was not settled at the General Conference session, which will be held in San Antonio, Texas.

“We don’t have time beyond San Antonio, so please fix this one,” Paulsen said.

Ryan allowed the clapping to continue for a short time before gently reproving the crowd. Ryan said the injection of emotion into the discussion could encourage other people to respond more passionately. “Listen to the statements without a personal expression,” he said.

Ron Halvorsen, Jr., president of the church’s Ohio Conference, urged church leaders to do whatever possible to restrain the emotional rhetoric sometimes clouding the discussion. He suggested that heated language from hard-line elements on both sides of the issue was hurting the church.

Guillermo Biaggi, president of the Euro-Asia Division, which includes many of the former Soviet republics, reminded delegates that the Soviet authorities had divided the church, sending part of it underground, but that General Conference leadership had helped reunite it and that the church is now stronger than ever. “We hope that the decision that is reached will honor the sacrifice of our pioneers,” he said.

Unity was also highlighted by Peter Landless, director of the Health Ministries Department and the presenter of the morning devotional. At the worship service Landless told how he had once misspelled the word “united” as “untied” and realized: “If we are not united, we are untied.”

Other delegates voiced confidence that the church would remain united no matter what decision was made on ordination, and Wilson, in closing remarks at the end of the session, read Jesus’ prayer for unity from John 17:20, 21: “I do not pray for these alone, but also for those who will believe in Me through their word; that they all may be one, as You, Father, are in Me, and I in You; that the world may believe that You sent Me” (NKJV).*

Only one proposal to amend the General Conference session request was formally considered during Tuesday’s proceedings, and it was denied in a 184-96 vote. The proposal, made by David J. B. Trim, the General Conference’s chief archivist, was critiqued by three delegates who took to the floor to say it would tilt the question to be put to the 2015 General Conference session in favor of Position No. 3, one of three positions on women’s ordination that emerged from a two-year church-commissioned study of the issue. Trim helped draft Position No. 3. 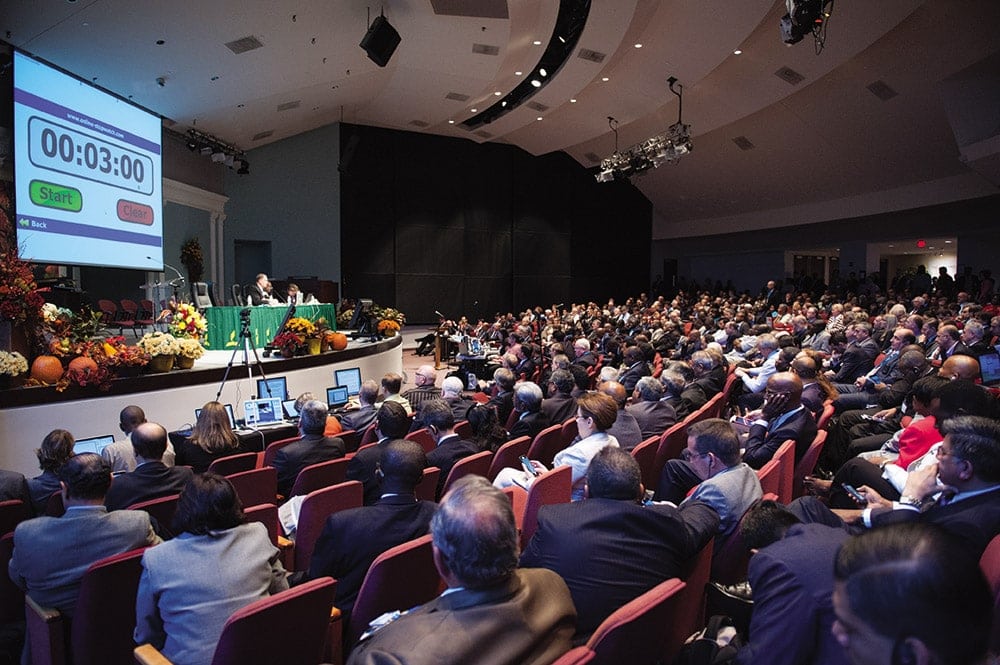 ON THE TIMER: Delegates got three minutes to speak from the floor if desired.">

David Weigley, president of the Columbia Union Conference, offered an amendment that would have allowed the delegates at the October 14 meeting to express their own preference about allowing divisions to resolve the thorny issue. Ryan, chair of the meeting, refused the amendment as “hostile” to the neutral intent of the question under consideration, and a parliamentarian, responsible for making sure that the proceedings followed the rules, indicated that Ryan was within his rights to do so.

The morning portion of the session was largely devoted to a review of the work of the Theology of Ordination Study Committee and 20-minute presentations of the three positions that emerged. The three presenters were Clinton Wahlen, associate director of the church’s Biblical Research Institute, for Position No. 1; Walla Walla University theology professor Carl Cosaert for Position No. 2; and Seventh-day Adventist Theological Seminary professor Nicholas Miller for Position No. 3.

Before the presentations, delegates strongly endorsed the report prepared by the Theology of Ordination Study Committee, or TOSC, in a 280-3 vote, with four abstentions.

Wilson, in an interview after the vote, appealed to church members and especially delegates to the General Conference session to prayerfully study for themselves, before the session, what the Bible, the writings of Adventist Church cofounder Ellen G. White, and TOSC have to say about ordination. “This is a sacred responsibility placed on their shoulders, because the Spirit of Prophecy says that the General Conference in session has high authority,” Wilson said.

The October 14 meeting—which opened at 8:00 a.m. and ended at 5:38 p.m. and included a two-hour lunch break and a couple short presentations unrelated to ordination—halted proceedings multiple times for prayer. Seventeen one-on-one and group prayers were offered.

Expectations were high ahead of the meeting. In-house television feeds and extra seating were prepared in the cafeteria and an upstairs meeting room for the expected overflow crowd. Building security officers dotted the corridors and stood near the exit of the main auditorium. Longtime General Conference employees said they had never seen such tight security.

Wilson even teased about it in his opening remarks. He said the General Conference wanted to conduct the ordination discussion in an open and transparent atmosphere, and, like every year, anyone was welcome to attend Annual Council. “As long as you can get past security, you’re welcome to come in,” he said to audience laughter

The main auditorium was packed for the morning session, but only modest numbers sat in the overflow rooms. When the session reconvened after lunch, the extra security officers had disappeared, and a few open seats appeared in the back of the auditorium.