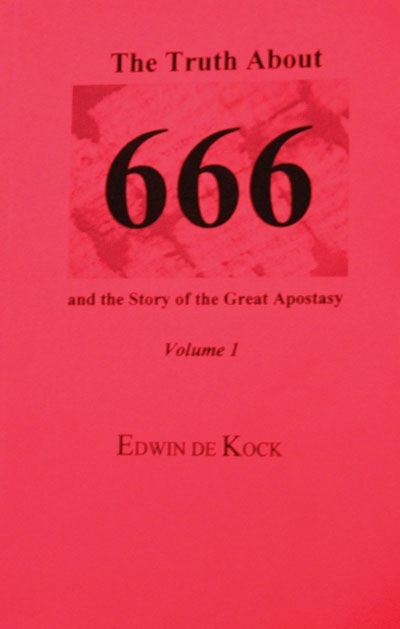 This trilogy on the enigmatic number 666 is a reprint of the 2011 one-volume edition carrying the same title in three volumes. It is the result of more than a decade of research, and easily is the most extensive treatment of the historicist interpretation of the number 666 in Revelation 13:18. Since the beginning of the seventeenth century many Protestant interpreters have identified 666, the number of the antichrist, with the Latin phrase Vicarius Filii Dei (Vicar of the Son of God), a title that has been applied to popes by Catholics and Protestants alike.

The first volume of this trilogy has three parts: The first section recounts the discovery of the Vicarius Filii Dei interpretation and discusses its use by Protestant interpreters. The second section describes the rise of the papal power; and in the third section the author investigates the origin of the “Donation of Constantine” document, where the phrase Vicarius Filii Dei appears for the first time, and examines its impact on religious and secular events in history. Volume two covers the history of the use of Vicarius Filii Dei, mainly by Catholic authors,in church history. In the third volume de Kock chronicles the use of this phrase in Adventist publications since the middle of the nineteenth century. The last volume also contains seven appendices covering such topics as the history of the three volumes, Catholic and Protestant publications on the topic, and “Philosophy as Theology.”

Vicarius Filii Dei appears first in the Donation of Constantine, a forged Roman imperial decree from the eighth century A.D., by which the Emperor Constantine (fourth century A.D.) supposedly transferred authority over Rome and the western part of the Roman Empire to the pope. Popes used it during the Middle Ages to support their claims of political authority. Lorenzo Valla, an Italian Catholic priest, is credited with exposing the forgery in the fifteenth century. That the numerical value of the letters of Vicarius Filii Dei adds up to 666, however, was not discovered until the seventeenth century. In the year 1600 the German classical scholar Andreas Helwig (1572-1643) published a book on 666 in which he listed several Latin names, used by or applied by others to the pope, whose letter values yielded 666, among them the name Vicarius Filii Dei (vol. 1, p. 53). Following Helwig, it was used by many historicist Protestants, including Seventh-day Adventists, as one of the proofs that the pope is the antichrist.

Whatever view one holds on the issue, the three volumes by de Kock are a veritable gold mine of historical information on this issue. Every Adventist interested in the meaning of 666 will benefit from reading this encyclopedic trilogy.

Article
Ellen White’s View of Other Christians
What kind of enemy is Babylon?