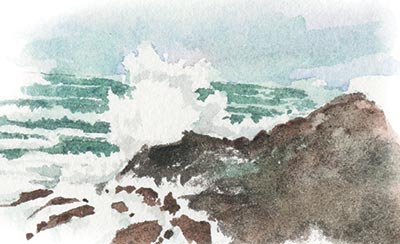 You may sleep a thousand years tonight.

No Abel-blood to stain your pristine vesture.

Nor shriek nor moan of rack-mounted, thumb-hung victim.

No stench of quivering martyr-flesh charring over its pyre.

Absent the taste of napalm flung in your face

and the fresh, raw abrasions of strip mines, the sting of acid rain.

You have received double for all their sins.

Forty days of downpour
and upsurge,
casting loose your tectonic plates to grind out later tsunamis,

even backpedaling without protest to reassure an ailing monarch.

And then
He came.
You cherished the pad-padding of His sandaled feet,

even gave back His friend Lazarus from your bosom

(How many dead does one earth need to shelter, anyway?).

When they killed Him, you retched,

spewing out legions of the holy dead, revivified to herald His gigantic victory.

And when His toes lifted from your skin, it wasn’t to have been
this long—was it?—until . . .

Sleep comes hard when everything is so disheveled, I know.

All your joints are askew,

your oceans wantonly ignoring His “thus far and no farther” sea-marks.

himself and his allies berating each other through the terrifying darkness.

For morning comes apace, and you’ll want to be refreshed for the endless, exuberant “rest of the story.”

After a score of half-centuries idling in your orbit,

He will come—a third time, no less!—and then,
after one last brief hour of ultimate folly,

purging away piling and pipeline, cable and deep-well punctures.

From your shaken core and your jumbled, formless void,

He can craft Paradise anew—
and He will!
And you will come forth, as once before, fit to host beauty, unity, perfection, love unendingly.
“And God Himself will dwell with them—”
your restored wholeness will be His eternal home!

You may sleep a thousand years tonight.

my room, my window

with the blue blinds,

with the cushions of the old beige sofa—

What I have built
I will break down,

our fort in the backyard

on top of the lowly apple tree with small sour apples

we picked and nibbled the beginning of each summer—

What I have planted
I will pluck up,

the kittens and their moms

that, Daddy, you said we should not feed

but you knew we would because they were hungry

and you wouldn’t want
Grizzly, Tiger, Puzzles, and Snowball
to go hungry. Especially Ears, whose lobes the winter frost
had bitten off—

I will pluck up,
that is, this whole land,

the ravine with the wild, stubborn grapevines

only pain for you, Daddy, trying

to get rid of them.

In the ravine I buried
Chippie
the chipmunk because he died
of a wound, and I wrapped him

in one of Mommy’s kitchen towels she let me use.

But I will give
your life to you
as a prize
in all places,
wherever you go.

I’m trying not to forget.

They both dreamed of owning a castle.

They both wanted a view.

Of course they would both build by the sea.

Wisdom chose a foundation of

Folly chose a foundation of

The house on the sand

was built to impress.

Though all dark within,

gleamed in the sun.

The house on the rock

was built to endure.

for its inner glory

With the night a storm thundered in—

a roaring lion seeking its prey,

Rain streamed down in torrents.

and slid toward a tryst with the undertow.

the tempest scurried away.

morphed into a lullaby.

From her lofty home

Wisdom looked out at the scene,

at the graceful curve

of the windswept beach

that cradled a quiet sea.

Third Place
Gray Is a Color,Too

On this blustery, rainy, winter morning

Remind us that gray is a color, too

The breasts of doves

The fur of kittens

Remind us that gray is the color, too

Father of us all, help us to remember that gray is a color, too

as we face our individual winters of the soul

Times when the warming sunshine of Your love

does not penetrate our clouds.

I don’t know exactly why I left.
One minute I was present,
frolicking and feasting with the flock,
the next I was battling the bramble bush. 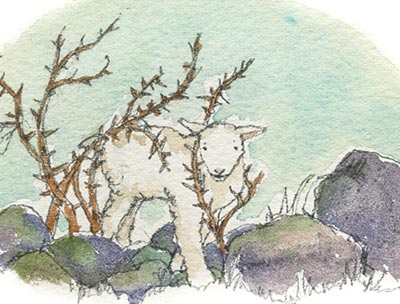 Heeding long my restlessness,
shaggy old rams tried hard to warn—
though spears look green,
they are not always good.
Long, fearsome tales they spun
of what befell all those who strayed.
But, reasoned I, though evil it may be,
what harm a tiny, teensy nip?

Off I went. No backward glance.
Watchful ewes took worried note,
blathering in vain.
I knew they’d tell the Shepherd,
and I didn’t even care.

Then I felt myself fall,
thick briars clutching at my coat.
My pitiful baas, far from listening ovine ears,
fell unheard on frigid air,
and I grew numb with bitterness.

How long I struggled,
without help, without hope,
I do not know.
I was lost and I would die,
a wasted wandering wretch.

And then—and then—
I sensed the Shepherd near.
Cowering, expecting His wrath,
I waited
for condemning words
that never came.

His hands did not recoil
as gently He applied the balm of mercy
to heal my loathsome wounds.

Now, secure upon His shoulders,
I marvel at His love,
thankful that we’ll journey home
together.