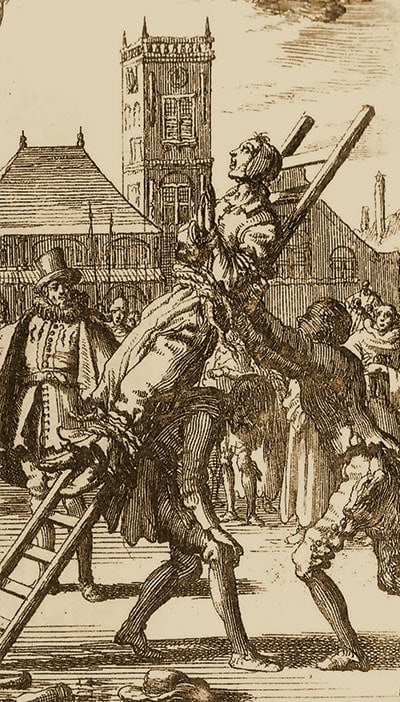 The gospel is good news, and tough news. It brings supernatural ecstasy and rough times. Joy and sorrow run together throughout God’s salvation program. It is the joy of travail that lets Jesus know He will be satisfied (Isa. 53:11). Travail is pain, but giving birth is joy. And as it is with Jesus, Prince of Peace, Source of joy, and Suffering Servant, so it is with those who follow Him.

The joy of knowing Jesus inspires internal struggles or wars with those whom we most dearly love. The privilege of proclaiming Jesus and the salvation He brings is, at times, accompanied by the pain of persecution. Jesus is life, but the world hates Him and hates His followers. As He warned His disciples: “If the world hates you, keep in mind that it hated me first” (John 15:18).

Always Been That Way

Evil has fought good on earth since the Fall, when the godly Abel, with faith in the promise of redemption, offered his lamb sacrifice on the altar.

Why did Cain hate his kid brother? Scripture gives us the answer: “Abel brought God a better offering than Cain did.” Abel “was commended as righteous, when God spoke well of his offerings” (Heb. 11:4), which infuriated Cain. Cain “belonged to the evil one and murdered his brother. And why did he murder him? Because his own actions were evil and his brother’s were righteous”

Receiving Jesus is transcendent joy, even as it becomes the devil’s basis for abusing me.

Abel’s life was gospel preaching to Cain. His continued existence was a perpetual reminder that salvation came from a source outside Cain. Life didn’t satisfy him, in the end, because he did what seemed best to him alone. Admiring nature and praising God for good-looking apples and mangoes was not enough to calm Cain’s nerves, ease his mind, and rest his soul. The gospel, God’s plan, is the only salvation plan that works. So God could accept only His own plan for saving Cain if He really wanted Cain saved. But it maddened Cain that just being Cain was not enough for God.

This hostility against the meek and obedient, by the rebellious, disobedient, and self-willed, has continued through centuries and millennia of human history. Notice Ellen White’s comment about the years that followed Christ’s establishment of His church on earth: “The early Christians were indeed a peculiar people. Their blameless deportment and unswerving faith were a continual reproof that disturbed the sinner’s peace. Though few in numbers, without wealth, position, or honorary titles, they were a terror to evildoers wherever their character and doctrines were known. Therefore they were hated by the wicked, even as Abel was hated by the ungodly Cain.”
1

The nation of Israel was God’s gospel depository. To them God entrusted His truth for saving the world, given to them through the institutions of the Sabbath and the sanctuary. The Sabbath stands as God’s memorial of Creation; a witness that He is Lord; a symbol and agent of His sanctifying power; a note of delight; and a representation of the spiritual rest we find in Jesus (Gen. 2:1-3; Ex. 20:8-11; Eze. 20:12, 20; Isa. 58:13, 14; Heb. 4:1-11).

The Sabbath brings the blessing of spiritual rest that we have in Jesus. Ellen White wrote about the Sabbath: “While it calls to mind the lost peace of Eden, it tells of peace restored through the Savior. And every object in nature repeats His invitation, ‘Come unto me, all ye that labour and are heavy laden, and I will give you rest.’ ”
2

Israel’s repeated failures were so many satanic blows against the good news. The devil attempted with Abel, and later with Job, to wipe out the faithfulness and goodness of God’s people he so intensely hates.

But the life of Jesus Christ, Himself the gospel, stands as incontrovertible human evidence that Satan cannot destroy righteousness, and that the final outcome of this contest in which God and goodness are assailed by Satan and iniquity is not in doubt. Gethsemane, fraudulent trials before the Sanhedrin, Pilate, and Herod; howling mobs of demons and demon-possessed humans; flailing Roman whips that bit into the flesh of God’s spotless Son; cheap betrayal for the price of a slave; rejection by the very descendants of Abraham to whom He belonged and whom He had come to save; being spiked to crude, strong wood, and stripped naked to hang before the scornful world—this was the ultimate in the battle between evil and good, the climax of opposition to the gospel.

Who emerged victorious? Ask if you wish. Jesus Himself has already answered. That’s why He could hang His head and die. But before He did, He lifted His head on Calvary’s cross, and cried out, with His dying, triumphant breath, words that will never cease to echo and reverberate across the farthest reaches of God’s universe: “It is finished”; “Father, into your hands I commit my spirit” (John 19:30; Luke 23:46). The gospel has won. The serpent’s head is crushed, and though he still rages, his thrashing tail is nothing better than death throes.

The Story of the Church

Sure, persecution continues. Even before the birth of Christ, Satan attempted to destroy the Baby who would “crush” his head. Later he stirred up the priests and their followers to reject Christ during His lifetime. Then, when Christ’s time had come, Satan stirred officials and people with rage, urging them to crucify Him.

God turned Satan’s cruelty to divine purposes. The stripes they laid on Jesus made the healing of the Jews possible. The joy of doing His Father’s will, the joy of seeing many saved, kept Jesus hanging on the cross till the end, even as passersby “hurled insults at him, shaking their heads and saying, ‘So! You who are going to destroy the temple and build it in three days, come down from the cross and save yourself!’ ” (Mark 15:29, 30). Why didn’t He come down? Because He knew He would “see of the travail of his soul, and shall be satisfied” (Isa. 53:11, KJV).

Why didn’t He come down? “For the joy set before him he endured the cross, scorning its shame” (Heb. 12:2). Being the bearer of good news for me included being the bearer of my shame. That is my good news—that my iniquity is taken away and my sin is purged (see Isa. 6:7). The joy and sorrow that run together throughout God’s salvation program ran together in the life and passion of Jesus, the Author and Finisher of our faith. His unavoidable grief at sin’s havoc ever moved Him to compassion (Matt. 9:36). And that sorrow at the sight of sin’s distorting impact was constantly countermanded by the knowledge that He was here to seek and to save the lost (Luke 19:10).

The book of Acts records the paradox of persecution and the thrill that His followers experienced. After the authorities’ harassment following the healing of a cripple at the Gate Beautiful, Peter and John returned to their fellow believers and burst into praise (Acts 4:23-30), so much so that “the place where they were meeting was shaken. They were all filled with the Holy Spirit and spoke the word of God boldly” (verse 31).

Receiving Jesus is transcendent joy, even as it becomes the devil’s basis for abusing me. This is what explains the believers’ praise. It was not masochism. It was having Jesus, and knowing, as they could later say after even more abuse, that “they had been counted worthy of suffering disgrace for [His] Name” (Acts 5:41).

Paul sums up his situation for his protégé, Timothy, in terms he saw as normative for all time: “In fact, everyone who wants to live a godly life in Christ Jesus will be persecuted” (2 Tim. 3:12). Which raises the legitimate question: Where is persecution now?

Are we persecuted today? If not, why not? Notice Ellen White’s informed perspective: “The only reason is that the church has conformed to the world’s standard and therefore awakens no opposition . . . It is only because of the spirit of compromise with sin, because the great truths of the word of God are so indifferently regarded, because there is so little vital godliness in the church, that Christianity is apparently so popular with the world.

It was the preaching of the gospel, under the Spirit’s anointing, that enabled Peter and the other Pentecostal preachers to baptize 3,000 converts in one day. As fire-baptized followers of Christ continued their gospel advance they turned the world upside down! Some historians say that 70 years after Pentecost there were about 1 million Christians in the Roman Empire! One in every 50 people had been converted.

But then something happened. Or rather, something stopped happening. The mighty missionary zeal of those early years faded, the movement stagnated, and there came an era of spiritual darkness caused by a “falling away” from the truth of the gospel.
4 The visible church had corrupted the gospel.

Ellen White observed, “The accession of the Roman Church to power marked the beginning of the Dark Ages. As her power increased, the darkness deepened. Faith was transferred from Christ, the true foundation, to the pope of Rome. Instead of trusting in the Son of God for forgiveness of sins and for eternal salvation, the people looked to the pope, and to the priests and prelates to whom he delegated authority. . . . Those were days of peril for the church of Christ. The faithful standard-bearers were few indeed. . . . The gospel was lost sight of, but the forms of religion were multiplied, and the people were burdened with rigorous exactions.”
5

Persecution caused many to deny the faith. Yet, as in Elijah’s day, there were always those who did not bow down to Baal (1 Kings 19:18). The Waldenses and Huguenots maintained the light of the gospel through the Dark Ages. They “cherished faith in Christ as the only mediator between God and man” and “held the Bible only as the rule of life.”
6They pointed souls “to Christ as their only hope of salvation.”7

Through the centuries it was discovering the gospel of life that continued to bring pleasure to those who found Jesus, and pain to them from those who hated goodness and truth. So it was with John Wycliffe, John Huss, Jerome, Martin Luther, and John Calvin, and others in the sixteenth century.
8 And because they built on Christ alone, “the gates of hell could not prevail against them.”9

Do we want and need revival today? Perhaps we have to revisit history, though there are places today where a passion for Jesus and a fire of torture burn together. God’s truth never changes; and the gospel will burn brighter in the world only in proportion to our belief in His gift to us! If Paul is correct, and if history is any witness, we can be sure that when the love of the gospel impels us as it did the early church, persecution will certainly arise. Only knowing the gospel’s joy can prepare us to withstand persecution’s pain. And “if you suffer as a Christian,” Peter encourages, “do not be ashamed, but praise God that you bear that name”