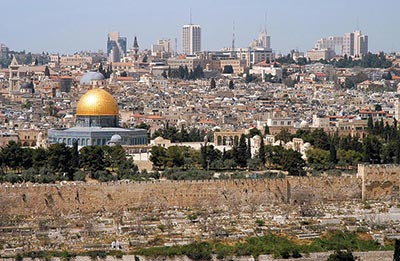 Salvation is very different from geography lessons. Geographically speaking, Zion was once a Jebusite fortress on the southeastern hill of what came to be called Jerusalem. Before David and God took it over, before women and men extolled it as the city of our God, the mountain of His holiness (see Ps. 48:1), it was a military stronghold from which rude Canaanites flung contemptuous language at despised Israelites (2 Sam. 5:6, 7). Zion is no name of inherently holy reality.

Medieval traditions produced confusion over its original location. A century and more of archaeology helped correct the error. We know now that medieval Zion, the traditional site of Christ’s Last Supper, on Jerusalem’s southwestern hill, was not part of the city until Hezekiah or Manasseh’s time. It could not have been David’s Zion four centuries before. But was the exultation of prophet and psalmist on the glories of Zion an obsession with geographical precision? Was it a mound of earth they sought to praise where the Lord who reigns forever sits enthroned (Ps. 9:11)?

Perhaps it was for nothing but a mound and the city that at times bore its name (see Isa. 33:20) that Jeremiah mourned. She “stretches out her hands,” he cried, “but there is no one to comfort her” (Lam. 1:17), because “the Lord has covered Daughter Zion with the cloud of His anger!” (2:1); “He has laid waste his dwelling like a garden; he has destroyed his place of meeting. The Lord has made Zion forget her appointed festivals and her Sabbaths” (verse 6).

But does Zion come all undone because Nebuchadnezzar ravages and Titus plunders? Not so. For there still is a Zion where God reigns forever; from which the Mighty One, God, the Lord, speaks and summons the earth; another Zion, perfect in beauty, from which God shines forth; from which He will come and will not be silent; from which He will summon heaven and earth, and judge His people; a Zion that will never fail to proclaim the righteousness of a God of justice (see Ps. 50:1-6).

Data may be at once factual and boring—numbers of hairs on heads where it grows, or grains of sand in the sea and on its shores. Or it may be both true and inconsequential—not all, but many a record-breaking weather forecast. It may be both accurate and interesting—what the major league baseball slugger batted the year before the year before the last. But salvation is very different from geography lessons or archaeological reconstruction or processed statistics. The data on Zion’s geography scarcely matters for the end that matters to the Lord. For in taking over Zion His focus is neither boring data nor interesting fact nor even historical and topographical precision.

For God the Lord, taking over Zion serves supernatural ends: when what was once the locus of contempt becomes a name synonymous with divine glory; when Zion, where the heathen insulted God’s anointed, becomes the place that saints may declare His praises and rejoice in His salvation (Ps. 9:14); when the place He was not welcome becomes the site of His eternal reign, when out of Zion’s hills salvation comes, then there is reversal of every curse of sin and the restoration of lost Eden.

God proves through Zion that He can fix any name and any place; but most of all He longs to and rejoices to fix people. He is not most keen on establishing archaeological precision, but on establishing His throne in each of our hearts, transforming us from uncouthness of nature into the beauty of His holiness. His thoughts are far higher than our petty territorial squabbles. Salvation is very different from geography lessons.