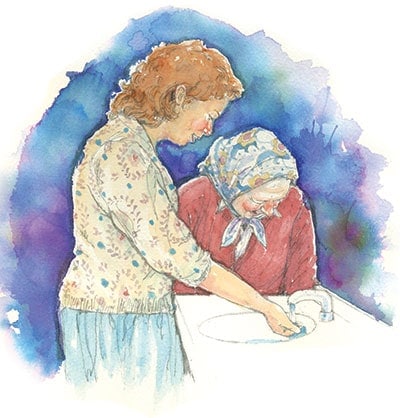 It was 9:30 on a stormy Friday night, and we were just leaving the church office when the phone rang. Our 14-year-old daughter groaned, and John, my pastor husband, debated whether to answer it. With the economy down, our church had been targeted by a flood of scammers, each with a sob story, all wanting cash for a bus ticket or gas. We always suspected a scam when they refused our offer to follow them to the station and help them pump the gas.

“I just want to go home,” my daughter, Carrie, muttered as she sank down in a chair, knowing it would be another 15-minute wait. “Friday nights are so boring, and I’m so tired.”

It had been a busy week. Just the night before, we had hosted nine kids from an academy gymnastic team at our house. They had eaten practically everything in our refrigerator and cupboards, and there’d been no time to replenish the pantry before Sabbath. Neither had there been time to change all the bed linens. We didn’t care. All we wanted was to crawl into our beds and crash.

“That’s very unusual,” I heard John saying to someone on the other end of the line. “I’ll see what I can do.” He hung up the phone, looked at us, and sighed. “That was the hospital. It seems they have a Russian family in need of some help. I don’t know if I should respond or not. It’s probably another scam.”

“That doesn’t make sense,” I told him. “Why would a Russian family be at the hospital trying to scam a church?”

“Yeah,” Carrie interjected. “Why did the hospital call you?”

Bit by bit the story came out. A Russian family had been flying to California. A tornado near Atlanta prevented the plane from stopping to refuel. The Russian grandmother on board the plane became upset, because not only was she leaving her homeland for good, but she was stuck in a turbulent plane feeling that her life, and that of her family’s, was about to be wiped out. Her blood pressure skyrocketed.

The plane finally landed in our small Columbia, South Carolina, airport out of necessity and called an ambulance to pick up the grandmother. Of course, the whole family disembarked too. The plane refueled and left. The hospital treated the grandmother, and was now stuck with seven foreigners who could speak very little English. The hospital social worker tried to talk to them, and the only words she could understand were “Seventh-day Adventists.”

“How in the world would somebody make up a story like that?” I asked.

“But, Daddy,” Carrie said. “What if it’s true? What if we were stranded in a foreign country? You would call the church to help.”

We were at the stoplight now. A right turn would lead us home to a warm bed; a left turn would take us to the hospital. “What do you want me to do?” John asked. “Put them in a motel? I have to preach tomorrow, and it’s already 10:00.”

I nodded. “Even our dirty house would be better than dumping them in a motel. How would they reschedule a flight? How would they get food and a ride back to the airport?”

“All right,” he agreed turning left. “To the hospital we go.”

Minutes later we drove into the parking lot. Two men and one woman sat on a bench by the door. Never had I seen a more dejected-looking group. “That has to be them,” I said. We hurried inside and found the social worker. Minutes later a nurse wheeled out the grandmother.

Suddenly we realized that our minivan would not hold both us and them. Not wanting to break up the group, I decided that Carrie and I would stay and call our assistant pastor to pick us up, while John carried the group to our home. As they were pulling out, the storm struck with full force. The fear on their faces was visible as the van drove into the blinding rain. Strong gusts of wind slammed the building. Carrie stared out the window while I phoned our assistant pastor. He answered in a quiet, sleepy voice. I couldn’t help chuckling as I tried to explain our predicament.

“You do know that it’s late and there’s a bad storm out there,” he reminded me.

“Yes, and I have seven tired, hungry, and frightened people on their way to my house,” I replied. What a strange Sabbath this was turning out to be! I looked over at my teenager, who was smiling. A boring Friday night indeed! She was having the time of her life. Twenty minutes later our ride appeared. The storm had knocked a tree down, and our associate pastor had to take a detour to our house.

When we finally arrived home, the family was sitting around the kitchen table staring at each other. “Welcome to America,” I said as I walked over to the grandmother and hugged her. “It’s going to be all right. Are you hungry?” I made the motion of bringing a fork to my mouth. They smiled at each other for the first time.

“What would you like?” I asked, hoping they understood something I said. After a few moments of whispering back and forth, one of the men spoke slowly, enunciating each syllable: “Tea, jam, and bread?”

My heart sank. The visiting gymnastic team had eaten all the bread in the house, except for a package of hamburger buns. I knew it would only make them feel bad if I tried to explain, so I put a kettle of water on to boil and toasted the hamburger buns. Fortunately, I always keep herbal teas on hand.

I can’t imagine what they must have been thinking. Newly arrived in the United States, a turbulent flight, a health scare, they disembark, and the plane flies off without them! They don’t know where they are, and the only hope they have is that people at the hospital understood them correctly and that these are truly Seventh-day Adventists.

After they had eaten, I took two of the couples upstairs and let them help me put clean sheets on my daughter’s bed and in our guest room. Then I took them to the linen closet and showed them where the towels were and how to operate the shower.

Then I went downstairs with clean bedding and made beds on the living room carpet and couch. I took the grandmother and showed her where the bathroom and towels were. Later I learned that to avoid overburdening me with dirty laundry, everyone upstairs shared the same towel, as did everyone downstairs.

By then it was nearly midnight. The three of us—John, Carrie, and I—collapsed in the one remaining bed and were soon asleep. The last thing I remember was thanking God that I had a box of oatmeal and maple syrup in the pantry, and four apples in the fridge. If I sliced the apples thin enough, it would do for breakfast; and, praise God, one of the Sabbath school classes had planned a potluck luncheon after church.

John introduced the family at church the next morning, and after he explained what had happened, the whole church gathered around to make them feel welcome. I learned that one of our young adults was taking Russian at college. He sat beside them and interpreted when he could. Goodwill washed over everybody. After the meal, one of the Russians pulled out pictures and showed us photographs of cakes she had made in her own bakery. I wondered if she would find a job in California baking cakes.

Hours later John called the airport and rescheduled the family’s flight. Knowing that it would be hard for them to find their way onboard, we received permission to walk with them to the gate. While waiting for their departure, I took the grandmother to the restroom and showed her how to operate the motion-sensor sink and hand-drying system. Her eyes opened wide when I waved my hand under the faucet and
water poured out. She laughed and hugged me.

The time came for them to board. Many handshakes and farewells were expressed in broken English. Tears welled in everyone’s eyes. It was hard to believe that less than 24 hours before, these seven people had been complete strangers. Now they were brothers and sisters in Christ. It was hard to express our feelings. The little Russian grandmother summed it up well when she placed her hand on her heart, then transferred it to my heart, then back to hers.

Ministering to this family blessed me, and particularly my teenage daughter, who learned that it is more blessed to give than to receive. I’m so thankful we didn’t turn away that night the storm hit. The biblical admonition is so appropriate: “Keep on loving one another as brothers and sisters. Do not forget to show hospitality to strangers, for by so doing some people have shown hospitality to angels without knowing it” (Heb. 13:1, 2).