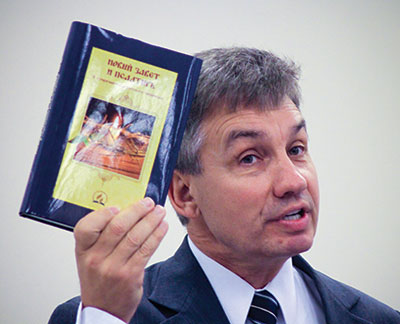 A colleague left two books on my desk the other day, which is not unusual in my line of work at a publishing house. What was strange was that I couldn’t read them. Since they were printed in Russian, though, that was not entirely surprising.

A few days earlier Mikhail Kulakov, Jr., had come to lead out in chapel for the employees at Pacific Press. He was here primarily for the dedication of the newly printed New Testament in Modern Russian, a project his father had been responsible for translating. During chapel Kulakov had described the process of placing the printed Word in the hands of God’s people, and had particularly mentioned the books now sitting on my desk. I was curious to see what they looked like, so I asked a friend to bring in the copies of the books that I knew she had at home.I picked them up carefully, marveling at the sacrifice they represented and the incredible faith of the men and women who had risked literally everything to put them together. They were produced by one of many “one-person printing presses” that operated during the time of Communist rule in the former USSR: testimony to what can be accomplished when we answer God’s call to obedience and service, no matter the cost. The example of Alla Shtabinskaya, the originator of the one-person printing press, poignantly illustrates this point.

Although she was just a teenager when she discovered the truth in God’s Word and became a Seventh-day Adventist Christian, Alla longed to find a way to share the message that had brought her so much hope. When someone mentioned the severe shortage of books in the Russian language, Alla felt called to master the English language and become a professional translator of religious literature. In spite of studying under the harshest conditions, Alla eventually graduated with a degree in English. Soon after, the underground Adventist churches sent her English copies of many books, including The Story of Redemption, The Desire of Ages, and the one I now held in my hands, Prophets and Kings.

Secretly, meticulously, Alla began to translate them. Under constant threat of arrest, she set up a primitive “printing press” in her apartment. It consisted of a desk lamp placed close to a typewriter, covered by several layers of blankets that served to soundproof the noise of the keys from suspicious neighbors. For hours Alla worked under the blankets, emerging occasionally for relief from the stifling heat. Soon, copies of these precious books found their way into the hands of people starving for light and truth. From Alla’s original translations, others took up the task of copying her work, often placing nine sheets of carbon paper between the thin layers of onion-skin paper. In this way the work went forward, one book at a time.

Alla was not alone in her burden for the people of Russia. Ellen White felt it too, and wrote, “Russia, the home of millions upon millions, whose souls are as precious in the sight of God as our own, who know nothing of the special truths for this time.”1 But God had His servants scattered throughout that vast land, including a young man named Mikhail P. Kulakov, Sr., father of the man who had recently come to Pacific Press.

Incarcerated for His Faith

Born in Leningrad in 1927 to a young Adventist minister, Kulakov, Sr., would go on to play a vital role in establishing the work in Russia. He saw his father convicted and sentenced to 10 years in a corrective hard-labor camp for his faith, and he knew he would likely share the same fate. A week before his twenty-first birthday he was arrested. His crime? He was a Christian who was willing to risk everything to share the news of Jesus with his neighbors.

Life was far from easy in the camp. With little food, many prisoners died from malnutrition and disease. Four or five times a year his mother sent a parcel of food, and into each parcel she slipped a Bible. For as much as Kulakov was starved for physical nourishment, he hungered even more for spiritual food. In his memoir Though the Heavens Fall,2 Kulakov, Sr., recounts the following story:

“One day a parcel arrived from my mother. I was summoned to the censor’s office, and stood by while he tore off the wrapper to examine the contents. There on top of the food packages perched a small, well-worn book. My heart stood still. It was a New Testament!

“ ‘What’s this? A Bible?’ the censor snarled. He grabbed the Testament’s shabby cover and with one yank loosened its elderly binding, causing most of the pages to cascade all over the table. But to my delight, two of the pages glided across the table toward me and floated to the floor.

“ ‘Please, may I keep this book?’  I asked, keeping my eyes on his face so that he wouldn’t suspect what had just landed at my feet.

“ ‘It is not permitted!’ he snapped, and swept up the tabletop pages into a little pile. As if by accident, I pushed some of the parcel’s wrapping paper to the floor, covering the two precious pages that lay there. When he’d finished searching my package, he handed it to me. I bent down and retrieved the wrapping paper—with the two pages tucked securely underneath—and wrapped it around the parcel. . . .

“Once inside [my barrack], I removed the wrapping paper with trembling hands. There before me were two sacred pages from the Gospel of John. The first words I saw were part of Jesus’ prayer for His followers: ‘Father, I want those you have given me to be with me where I am’ (John 17:24, NIV).3

“I can’t describe to you how I felt at that moment. My heart seemed about to explode. It was as though Jesus were including me in His prayer. ‘Misha,’ He seemed to say, ‘I don’t enjoy seeing you held a prisoner in this dirty, stinky barrack. I want you to be with Me in My kingdom of goodness and love.’ That single beam of celestial light, reflecting from those hallowed pages, penetrated the barbed wire and the high fences of the labor camp and illuminated my life.” 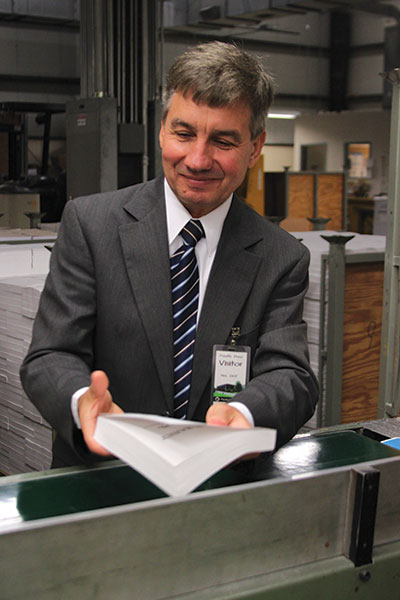 So great was his love for the Word and for millions of his fellow citizens who had no knowledge of God, that as a young man, Kulakov, Sr., dreamed of translating the Bible into contemporary Russian. This God-placed dream grew stronger through the years as he faced continued hardship under a system determined to erase all evidence of God from the experience of the people. Yet God had called him and continued to lead him through every trial.

Kulakov served five years of prison time, and in 1953 was released and exiled to Kazakhstan. About a year later, following the death of Stalin in 1953, Kulakov was released from exile. The next years were busy as he worked unceasingly for the Lord, often amid great danger to himself and his family.

By the 1980s Communism began to falter. In 1985 Mikhail Gorbachev became the leader of the U.S.S.R. and introduced many reforms that ultimately led to the breakup of the country, the end of Communist rule, and the collapse of the iron curtain.

Through a series of miracles, Mikhail Kulakov, Sr., along with his son, Mikhail Kulakov, Jr., led out in establishing the Zaoksky Adventist Theological Seminary in 1988, and soon after established the Bible Transla
tion Institute. His lifelong dream of translating the Russian Bible was becoming a reality. In 1990 Kulakov, Sr., became the first president of the newly established Euro-Asia Division of the Seventh-day Adventist Church, a vast territory that included 11 time zones populated by millions of people.

Two years later he resigned his church leadership positions in order to work full-time translating the Bible. Up until then there had been only one Russian Bible translation: the Synodal translation. This translation, completed in 1875, did not consistently follow the original text. The language was outdated and one century behind the literary language. Kulakov’s goal was to achieve accuracy, clarity, and ease of reading.

Imagine his joy when in 2000 the state publishing house in Mozhaysk printed the newly translated New Testament in Modern Russian. Two years later the New Testament and Psalms were printed in one volume. Sadly, just eight years later in February 2010, at the age of 82, Mikhail Kulakov, Sr., died of brain cancer. On the very same day, the first five books of the Old Testament rolled off the press.

The work of translating the Old Testament has continued with his son, Mikhail Kulakov, Jr., and the Bible Translation Institute. Kulakov, Jr., says, “I started working with my father in 2006, and I don’t know if in my lifetime I will [ever again] participate in anything as important, rewarding, joyous, or humbling as this project.” He is currently on a five-year sabbatical from Washington Adventist University (WAU), where he serves as a professor of philosophy and religious studies.

“The WAU Bible Translation Institute is an exciting initiative in international and interdenominational scholarly collaboration,” he says. “Together with the team of biblical scholars from various universities across Russia, the WAU Institute is leading in the project of the translation of the Bible into contemporary Russian language. The translation is already widely respected in Russia for its accuracy, literary quality, involvement of scholars from various denominations, and the team’s commitment to avoid denominational or sectarian bias.”

During his recent visit to Pacific Press, Kulakov watched the first copies of the Russian Bible—New Testament and Psalms—roll off the press. This print run is aimed specifically for distribution to the Russian-speaking community in North America, estimated to stand at more than 5 million.

In his prayer, Dale Galusha, president of Pacific Press, thanked the Lord “for the privilege of participating in a project that will help place the Word of God into the hands of people earnestly seeking to know the truth.”

As a result of this project, many individuals will be able to read God’s Word with understanding for the first time. The New Testament, Psalms, and the Pentateuch have already been completed and published, as well as the books of the minor prophets. The Institute plans to publish the new translation of the entire Bible in time for the General Conference Session to be held in San Antonio, Texas, in 2015.

To follow the progress of this project and receive regular updates, visit www.russianbible.org. Readers can contact Mikhail Kulakov, Jr., at [email protected]