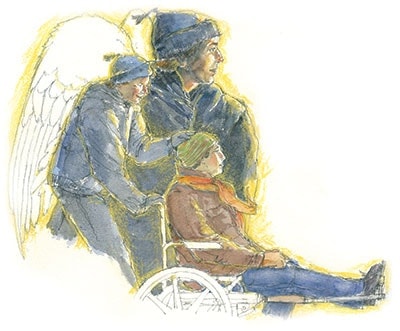 About 3:00 during the cold early-morning hours of a Friday in December I was driving as quickly as I could to Foothills Medical Centre, about 10 minutes from my house. The evening before, I had tripped and fallen on the walkway leading to a friend’s place.

At the time I had shrugged off the fall as a simple accident, given that there really wasn’t any bleeding. But after I retired for the night, particularly during the previous two hours, an awful, searing pain built up in my right knee. I decided to drive to the emergency room. Whatever the problem with my knee, I felt confident that the hospital would at least give me something that would help me deal with the pain.

Driving Through the Pain

The roads were empty and in excellent condition, the snow and ice having melted completely. Yet I seemed to be driving laboriously over every foot of highway. I clenched the steering wheel tightly, and fought the increased pain resulting from my foot pressing the pedals of my car. By the time I reached the University of Calgary, just three or four minutes from the hospital, I was holding my breath, afraid to relax my body’s brace against the pain. Then, most likely because I wasn’t breathing normally, I felt myself begin to pass out. Fortunately, I was able to prevent my car from veering off the road.

Soon I was on the drive leading to the main parking lot. Not a soul was in sight. No cars were in front of me or behind me as I pressed the button for a parking ticket. Fewer than 20 cars were parked near the parking lot’s exit, closest to the hospital. I carefully lined up my car in one of the parking places.

Opening the car door, I steadied myself on my left leg. I knew it would be an ordeal to remove my right leg from the car. As I bent down, holding my right leg carefully with both hands, I heard a man’s voice, clear and almost cheerful. “You look like you need a wheelchair. Hold on; I’ll get you one.”

I had my back to the voice, and so I didn’t see anyone. My first thought was that someone in the Christmas spirit was interested in being helpful, so I thought nothing of it. But as I carefully lifted my leg out of the car, I began to think it somewhat remarkable for someone to be just where I was at that hour, especially as I hadn’t seen any car lights entering or exiting the parking lot when I arrived.

As I leaned against the car, it occurred to me that the man must be from Foothills security. Perhaps a security patrol had seen my car lights coming into the parking lot, and had come over to where I was to see if I needed help.

At length I noticed a tall man in front of me, dressed completely in black, behind a large, padded wheelchair. I couldn’t quite make out whether he was kneeling or standing; he was bent over the back of the wheelchair and his arms were spread out over both armrests as he held it for me. His head was lowered, and I didn’t see his face, but I noticed strands of reddish blond hair sticking out from under his black wool cap.

“Here you go,” he said quietly as he pushed the wheelchair toward me.

I remember thinking that there was something irregular about the fact that I hadn’t noticed where he had come from. But it was dark and somewhat foggy, and I had all I could handle in maneuvering toward him without putting much weight on my right leg. I simply said, “Thanks,” and backed carefully into the wheelchair.

I noticed right away that the foot settings on the wheelchair were just right for me: the right foot setting was at the exact height and angle for my right leg to rest comfortably, while the left foot setting was down, enabling me to brace my left leg against the pavement and get into a comfortable position in the wheelchair. I also noticed just how strong this man was. Not only had the wheelchair not moved at all as I got into it, but the speed with which he wheeled me, in a perfectly straight line across the parking lot, was notable.

Also notable was the fact that the man didn’t say anything. He was the strong, silent type.

We quickly exited the parking lot and got onto the sidewalk running parallel to the hospital on our way to the emergency area. The lighting running the length of the sidewalk seemed to invite openness and friendliness. I thought I’d strike up a conversation and thank the man; perhaps offer him a tip. But every time I turned slightly to the right to talk to him face to face, a sharp, angry pain shot down my entire right leg. This happened several times. Eventually I just leaned back and said, “Thank you so much. I really appreciate your help.”

I thought we’d touch on what had happened to me, and from there introduce ourselves and perhaps share our plans for Christmas. Instead, he said in a steady, unaffected tone, as if there were no secrets between us, “No worries. This is just a diversion from what’s on our minds and hearts.”

That comment struck me as odd. It was spoken so directly, so filled with meaning, that it effectively checked all attempts at small conversation on my part. Just then the sliding doors of the Emergency Department opened, and the man wheeled me across the entire lobby to the far end, where the triage nurse was stationed. On the way I noticed how empty emergency was. Only a few people were huddled in corners, underneath coats and other coverings, waiting for loved ones who were still being treated.

As soon as we reached the triage area, we came to a gentle, full stop. Instantly I thought again that I must thank the man and try to see who he was. Turning to my left this time, I looked toward him, but he was gone; vanished into thin air.

As I took in this sudden, inexplicable disappearance, together with everything that had happened in the parking lot, a strange sensation crept up my spine. Conviction began to form in my mind. I asked myself what I would have done in my condition had this man not been there to help me. Then it occurred to me just what danger I would have been in had this man been a thief, or worse. I thought of Psalm 34:7: “The angel of the Lord encamps around those who fear him, and he delivers them.”

Just then the triage nurse was all over me with questions as she completed her preliminary assessment and sent me to registration. Then I was wheeled off to a waiting area, then to X-ray. X-rays showed a complete break in my right kneecap. The doctor showed me the X-rays. The torn ends of the broken bone were curled up, as if in extreme pain.

As soon as the doctor left, a cheerful, energetic nurse explained that I wasn’t going anywhere, that I was on my way to a semiprivate room, and that later that morning I would be off to surgery. She stressed several times that I was lucky that the surgeon on call was a knee specialist. “He’s very good; and your room is brand-new, in the renovated ward,” she smiled sweetly, summing up her plan for my life for the next three days.

After surgery, as I lay in my hospital bed with various drips and measurements happening intermittently, all I could think about was the man who wheeled me in the wheelchair. As I reflected on his appearance in the parking lot, the perfectly set-up wheelchair, and especially his impossible disappearance from the large, open lobby, my thoughts began to focus on his strange comment, that all of this was just a diversion from what was on our minds and hearts.

Our minds and hearts? Did he know that I do world intercession from a major city each New Year’s Eve, and was he with me in this? Did he know that I was booked for a flight to Houston soon after Christmas, and that, during the week leading up to New Y
ear’s, I’d be spending time at Galleria Mall, observing people, making an effort to think their thoughts and feel their feelings?

I determined that as soon as I was home and Christmas was over, I would phone Foothills security and inquire about the man. Part of me thought they must know him. But part of me knew what they would say.

I called Foothills security the next Tuesday. According to the person I spoke with, there are no special parking patrols at Foothills Medical Centre. No one from security was watching the parking lot that night.