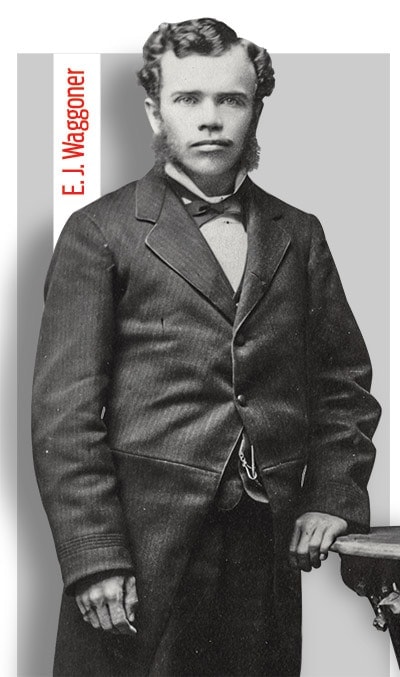 In October 1882, Waggoner experienced a “visionary” turning point in life when he “saw Christ crucified for me, and . . . that God loved me, and that Christ gave Himself for me personally.” The young doctor was convicted to dedicate his talents to full-time gospel ministry. As coeditor with A. T. Jones, of the Signs of the Times, he would play a major role in the subsequent revival of “righteousness by faith,” and the memorable 1888 General Conference session.

During the four years following the 1888 Minneapolis event, Waggoner, Jones, and Ellen White traveled widely, spreading the message of “Christ our righteousness” to North American Adventism. Then, from the spring of 1892, Waggoner served in Europe and spent the next 11 years editing the British missionary journal Present Truth.

He returned to the United States in the fall of 1903 and, against Ellen White’s counsel, eventually settled in Battle Creek. While he was there, his first marriage ended in divorce, and he left the ministry of the Seventh-day Adventist Church and lost his membership. He remarried in 1907 and died in 1916, leaving behind a distressing personal and theological legacy.

In an important statement in 1896, recorded in Testimonies to Ministers, pages 91-93, Ellen White laid out a wonderful assessment of the message of Waggoner and Jones, and its significance as affirming (1) the uplifting of Christ as Savior (not just lawgiver); (2) justification by faith in Jesus; (3) the connection between the righteousness of Christ and obedience to God’s commandments; (4) the need for Adventists to focus on Jesus and the importance of faith in His sacrifice; (5) that Christ’s righteousness, or “righteousness by faith,” has an intimate relationship to the third angel’s message of Revelation 14:9-12; (6) that Jesus has special “covenant blessings” for His children; (7) that Adventists had been emphasizing the law but neglecting Jesus; and (8) that God had raised up Jones and Waggoner to redirect the gaze of Adventists to Jesus, to faith in His sacrifice and merits.

How could the bearers of such a message end up in apostasy? The answer is instructive for the most gifted among us.

Their tragedy may be linked directly to the effective rejection of prophetic counsel. Along with this, Waggoner’s teaching came to involve extremely mystical and excessively subjective interpretations. He adopted an explicit “post-Fall” view of the humanity of Christ in early 1889, and later repudiated the “penalty/substitution/satisfaction” model of the atonement. His adoption of the mystical view of the atonement led him to understand justification as a subjectively “effective” experience. A believer is declared justified because the mystically indwelling Christ makes them truly righteous in character. This is similar to the Roman Catholic view as defined at the Council of Trent.

Waggoner’s heretical and morally compromising theology issued from this decline into subjectivity. He came to an extreme view of perfection, strong opposition to church organization—since individuals were to follow the Holy Spirit directly with no need for formal organization, false views on faith healing, a rejection of the traditional sanctuary doctrine, and ultimately to pantheistic views that led him to a species of mystical spiritualism that opened the door to personal moral failure. His tragedy was not inevitable. He might have listened to God’s messenger: “Believe his prophets, so shall ye prosper” (2 Chron. 20:20, KJV). n