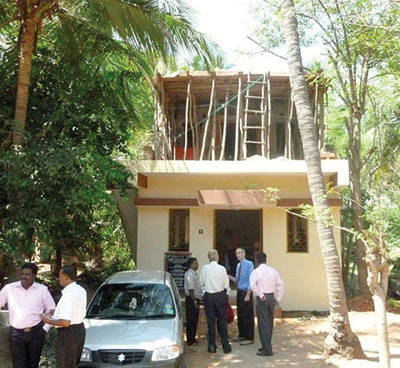 Where is this? And why is an upper room being built on top of the Adventist church?

The lower church is the Seventh-day Adventist hearing church in Pattukkottai, Tamil Nadu, India. The new upper room being built is a deaf church. Both groups will have divine worship services simultaneously since enthusiastic singing from one will not disturb the other.

Weary after a 10-hour drive from our son and new daughter’s wonderful but action-filled destination wedding, my wife and I arrived home and opened our front door to a distinct mildew odor. A quick trip to the basement revealed that water had flooded more than six inches throughout our finished, carpeted basement while we were gone—the water had been sitting there for at least five days.

In seconds my wife was on the phone bemoaning our predicament to our daughter, who relayed the news to our not-yet-3-year-old granddaughter. She told Maddi that Nana and Papa had a flood at their house. In words that put all the calamity into perspective and melted our anxiety Maddi inquired, “Did Nana see the rainbow?”

“We are losing a generation of young people because they see no value in pretending.”

—Pastor Wayne Morrison, in his sermon on April 20, 2013, at the Hutchinson Seventh-day Adventist Church, Hutchinson, Minnesota

In the early 1940s my daddy would take a week off from work and take our family to the Oklahoma Conference camp meeting. We stayed in tents, and I had a good time attending the primary-age programs and Sabbath school. I remember the church services during which the conference president would pray for so long that my knees would hurt from kneeling on the wood shavings. I also looked forward to going to the store every afternoon to get ice cream.