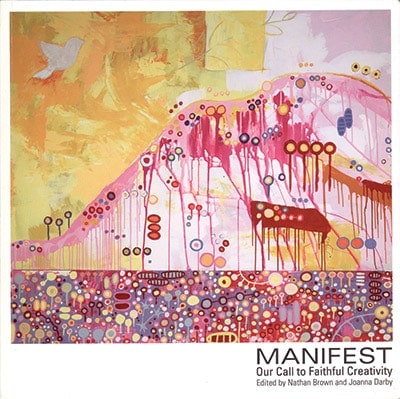 Most people see “creativity” and think “art.” Creativity is involved in the process of creating art, but they are not the same. Creativity is that process that takes the mundane and makes it memorable. It’s what happened when Jesus said, “A man was going from Jerusalem to Jericho . . .” Or when God said to Moses, “What’s in your hand?”

In Manifest: Our Call to Faithful Creativity, Nathan Brown and Joanna Darby have assembled 30 individuals who have demonstrated their talent at being creative in a number of media: academics, filmmakers, artists, photographers, musicians, ministers, and writers. The book is about creativity, but it’s also about how the creative process informs our experience as Christians, as well as our expression as Christians in an increasingly secular society.

In his chapter Neale Schofield writes about the many television channels available in the United States. “Sadly,” he writes, “we had difficulty determining which were more dull—the Christian channels or the shopping channels.” Proof that even though a church may have television, Internet, publishing, and artistic outlets, that doesn’t mean anyone is watching, listening, reading, or engaging.

The book is divided into five sections: Believing, Being, Serving, Sharing, and Living. And, depending on where you live, the authors of the essays are well known: Trudy J. Morgan-Cole, Bruce Manners, Andy Nash, Glenn Townend, Alex Bryan, Kay D. Rizzo, Gary Krause, Chris Blake, etc.

The basic premise of the book is simple: To reach a variety of people, you need a variety of expressions. And each of the chapters reveals how the different writers experience creativity in their own chosen form of expression. The strength of the chapters is that the authors speak from real-life experiences. They share their successes as well as their struggles. “Like the prophets,” writes Darby, “artists are often called to challenge the norms of society, to question politics and trends, and to point out the ugliest realities of our world. . . . The risk of reuniting calling with responsibility is that we are likely to be overwhelmed by the magnitude of the thing.”

Some of the chapters contain case studies, short vignettes in which the authors describe creativity as either observed or practiced.

Manifest is an outgrowth of the Manifest Creative Arts Festival, which for the last couple years has showcased talent in music, art, film, writing, and acting. The faces seen on the Web site (artsmanifest.info) are all young, a tacit admission that creativity is an essential ingredient in reaching other young people.

Manifest only scratches the surface of this important subject. The writers are  from Australia, the United States, the United Kingdom, and Germany, not yet including the creative expression of Adventist writers, musicians, and filmmakers from other parts of the world. But it’s an important first step.

The lesson of the first decade of the twenty-first century—especially in the industrialized countries of the world—is that the future belongs to the innovators. Faith, devotion, beauty, and literature won’t go away. But they will require creative new forms to communicate effectively.

This book is an excellent way to begin the conversation.